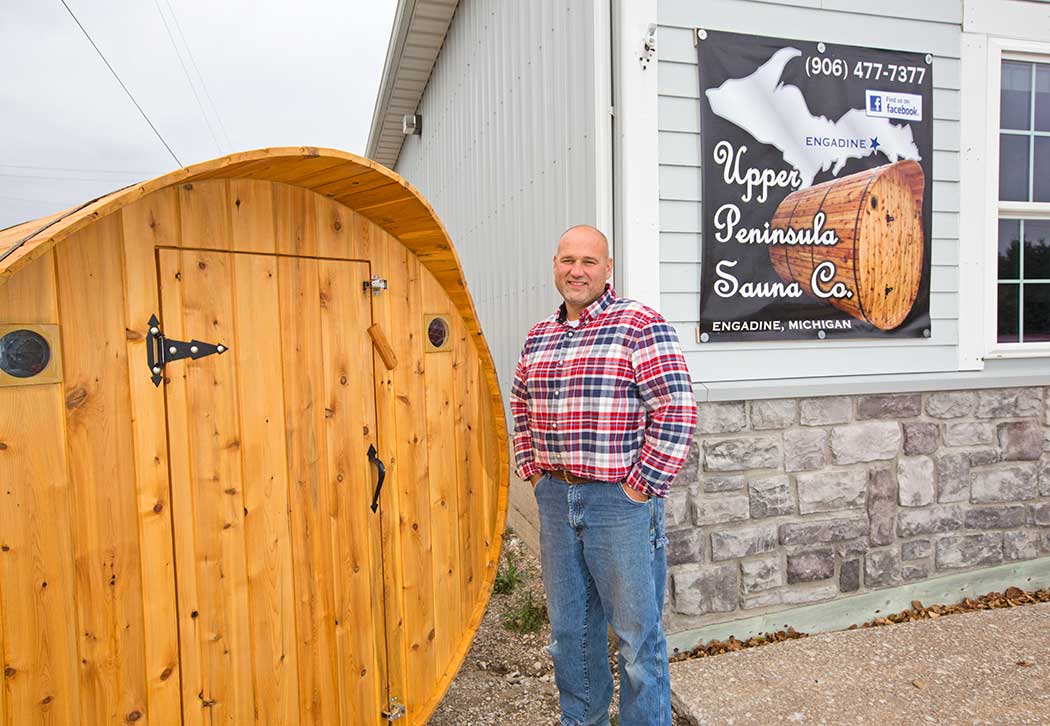 It’s 18 degrees outside. Steam rises from a large hole cut in the middle of Millecoquin Lake. A mixed group of younger and older people are standing around looking like they’re getting ready to go to the beach, except their lips are quivering and their teeth chattering. They’re getting ready to take the “Polar Bear Plunge” challenge to benefit the Engadine Intermediate School District.

Luckily, after their plunge, warmth awaits these “polar bears” in what looks like a huge wooden keg resting on its side on the frozen lake. The attractive, cedar-hewn structure is actually a sauna, built by the Upper Peninsula Sauna Company in tiny Engadine, MI. Saunas and polar bear plunges certainly aren’t new in the U.P., but this type of barrel sauna is definitely a novelty that is catching on fast because they are extremely mobile (trailerable) or can be stationary, and fit into most any lifestyle and landscape.

The saunas are manufactured by a seasoned crew of builders led by Zeak DeWyse, a local, licensed contractor and owner of DeWyse Construction. A Cloverland Electric Co-op member, DeWyse says he was looking for another source of income that would keep his crew busy when he latched onto the idea of building barrel saunas.

“It wasn’t my original idea,” DeWyse says about the sauna’s unique construction. “I saw one for sale on the west end of the U.P.” He also bought a barrel-shaped sauna from a backyard mechanic that he and his building crew used as a prototype. The saunas the DeWyse crew builds are crafted out of cedar felled from the woods near Engadine and sawn in local mills.

“It’s working out really well that my guys aren’t losing days from their income,” DeWyse explains. “When it rains everybody comes to the shop and we build saunas, so that’s been kind of a gift for our employees.”

Supporting local events is nothing new for the DeWyse company. They’re very much involved with the community, especially the schools, and helping other volunteers with fundraisers, parades, and similar events. The saunas are a good draw and have been used to raise funds for different causes. Besides the Polar Bear Plunge, DeWyse recently offered a barrel sauna to anyone who can make a hole-in-one during golf scrambles. The prize is placed on the designated hole.

Along with beating the winter blues, DeWyse adds, there are health benefits to taking a sauna, including removing toxins from your body and sweating-out colds, the flu, and sore muscles—and avoiding hypothermia after an icy plunge in a lake!