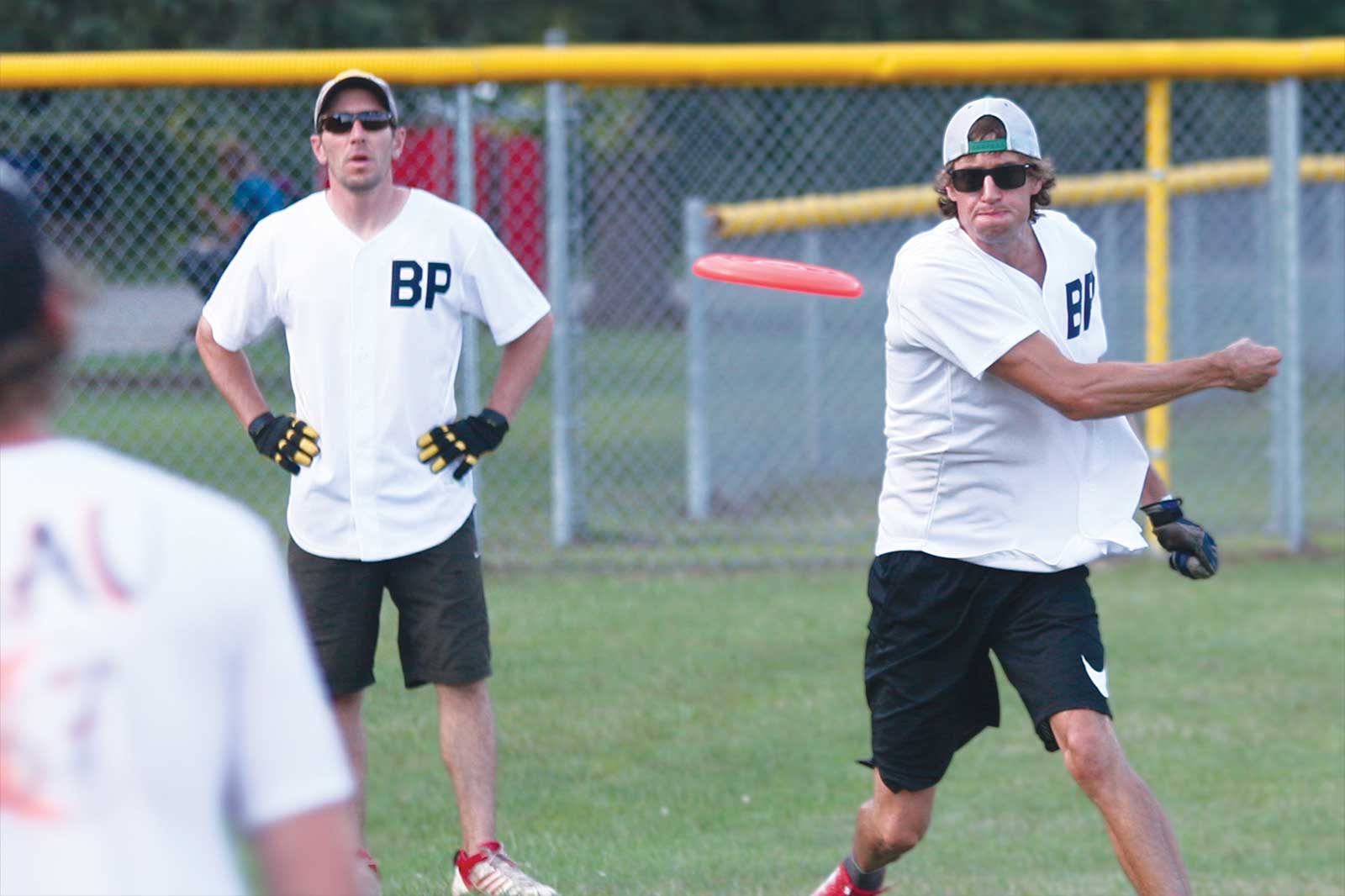 You’ve got to ask yourself—what does it take to stand in a line with four other people while someone with a steely gaze just 14 meters away throws an object at your head at a speed upwards of 80 mph? And not hit the deck, but instead, try to catch the flying object?

At the very least—it takes Guts.

It might sound like a crazy thing to do, but for the men and women who have discovered the little-known sport of Guts Frisbee, it’s an adrenaline high wrapped up in a family reunion.

Guts was invented in Michigan’s Upper Peninsula by the Healy family, who were looking for a backyard game using items they had around, as well as one that allowed them to hold their beverage of choice at the same time. Enter a couple of lines of people, a Frisbee, fast-flying throws, and one-handed catching. Its rules are simple, if not a little brutal sounding.

“Guts had become quite popular in the ‘70s and ‘80s when superteams were formed to win the prize money being offered,” said USA Guts Communications Director Donny Klemmer, Jr., who plays for Buck’s Brigade out of metro Detroit. “My first experience was actually with my mom, who was playing while pregnant with me.”

It’s that sort of hardcore grit and commitment to the game that has seen it through even tough times like its “lost decade” in the ‘90s. Guts was being played before its better-known counterpart, disc sports, became big. Ultimate Frisbee and disc golf have found devoted audiences, with ultimate appealing to the physically fit crowd willing to run lengths of a soccer field and lay out to catch a toss. Disc golfers are more inclined to pack up their drivers and putters and walk courses at a leisurely pace with friends or family.

“Guts is a great combination of the two,” said Klemmer. “It’s got the quick action and adrenaline of ultimate and the strategy piece of disc golf. It’s just happening simultaneously while someone throws an 80-mph disc at you.”

In 2007, Guts made a bit of a resurgence at the International Frisbee Tournament’s (IFT) 50th anniversary meet. What started with a mostly Michigan crowd has grown to other states and has good showings internationally. While sports enthusiasts may not have heard of Guts, it maintains a small but devoted following, allowing for the opportunity to play around the world at the highest levels.

Ryan Scott, who plays for the Boomtown Saints out of Lansing and is considered one of the top players in the sport, has traveled around the world with Guts.

“Never in my life could I have imagined when I started playing this sport, it would take me to London, Vancouver, and Japan. I’ve gone to Columbia to teach Guts, and just went to China to play in 2019,” said Scott. “When you travel for a purpose, you get a chance to experience not only the place but the people in a really unique way.”

With such an impassioned group of folks playing the sport and the promise that it’s accessible to those of all ages, it begs the question of why folks from around the country, if not the world, aren’t taking up this relatively inexpensive sport?

“The truth is, Guts can look intimidating at first, but once you get in there, you realize how much the folks are there to support you,” said Klemmer. “We want to get as many people as possible to have the experience not just of the sport, but the community.”

Scott echoes the sentiment and notes that if people reach out to the organization, Klemmer will put some discs in the mail (some traveling as far as Rwanda and Thailand) and try to find other Guts players in the area who can run an impromptu clinic. This sort of grassroots outreach makes a good case that this little-known sport could find another boom down the road.

“It would be great to see Guts featured on ESPN,” said Klemmer enthusiastically. “In fact, I’d love for it to become the first team sport on the X Games.”

Who knows, if these athletes keep showing up with the same level of passion, energy, and well, guts, it just might be.