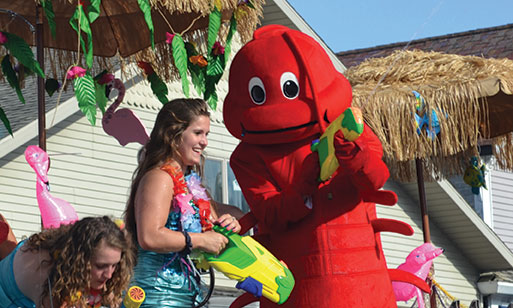 Quick! Name your favorite part of our state. Many will say the U.P., Leelanau County, or Grand Traverse Bay. My hunch is some will say, “the Thumb.” We wouldn’t be the Mitten State without a thumb, so let’s pay it some homage…

Phil Parrot, a Thumb native and owner of Parrot’s Tours (parrottstours.com or 810-376-9245), in Deckerville, sends vacationers to destinations worldwide, but he’s often asked about the Thumb area by other travel professionals. Parrot’s ready response is, “There’s the Upper Peninsula, Leelanau Peninsula, and Old Mission Peninsula, but the Thumb is Michigan’s undiscovered peninsula.”

Comprised of Huron, Tuscola, Sanilac, Lapeer and St. Clair counties, it boasts 150 miles of shoreline, 2,100 miles of rivers and streams, 51,000 acres of public recreation land, 49,000 acres of state game/wildlife areas, and many annual festivals and events.

Tour the Lake Huron and Saginaw Bay shoreline along M-25 with 160 miles of quaint towns and four lighthouses. The village of Sebewaing claims bragging rights as the “Sugar Beet Capital of the World” by hosting an annual Sugar Festival with a parade, carnival and entertainment tent. Caseville, near the Thumb’s tip on sandy Saginaw Bay, hosts the well-known Cheeseburger Festival every August. Algonac sits on the largest fresh-water delta in the world, with canals and an impressive 1,800 feet of boardwalk that credit its nickname as “The Venice of Michigan.”

And, visitors will want to explore the Sanilac Petroglyphs Historic State Park. The great Thumb fire of 1881, Parrot says, burned over 1 million acres and revealed prehistoric rock carvings made 300 to 1,000 years ago.

Seek a pleasant place by visiting it and giving a thumbs up for “the Thumb”!