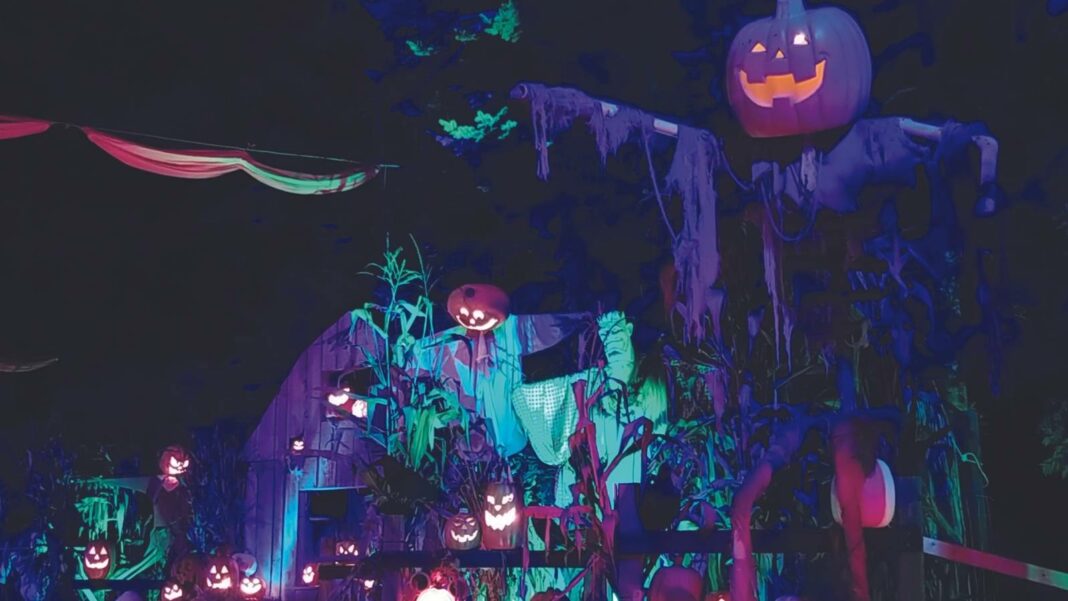 If you’ve ever wanted to walk through a giant clown’s head, the Halloween season seems like a good time to do it. And you can do exactly that and much more right now at Tee Lake Resort’s Halloween Spooktacular event in Lewiston, Michigan. The resort, a Presque Isle Electric & Gas Co-op member, celebrates its 12th year hosting the event. This seasonal spectacle is the brainchild of Andy Bauer and his husband Dave Gugel—who started it based simply on their love of Halloween, and then watched it grow into an extravaganza that attracts thousands of people a year. As Andy put it, “We created a monster.”

Dave, who grew up in Lewiston, met Andy when they both worked at Walt Disney World. They started investing in and making Halloween decorations when they first moved in together, and their collection grew steadily over the seven years they lived in Florida. They moved back to Lewiston in 2010 after Dave’s parents, who had managed the Tee Lake Resort since 1985, decided to retire. Andy and Dave took over the business, and when the busy summer months began waning in their first year of ownership, they used their extra time and abundance of seasonal décor to transform the resort into a haunted haven. It was a hit with guests and locals, and they began adding to it each year. Dave says there’s now about three acres’ worth of property decked out. “Every little spot of the place has something Halloween,” he said.

The Halloween Spooktacular is a self-guided, immersive (and free!) adventure that guests can either walk or drive through (walking better allows visitors to see all the details). The display is enhanced with light shows and eerie music, and it features six themed sections: Halloween Hootenanny, Voodoo, Day of the Dead, Abandoned Carnival (yes, featuring the giant clown head), Cemetery, and Trick-or-Treaters. If you’re really in the spirit, you can stay in one of the two cabins that are also decorated: Igor’s Hideaway and The Witch’s Cottage, as they’re known in October.

It takes about four weeks to physically set up the Spooktacular, but it’s really a year-round process. Andy and Dave—the resort’s only employees— keep busy cleaning cabins and working at their two gift shops, but they say whenever they have a spare moment, they’re prepping for Halloween. They’re constantly on the lookout for additional items and thinking of new spooky things to create. Andy is a graphic designer, and Dave is good at carpentry, so they’re able to bring a lot of their ideas to life. And then there’s the normal wear and tear that naturally affects a display of this magnitude that’s exposed to the elements. One item they regularly replace is the Styrofoam “tombstones” in the cemetery section. “For some reason, the woodpeckers love them and put holes through them,” Andy said.

The upkeep of the attraction is labor-, time- and cost-extensive, but Andy and Dave wouldn’t have it any other way. Andy loves being able to provide a method of escapism for visitors. “Whether they’re here for 10 minutes or an hour, it’s time when you can forget about your troubles and everything that’s going on,” he said. And Dave, as someone who grew up in the area and knows firsthand that there’s considerably less to do once summer is over, is happy to have created a sort of family tradition for the off-season. “There was a kid, maybe 5 years old, who after going through the display, went home and asked if he could do chores so he could earn money and donate it to us, and I thought that was the sweetest story,” Dave said. “I like to think about a kid who grows up and says, ‘Remember that place in the middle of the woods where at first it was pitch black, and then you turned the corner, and the trees were glowing and there were jack-o’-lanterns everywhere?’”