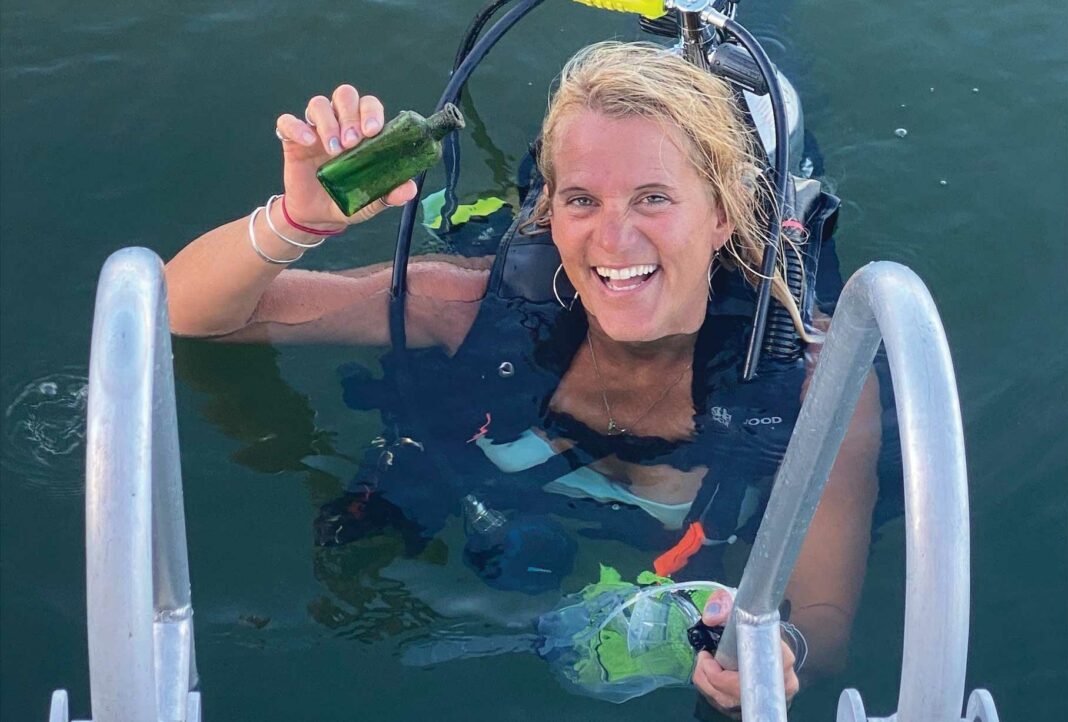 Dowker was at a crossroads, a single mom to three boys. Getting her captain’s license, buying a glass-bottom boat, and starting a business may not have looked like the most prudent way to support her family.

“I’d pitched the idea at Invest Cheboygan, like a ‘Shark Tank’ for small towns,” said Dowker. “Ultimately, I didn’t win and started thinking maybe I need to do something more practical.”

However, two days later, Dowker received a phone call from someone who had been in the audience and seen her pitch. He told her he thought she had what it took to make her dream a viable business. With his help, Dowker secured a loan, and Nautical North Family Adventures was born.

“I’d been homeschooling my boys and together, we’d put together a 38-page business plan as one of their projects,” said Dowker. “I had the foundation and thought—‘someday.’”

However, the fuel of the venture came more quickly than Dowker anticipated and was ignited by the passing of Dowker’s brother, Rick, who battled cancer for five months before ultimately succumbing.

“All of a sudden, ‘someday’ gained a whole new level of urgency,” said Dowker. “Before we knew it, we were taking people out on the Yankee Sunshine. My sons were all involved—helping in the office or welcoming and checking in guests. We were all coming alive.”

Nautical North Family Adventures offers shipwreck cruises with their glass-bottom boat, the aforementioned Yankee Sunshine, as well as lighthouse and river tours, scuba diving, kayak rentals, and other water-based adventures. Dowker will go out as many as five times a day and has already racked up over 900 hours on her boat. It’s a busy and rigorous schedule, but hard work never scared Dowker off.

“My mom always said, ‘I don’t care what other people are doing, you work harder and always do your best,’” said Dowker. “I’m constantly thinking that I can always do a little more.”

That same mindset and internal fortitude could easily be held responsible for a discovery Dowker made in June 2021. While taking a prospective scuba client out on the Cheboygan River, Dowker was diving and looking for a token for her passenger to take away with them. She came across a clam shell, which in itself is pretty cool, but looked for something even more amazing. As she pulled out a small brown bottle, she decided to go out one more time and came back to the boat with an old-looking green bottle that appeared to have something inside.

“Seriously, it was a message in a bottle,” said Dowker. “It’s just not the sort of thing you expect to find, even though you secretly hope you will.”

The message was from a young man named George Morrow, and after Dowker posted about it on Facebook, the power of the internet took over, and she was finally connected with George Morrow’s daughter—Michelle. Morrow had passed in 1995, but the message in the bottle brought wonderful memories back to his daughter just in time for Father’s Day.

“I love that I have had an opportunity to connect with people, to share the water I love, and to share this beautiful experience with my boys as well,” said Dowker. “But the biggest lesson I’ve taken away is that even when you feel lost or broken, go a little further. Push just that little bit more.”

Take it from Jennifer Dowker—there is treasure all around you, but there’s even more inside of you.