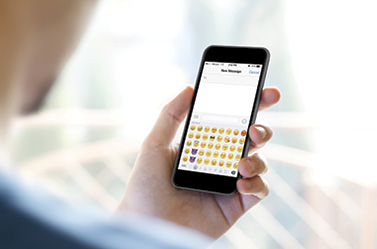 A few years ago my son stood before a display of old rotary phones in an antique store, puzzled by the seemingly ancient devices. “How did people text with those?” he asked. I chuckled before the thought occurred to me.
An entire generation now exists who’ve never known life without mobile phones, text messages, Google or social media.

In today’s world of technology a new digital language based on acronyms and emojis has emerged, allowing people to communicate instantly with little more than a few letters and characters. In the old days, we huddled around the handset during a long-distance call, everyone listening and talking at the same time because the calls were too expensive for everyone to have a separate turn talking. I guess I’m officially an old fogie! LOL

Mobile phones have become such an essential part of our lives, we have a hard time functioning without one. Like an extra appendage, we rely on a cell’s convenience, intelligence and sheer ability to do almost anything. Want to play Scrabble? Download the app. Want to enhance a photo? Download an app. Want to check Facebook? Download the app. Want to shop? Download an app. There are apps (short for “applications,” programs designed specifically for use on portable devices) for everything. Just ask my wife. She’ll tell you. SMH (that’s shaking my head for all you rookies out there.)

Our reliance on digital technology can only be ascertained when we forget our cell. Ever reached for your phone to make a quick call or send a text only to realize you left your cell on the charger at home? Panic ensues. I’ve actually broken into a sweat and driven an hour round trip just to have my phone on hand! 🙂

Times have sure changed since I was a lad. These kids might run circles around me when it comes to their smart phones, but I had something they didn’t. The most popular rotary phone ever made, an original Fisher-Price Chatter Telephone toy. And let me tell you, it was GR8!