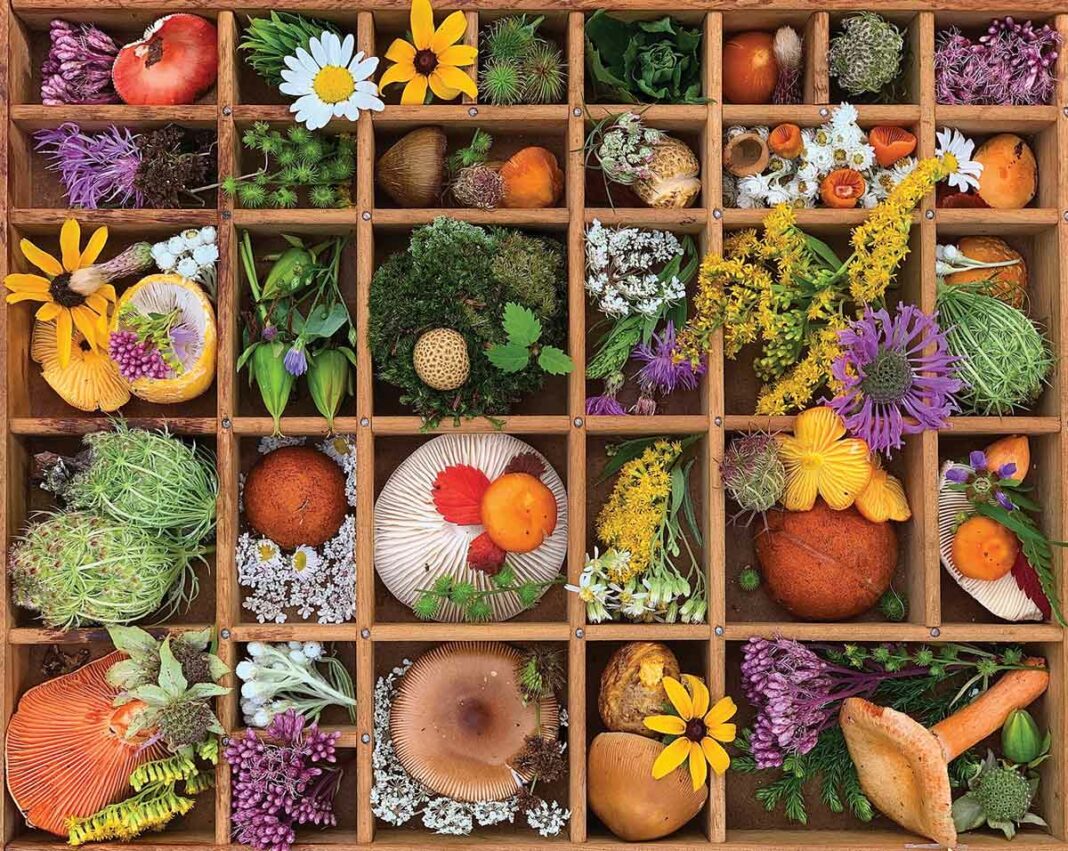 Mushrooms are unassuming and hard to unearth sometimes, but totally worth the time and effort to bring out into the light. A little like the woman who spends her days foraging for these earthy gems and the beautiful art she makes with them.

Sherrie Sanville, a member of the Alger Delta Cooperative Electric Association, didn’t grow up with a passion for fungi. But her husband, who like herself, is from northern Michigan, grew up foraging morels, and he introduced her to the practice of wandering their 120-acre property in Delta County for glimpses of the mushroom equivalent of gold.

On those walks, Sanville began noticing the wide variety of mushrooms that peppered the ground and trees all around her.

“My husband took me to some of his morel ‘hot spots’ and I couldn’t even see them the first time,” said Sanville. “But then I started to notice all kinds of mushrooms—and I got hooked. Especially when you see these pops of color—purple, red, yellow—I became a little obsessed.”

Sanville’s walks increased in volume, as did her identifying skills, although she’s quick to note she’s no expert, just an “enthusiast.” The enthusiasm prompted her to pull out her phone and start snapping pictures of some of the fungal treasures she happened upon. She’d then post them to Facebook for family and friends.

While some of her audience was less than impressed with what some considered “gross,” her dear friend, who was also a forager and gardener, planted an idea on how Sanville might share her fascinating finds.

To say that there were more than a few “like-minded folks” could easily be called an understatement. What began with quick snapshots in 2018 of her quirky finds on daily walks became something altogether different as Sanville tapped into her artistic side. However, she humbly argues she’s not an artist. Sanville began shooting gorgeous compilations of mushrooms she would gather, along with flowers and other found objects. Her following skyrocketed to an impressive 60,000 followers. It’s no wonder a company reached out to turn one of her images into a puzzle, while others have used some of her shots in greeting cards.

“I recently spoke with a mushroom magazine and they asked me how it felt to be an ‘influencer,’” said Sanville. “I just don’t consider myself that. It’s almost funny. I’m just a lady who walks in the woods and takes pictures.”

Sanville’s Instagram account is as organic as her topic and attracts people from all over the world, who crop up much like the mushrooms she features. If people are attracted, they are likely drawn in as much by her authentic curiosity and behind-the-scenes foibles as by the fascinating subjects she shoots. There’s a delightful post on a gorgeous pumpkin fairy house tableau she designed—that went up in flames thanks to the interior candle. Sanville shows the honest, sometimes cringing, truth behind the “Instagram-worthy” process.

So, it’s not surprising that she not only has fans worldwide, but that she’s made friends with people from across the globe.

“I never thought the mushrooms in my yard would lead to friends from all over the world,” said Sanville. “When you’re passionate about something, it’s amazing how you will always find a community that joins in with you. That has, for sure, been the best part of this whole process.”