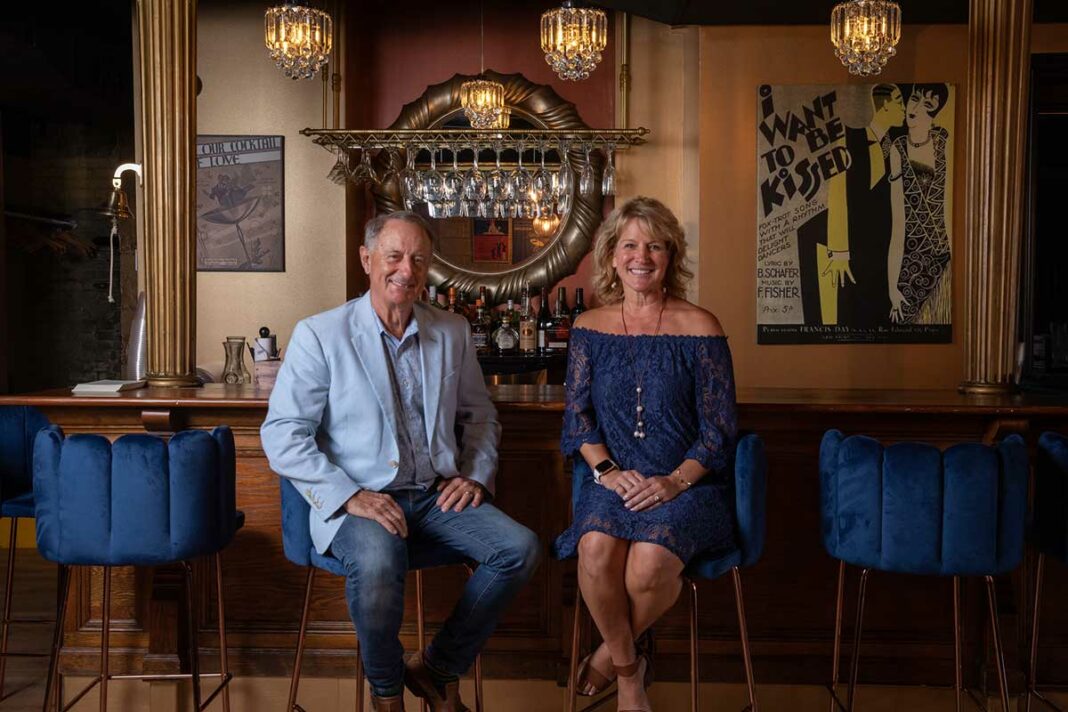 At a time when contagious is a bad word, there is something beautiful about the infectious joy that emanates from Marcella and John Costin. Their five adjoining businesses in downtown Cheboygan are definitely an extension of that joy.

Their unexpected, even magical beginning started on an airplane shuttle bus, where the two struck up a conversation that has lasted 23 years. The Costins have always loved to entertain and often spent their free time hosting gatherings in order to bring people together.

Striking out into business started simply enough with Simply Marcella, Marcella’s signature shop in St. Clare where they own a home. After discovering Cheboygan as avid boaters, the couple spent more and more time in the lakeside town and eventually hosted a couple of Simply Marcella pop-ups around the holiday shopping season in 2015 and 2016.

“Everyone we met was so friendly and supportive,” said Marcella. “Eventually some people in town started asking me if I’d consider something more permanent.” said Marcella.

The Costins did consider it. In fact, they purchased a building at 223 N. Main Street and opened a Simply Marcella in 2017. The couple immediately started dreaming up new ideas.

“Queens Head Wine Pub was something that we immediately wanted to do. The idea of hosting people consistently was so appealing,” said John. “But when we bought the next building, we weren’t quite sure what to do next. So, we started listening.”

The Costins launched Queens Head Wine Pub in 2018 (which officially resides on Huron Street, but connects with the building on Main) and while they were greeting guests and chatting up customers, they started hearing from folks what they’d like to see. When they launched Stormy Kromer: a Cap and Ale House in 2019 at 221 N. Main, the extra space still didn’t have an idea attached to it. The Pig ‘N’ Whistle came out of a need as the Costins were having trouble sourcing chocolates and confections that met their sweet tooth standards.

With the buildings connected and the ability for guests to literally walk through walls from one business to the next, one of the Costins’ favorite things is watching their enthusiastic team take customers on tours. Talking through the history of the buildings and showing off unique aspects of the space, folks get a bit of a sneak peek into the minds of John and Marcella themselves. With their most recent real estate acquisition, there was another opportunity to dream a bit more.

This time it was Marcella’s sister who had something to say as she remarked what might be missing was performance space in the area. They got advice from people in the industry and were set to open The Lark Theater in 2020. Just as the pandemic hit.

“We’d had this amazing fundraiser with a membership drive in 2019,” said Marcella. “So many folks came out and supported this place. It was definitely because of their generosity that we were able to get through the first year of the pandemic and keep the dream alive.”

While COVID-19 had plenty of curveballs attached to it, not all of them were strikes. One of the unforeseen homeruns was the addition of an outdoor bar, which was established in the parking lot behind Queen’s Head, cheekily called The Parking Lot Pub. The Costins had local carpenters construct some high-top tables, and along with additional seating and greenery, turned the outdoor lot into a cozy bar with live music. People came in droves and cemented the sort of supportive community John and Marcella had dreamed becoming a part of.

As for what’s next, it’s hard to say. The Costins are certainly not short of ideas, in fact they admit they have more than they could feasibly implement. Even with the amazing staff and support, it’s hard to know what the next big idea might be.

“We hate to put limits on anything we do,” said John. “Whatever might be next, we know anything is possible with our amazing customers and community. As long as they keep coming, we’ll keep showing up and listening.”