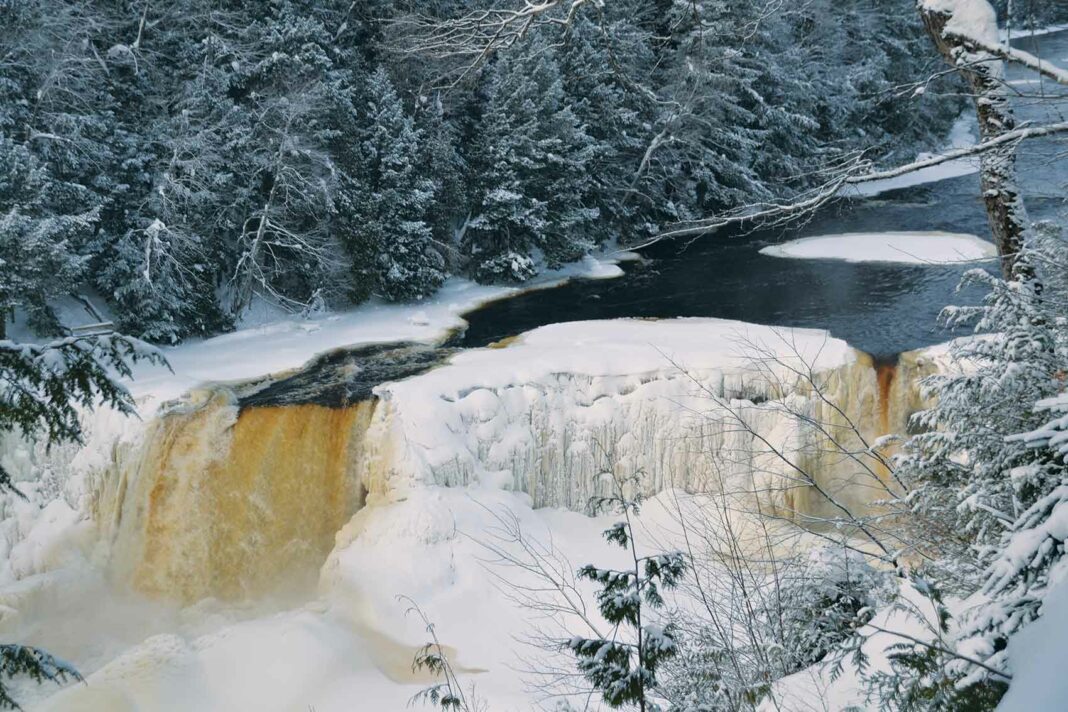 Hidden in the Upper Peninsula happens to be the state’s largest waterfall and the second-largest east of the Mississippi River (with Niagara Falls being number one)—Tahquamenon Falls. With 50,000 gallons of water cascading over the falls, it’s no wonder it hosts over 600,000 visitors annually.

For those who love a tongue-twister—it’s pronounced “Taa·kwuh·meh·nuhn,” and it was made famous in the Henry Wadsworth Longfellow poem The Song of Hiawatha. According to Native American lore, the origin of the name is attributed to the water’s amber color, resulting from tannic acid from the cedar and hemlock swamps that feed the river.

Aside from the astonishing name, the falls themselves offer mouth-dropping beauty and splendor. Nestled in Tahquamenon Falls State Park amid 50,000 acres covering more than 13 miles, the Upper and Lower Falls of Tahquamenon offer an otherworldly view. And this might be the perfect time to enjoy that view, as the park is not nearly as crowded in the winter as it is in the other seasons.

Winter activities at the park include camping (the campsites are open year-round), cross-country skiing, snowshoeing, lantern-lit trail walks hosted by the park staff, and of course, visiting the falls, which also run year-round.

No matter what time of year you go, though, your visit will leave a lasting impression. “When you’re approaching the falls, you first hear the sound—the water flowing and falling,” said Theresa Neal, park interpreter at Tahquamenon Falls State Park. “Once you approach them, you’re then struck by that unique amber color. It’s so unusual and visually striking. You never forget it.”

Tahquamenon Falls is divided into two sections. The Upper Falls are surrounded by a quarter-mile trail and just a 94-step climb to the viewing platform. There, you can get a look at that 50-foot drop and feel the spray on your face. Those looking for an additional challenge can snowshoe off trail for a snowy adventure.

The Lower Falls are four miles east of the Upper Falls and offer great views and photo ops. The Lower Falls are a one-mile walk from the parking area that takes you through the forest and lands you on the multiple viewing platforms for more spectacular sights. You can also rent rowboats at the concession station to access the island during the summer only.

“Obviously, the falls are the big draw,” said Neal. “But there’s so much to do and explore. Nine miles of marked snowshoe trails, a groomed cross-country ski trail, lots of photo opportunities, and even a brewery.”

When you’re looking at sharing this natural wonder with over half a million people a year, it’s good to look at the best time to visit.

“I’m always reminding people we’re open sunrise to sunset,” said Neal. “So, I really recommend coming early or later in the day to avoid crowds. And not to be afraid to visit off-season. From December to April, it’s almost like having the park to yourself.”

While the monumental views bring in visitors, Neal thinks there’s something else that draws folks out to the wild.

“I see generations of families come out to the falls year after year,” said Neal. “The world can move so fast, but when you’re out here, there’s time to breathe and just be with one another. Making memories is the ultimate way to slow things down.”