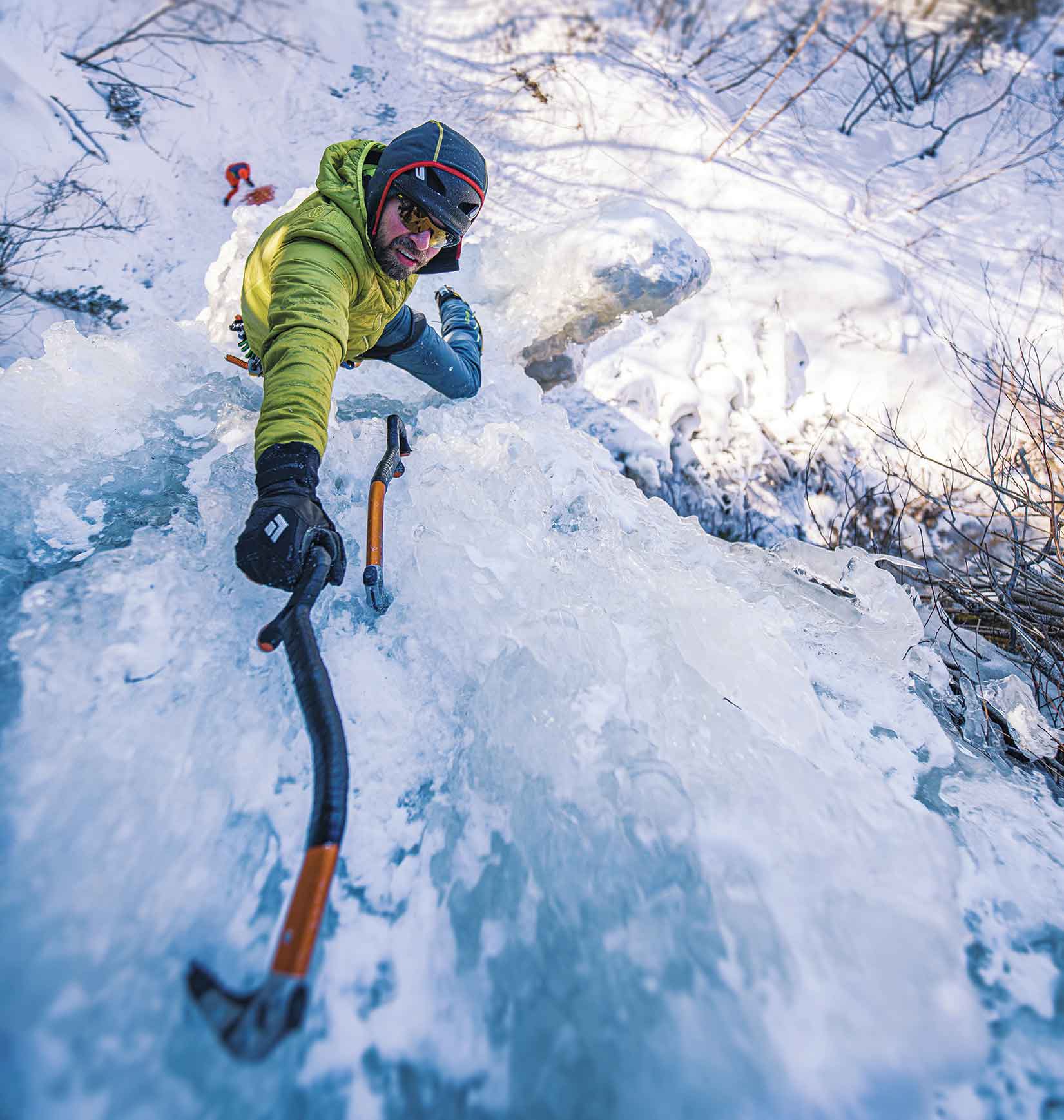 Many people travel to gorgeous Munising, Michigan, in the state’s Upper Peninsula to experience the beauty of the infamous sandstone cliffs of Pictured Rocks off the shore of Lake Superior. Whether by boat or kayak, people bring their cameras and smartphones to snap a shot of the remarkable natural wonder.

Then there are those who travel to Munising, Michigan, to capture an experience in an entirely unexpected way.

From Feb. 9–13, Michigan Ice Fest will be celebrating its belated 30th anniversary (due to COVID-19) with its weeklong ice climbing event that brings famed ice climbers as well as curious newcomers from all over the country and the world. Ice climbing may seem like something reserved for rugged mountaineers among arctic landscapes in faraway lands, but the Munising ice festival mixes awe-inspiring terrain with a tight-knit community feel that is nothing short of Pure Michigan.

“For over 30 years, people have been coming to the festival,” said Bill Thompson, one of the organizers of Michigan Ice Fest. “And every year, there are people who walked away shocked that we have some of the best ice climbing in the lower 48. They come in wary and walk away family.”

Michigan Ice Fest, which claims to be the oldest ice festival in the country, started with Mark Riesch, an ice climber out of Kalamazoo who returned from a festival in Canada and wanted to recreate something like it in Munising. Riesch passed out a homemade flier inviting folks to join in and managed to wrangle up a whopping 20 or so people the first year. Among them was Bill Thompson. As a new guard took over the event, it gained interest and grew. In 2019, the event drew over 1,600 climbers from seven different countries, and anyone who has attended Michigan Ice Fest will tell you there is something particularly magical about the Munising event.

“Michigan might not seem like the obvious spot for ice climbing,” said Thompson. “But there’s nowhere else where you can climb 160 feet with open waves thundering below you that are biting at your feet. Exciting is an understatement.”

This unique atmosphere has led to considerable interest from the climbing community. The event itself has grown over the years, now offering presentations and clinics led by world-class, professional climbers, book signings, and coffee talks in the mornings, as well as lots and lots of climbing. While the pros and hardcore climbers enjoy some of the finest ice climbing in the country,
the festival still puts a lot of focus on the novice climber, offering free gear and instruction as part of the price of admission. Not to mention an opportunity to watch and learn from some of the best ice climbers in the world.

“It’s like if you went to a basketball clinic and Michael Jordan was there giving you tips,” said Thompson. “And then later, you see him around town and get to have a beer with him. That’s how casual and inclusive this event is.”

The coziness of Munising seems in complete contrast to the adrenaline-heavy activity that brings everyone to town, but the city offers that perfect setting for what Anderson describes as an annual family reunion.

“It’s a tight community. When you come to the event, it’s like being with family,” said Thompson. “Our pro athletes have climbed all over the world, but feel something different and refreshing at our event. Our new climbers feel like they’re a part of the group from day one. It’s hard to explain, but it’s like going home.”

While a mammoth ledge of ice might not seem like an obvious homecoming spot, Thompson assures those with even the slightest interest that the event aims to bring people in slowly.

“It’s a chance to do something that not many people get to experience,” said Thompson. “As an ice climber, you’re definitely in a minority of folks in the world. But when you hear the axe bite in, and you kick into the ice with the sound of water running behind it—all I can say is you just can’t know how special it is until you try it.”

Visit michiganicefest.com for information on registration fees, event times, clinics, and more, as well as a list of available scholarships, grants, and contests.