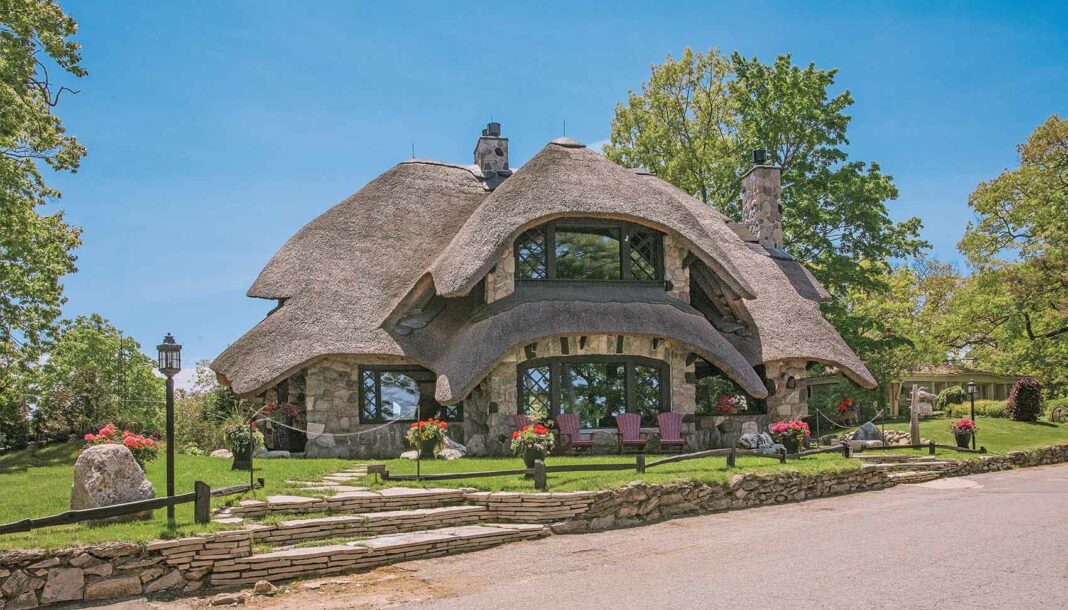 When you turn the corner to the charming cul-de-sac and first spy the houses perched one after the other at an almost fairy-tale level—words like charming and quaint are almost impossible not to use. It harkens to Middle Earth or Narnia, and one expects hobbits, dwarves, or fauns to wander out and offer you a cup of tea and biscuits after your long journey.

However, these homes designed by architect Earl Young, often referred to as the Mushroom Houses, aren’t found in storybooks or magical forests, but rather right in the heart of Charlevoix, Michigan. And one doesn’t need a magic wardrobe or ruby slippers to reach them—they are available to visit in small electric GEM vehicles, complete with a tour guide.

Edith Pair owned an art gallery for years in Young’s Weathervane building and was flooded with curious out-of-towners trying to find “the mushroom houses” (dubbed for the curvy, overhanging rooftops)—something they’d been told not to miss while in town.

“It was a lightbulb moment. I just thought, I could take people to see them,” said Pair. “We started with walking tours in 2006, then got into horse and carriage setup, and now we have our GEM cars. It’s so great to be able to take people around and tell them about this really interesting piece of artful architecture and history we have in Charlevoix, and then give them tips on some other things they should see or do while in town.”

Pair’s tours give a wide range of information on Young’s unique journey to his vocation, as well as a look at all of the houses in town.

Earl Young grew up in Charlevoix, a self-taught architect and builder who constructed 26 residential homes and four commercial properties. He notoriously scavenged Northern Michigan for large boulders, limestone, and fieldstone, and constructed his unique structures to blend in with their natural surroundings. Given that his career lasted over 50 years and he built well into the 1970s, Young’s homes are easy to spot. His buildings feature wide, flowing eaves, exposed beams and rafters, and a horizontal design that harkens a bit to Frank Lloyd Wright.

“My dad knew Earl Young,” said Pair. “There are so many great stories about his work. He used boulders up to several tons, which he’d haul out of the lake with workhorses and chains. I mean, can you imagine?”

Pair isn’t alone in her wonder and amazement at what Young managed to accomplish with the tools and machinery available to him.

Mike Seitz, a South African architect, came from his home in Texas to visit his wife’s parents in Charlevoix. Once he caught sight of the Mushroom Houses, he couldn’t leave until he bought one. His reimagining of four houses, including one designed by Young’s daughter, Virginia Olsen, garnered some attention, particularly as he imported thatched roof specialists from Europe to install natural, yet durable, rooftops. The four Young properties sit dispersed, each different while sharing the imaginative design of the bold architect. Each one is bespoke, with exposed rock and beams, and available to rent for private stays. Guests should be prepared to duck occasionally, as Young’s Mushroom Houses have notoriously low ceilings, presumably because he himself was fairly short.

Pair would love to include more interiors in future tours, but for now, people still get to enjoy the one-of-a-kind spectacle of the Mushroom Houses.

“It’s a privilege to share the stories,” said Pair. “I’ve seen some people hop on the tour prepared to be bored, but once they hear the stories, see the stones that were almost magically moved and maneuvered—everyone becomes mesmerized. Even me, still, after all this time.”

The houses offer whimsical views and rich stories, and are a testament to Young’s own inner voice that encouraged his desire to build something unique and lasting. Each home has its own character, and the man who built them believed their natural elements were the magic behind the masonry.

“Stones have their own personalities,” Young told a reporter for the Detroit Free Press in 1973. “People say I’m crazy when I say so, but they really do.”

For more information or to schedule a tour, visit MushroomHouseTours.com