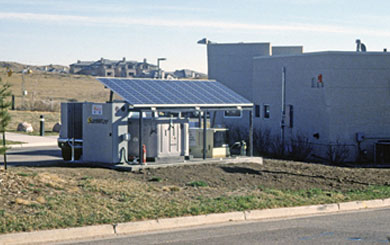 Renewable energy like water, wind, sun, biomass, the earth’s heat, and hydrokinetic (uses flowing water to make energy) sources like tides and ocean waves replenish themselves. And when it comes to generating renewable electricity for rural America, electric co-ops are leading the way. Electric co-ops receive 13 percent of their power requirements from renewable resources compared to 10 percent for electric utilities as a whole.

Renewable energy has its share of challenges, however. “Green” power resources don’t exist everywhere or in sufficient quantity to “keep the lights on all the time.” There’s also a need for more transmission lines to move renewable power from the places where it’s generated to population centers, and for new technology capable of storing electricity produced by variable wind and solar facilities as a way to make them more reliable forms of generation.

The North American Electric Reliability Corporation (NERC), which oversees reliable operation of the bulk power grid covering the United States, most of Canada, and a sliver of Mexico, estimates 39,000 miles of transmission lines need to be built by 2019, with 27 percent dedicated to connecting renewable resources to the grid. Yet, getting these lines constructed poses major regulatory and community challenges. Already, NERC claims that almost 6,500 miles of planned transmission lines are delayed, with the typical delay lasting up to three years.

Meanwhile, the U.S. Energy Information Administration’s (EIA) 2012 Energy Outlook (see 2013 Annual Energy Outlook Preview at eia.doe.gov/forecasts/aeo/early_elecgen.cfm) forecasts the share of generation coming from renewables (including hydro) will grow from 13 percent in 2011 to 16 percent in 2040—mainly in the form of wind. But less than 25 percent of this renewable capacity will be available when consumers need it most, notably during times of peak demand, highlighting the need for research into developing advanced energy storage options (see “Batteries Are Included”).

Electric co-ops are working closely with others to remind Congress to keep the affordability of electric bills in mind when debating energy legislation. A sound approach to renewable energy remains an important element for consideration.