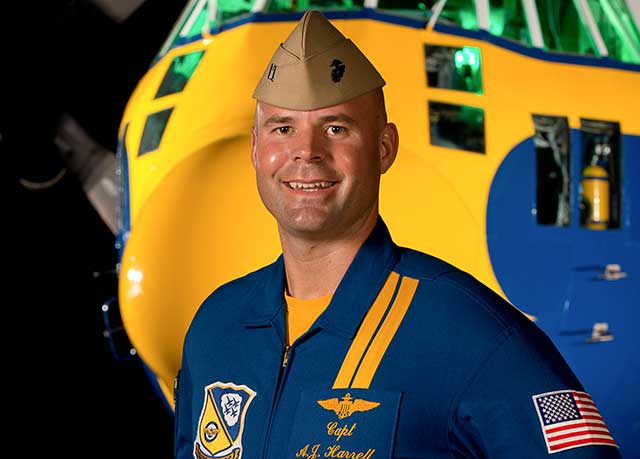 A.J. Harrell decided early in life that he didn’t want to sit behind a desk.

Strapped into the cockpit of a C-130 aircraft, he now works at executing maneuvers at 400 mph and fighting G-forces that double his bodyweight, which pretty much takes care of that aversion to desks.

But Blue Angels pilot Capt. Harrell sees a mission beyond the roaring engines. “The folks at our shows see that I’m just a guy in the cockpit. I’m from a small town (Frederick, Md.), I went to college in the middle of nowhere (Anderson, Ind.). I’m proof that a job like this is not outside the grasp of the average person.”

Just before heading to Traverse City, Capt. Harrell came down from the clouds to talk to Country Lines about the Blue Angels. Like Harrell’s achievements, the breathtaking precision of their flight acrobatics is the result, he emphasizes, of hard work. To air show spectators, it’s 48 minutes of magic, but in reality, he notes, “We practice endlessly; talent is not enough.”

While the primary mission of Harrell’s C-130 is to give the squadron logistical support, the plane is also part of the show. Fat Albert starts the action with an 8½-minute flight demonstration that showcases its tactical capabilities.

Flying in tight formations, the squadron’s six Boeing F/A-18 Hornets reach speeds of 700 mph. Fat Albert chugs along at 400 mph. Between shows, the Blue Angels—named after a 1950s New York night club frequented by pilots—don’t stand still, either. From mid-March to mid-November they typically travel to 35 U.S. towns, doing 70 shows for 11 million spectators.

Based in Florida, Harrell regrets being away from his wife and children so much. “I’m on the road 300 days a year,” he says, but adds that 10 years in the Marines has taught him to accept travel as part of the job.

The automatic spending cuts triggered by the federal budget sequestration in April 2013 grounded the Blue Angels. Harrell’s reaction? “Our season got canceled, but we were more concerned about our friends and coworkers in Afghanistan. It’s one thing to not have air shows; it’s a completely different thing to not have people who, due to budget cuts, are not as prepared as they should be going into combat.”

The squadron was flying again in 2014, after Defense Secretary Chuck Hagel ruled that outreach is crucial to the military’s mission.

Still on Harrell’s bucket list: Landing a jet on an aircraft carrier. “I’m holding out hope,” he says.