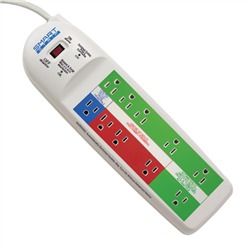 Energy savings can be easy with some savvy shopping for power strips, thermostats and residential lighting. These are the most common products you can use to reduce energy costs, and with a little research, choosing and using them correctly is easy, too, says Brian Sloboda, a program manager specializing in energy efficiency for the Cooperative Research Network.

Power Strips
Traditional power strips expand your number of outlets, but waste electricity by drawing power when they’re not in use. Smart power strips are a better choice because they are bigger, color coded, and reduce energy use by shutting down power to products that go into standby mode.

Most feature three outlet colors, each with a unique task. Blue controls heavily-used devices, like a TV. Anything plugged into a red outlets stays on—electricity to these is never cut off—making them perfect for satellite boxes or units needing constant power. The remaining outlets, usually neutral or green, are sensitive to current flowing through the blue one, so turning off the TV or computer also cuts power to them. Some smart power strips (about $20) even have occupancy sensors and timers that can determine when to cut power to various devices, and you can start to see a payback in about one year.

Programmable & Smart Thermostats
There are plenty of programmable thermostat brands and types to choose from, but you won’t find one that carries the EPA’s Energy Star® seal, as it was dropped from these products in 2009.

Programmable thermostats can save up to $180 a year on heating and cooling, notes ENERGYSTAR.gov, but many customers miss out on savings by failing to install them correctly. “Most people failed to use the programmable capabilities. They didn’t know how or didn’t want to,” Sloboda says. This led to poor EPA consumer surveys, so ratings dropped, and therefore the Energy Star seal for most of them.

Enter “smart” thermostats, which are intended as an easier alternative and come with motion sensors that detect and set a home’s temperature. Nest® is one brand. “Sensors will start to turn the thermostat up or down, depending on the season,” Sloboda says. In a few days, the unit will learn your schedule, automatically dialing the thermostat back when you’re not home.

The addition of phone and iPad apps are other smart features that make temperature control easy. But, he adds, “A thermostat will only save you money if you allow it to program.”

Interior Lighting
As of January 2014, a federal phase-out replaced incandescent lightbulbs with more energy efficient options. Currently, there are only three bulb choices—halogen-incandescents, CFLs and LEDs.

The LEDs are the equivalent of the most widely used 60-watt incandescent, and are more long-lasting and energy-efficient, but Sloboda warns that the brand you buy matters. “There is a whole lot of junk out there. You can buy name-brand LEDs for about $10 and more expensive ones from not-so-reputable companies.” He recommends sticking with long-time brands such as GE® and Sylvania®, but says “don’t overlook the lesser-known Cree® products.” A 60-watt (800 lumens) Cree costs about $10 at a big box store and is guaranteed to last 10 years or more.

Transitioning to LEDs is easy if you read the “lighting facts” on the box, which will help narrow your choice by temperature and color, which has nothing to do with wattage, and means you can choose bulbs with a “daylight” or “soft white” glow.

Smart devices are even now in the lightbulb aisle. Manufacturers like LG® and Philips® produce LEDs that can be controlled by your cell phone and change colors to suit your mood. “Today’s lighting is really starting to become part of a home’s entertainment system,” Sloboda says. Many smart lighting units come with software that allows you to create different modes (party, romantic, reading or TV watching) with the flip of a switch.

With the new lightbulb standards, the Department of Energy estimates consumers will save between $6 billion and $10 billion a year.