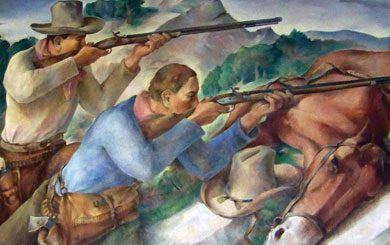 A busy post office isn’t where you’d expect to see wall murals and other artwork, but if the building was constructed during the 1930s and early ’40s, you may find works created by some of the best artists of that time. The art, and construction of the post offices where it resides, were part of Franklin D. Roosevelt’s promise when he accepted the Democratic nomination for president in 1932: “I pledge myself to a new deal for the American people. This is more than a political campaign. It is a call to arms.”

In 1933, a pilot program—the Public Works of Art Project—was created. Although it lasted only six months, the program employed thousands of artists and later became the Section of Fine Art within the Treasury Department. Artists were chosen through anonymous competitions. Some had national reputations, such as Jackson Pollock and Mark Rothko, and others were young unknowns receiving their first public exposure.

Well-known or novice, only the best artists were selected, and the art created had to reflect the town’s heritage. Artists visited communities for weeks on end, actively engaging citizens and resident historians in dialog to discover the history, traditions and stories that shaped their communities. To make this happen, the artist had to meet with the postmaster and local residents, the Post Office Department’s approval had to be obtained, and finally, plans were submitted for final approval by the Section of Fine Art. The project was meant to provide average Americans with a public outlet to view professional art, including many Michigan cities and towns.

In Clare, for example, the mural depicts a man walking in a field behind a team of plow horses while his wife hoes the broken earth nearby. Entitled “Extending the Frontier in Northwest Territory,” it was painted by Allan Thomas in 1938.

Thomas was born in Jackson, MI, and studied art in England, France and the United States. Jaroslav Brozik painted the mural in Howell. Born in Czechoslovakia, his family immigrated to Illinois when he was young, and he studied at the Art Institute of Chicago. His “Rural Delivery” mural depicts neighbors interacting—women talking, children playing, and a man reading a newspaper, with a lake and church in the background. At the mural’s center are three mailboxes and a man on horseback reading a picture postcard.

From 1934 to 1943, artists were chosen for the 46 post office projects in Michigan, and nationwide, over 1,300 murals and 300 sculptures were commissioned. One percent of the funds appropriated for a building project were set aside for these embellishments; the larger the project, the more money was budgeted for art. The standard New Deal Post Office carried a decorative allotment of $650 to $750, usually covering a space about 12 by 5 feet above the postmaster’s door.

There was controversy, of course. The argument was: how could the government spend money on artwork at a time when money was short? As Harry Hopkins, Roosevelt’s relief administrator, said in response to criticism of federal support for the arts, “[Artists] have got to eat just like other people.”

When touring the state to view New Deal artwork, however, you’ll find mostly positive images—the hard realities of American life during the Depression are not illustrated on post office walls or exteriors. Rather, the art offers a snapshot of history and hope.

Every piece of post office art has its own story: a window into the artistic tastes of the 1930s and ’40s, what subject matter residents felt best reflected their community, and the artists successes before and after this art was created.

A few pieces have disappeared over time, others need repair, and some of these masterpieces have been moved from their original locations.

By understanding this art’s value and importance to Michigan and American history, it can be saved and cared for in the manner it deserves, and its preservation ensured for future generations.

These treasures are located throughout our state. If you haven’t visited any of the Depression-era postal facilities, take the time—it’s everyone’s heritage.