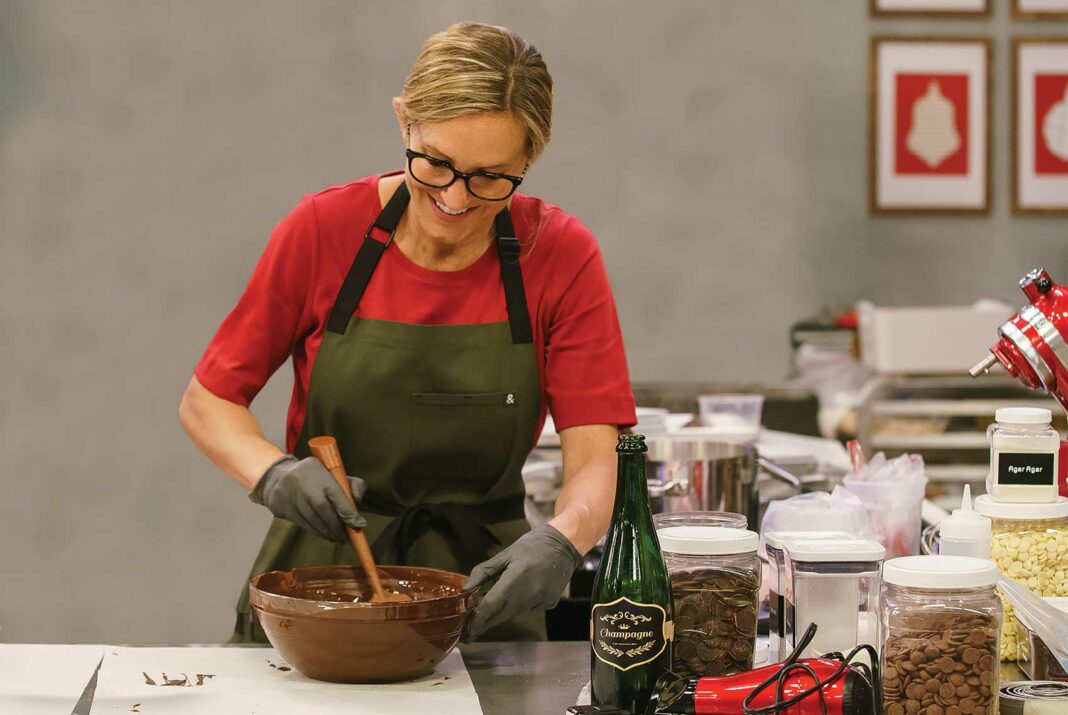 There is a scientific precision that goes into baking, with a combination of chemistry, biology, and physics at play. For those who decorate cakes, there’s another equally important part, which is the creativity, whimsy, and joy. Baker Beth Meyer shows there is a vital third ingredient to a successful creation, and that is the love and care she puts into each cake she bakes that truly turns each one into a work of heart.

Meyer, who recently found herself on the Food Network’s Holiday Baking Championship: Gingerbread Showdown, began her love of baking on a much smaller stage—her mother’s kitchen. While she would dutifully crack eggs or fry doughnuts, she marveled at how her mother would take sheet cakes and cut them into shapes to create delightful showstoppers for birthdays and special occasions.

“They weren’t exactly masterpieces,” said Meyer. “But the care my mother took to make these cakes the centerpiece of an event made them feel extra special.”

Following her mother’s lead, Meyer would lovingly make cakes for her own children’s parties. As she grew in her skill and creativity, her cakes quickly became the talk of the party. While living in Texas, Meyer threw her son’s birthday party with a Southwest theme, including both Texas Longhorn and cactus cakes covered in fondant, as well as specialty cookies decorated as snakes and other animals as party favors. Soon, Meyer was flooded with requests from other parents asking if she could make a cake for their upcoming celebrations. Even in the Texas heat, things snowballed.

“Then one day, my husband told me his company was sending us on an overseas assignment,” said Meyer. “In some ways, it made it difficult to even dream about baking for a living, but the cakes actually helped us connect with our new communities.”

While on an assignment in Africa, Meyer was definitely feeling disconnected. She brought one of her cakes to a party where the United States ambassador and his wife were in attendance. The ambassador’s wife reached out later and asked Meyer if she would create one for their upcoming anniversary. She ended up making several more in her time there.

“There’s nothing quite like the Secret Service coming to your door to pick up a cake,” said Meyer. “It also drove me to keep wanting to get better.”

Once the family returned stateside—first Texas and then Michigan, Meyer went back to her profession of teaching while remaining a student, as she would take cake decorating, sugar flower, or isomalt classes on weekends. It was at a cake show in Arkansas that she met MaryJo Dowling from Pittsburgh. MaryJo, or MJ, was equally enthusiastic about baking and decorating, and while the two lived nearly 400 miles apart, they maintained their friendship.

Just a couple years later, Dowling reached out to Meyer with an interesting proposition. Dowling had been selected to interview for a Food Network competition show. While COVID-19 had initially put it on hold, they were now moving forward—quickly. And Dowling needed a partner.

The whirlwind of meeting television producers over Zoom, being selected, and flying out to Tennessee to shoot the show on a soundstage would be enough to spin a person’s head. However, there was still baking left to do. Meyer and Dowling created a gorgeous holiday window vignette that impressed judges and eventually won them the $10,000 grand prize.

Meyer knew exactly what she wanted to do with her winnings—make her dream of a brick and mortar bakery come true. Meyer located a perfect spot in her hometown of Mattawan to open The Cake Boutique by Beth Meyer and got back to the work she loves—creating cakes that dazzle and elevate any celebration. One look at her gallery of cakes on her website and you see how special her gift is and how much care she puts into each one. So, when asked if she could possibly pick a favorite, it was surprising that she knew right away which one held the most meaning.

“Without a doubt, the heart cake,” said Meyer.

The cake, an anatomically accurate heart, was commissioned in October, and without asking many questions about the event, Meyer assumed it was for Halloween and asked how gory of a cake the client was looking for. The client said that just a plain heart would be fine.

So, when Meyer went to deliver the cake the day of the event, she was both surprised and touched to find out her cake was the centerpiece of a party to celebrate a young man’s one-year anniversary of his heart transplant. The young man hugged Meyer and left an impression that seems unlikely to fade.

“Cakes have always been about helping people celebrate their big moments in their lives, to make memories,” said Meyer. “That day reminded me life is worth celebrating. Every moment of it.”

If you’re looking to commission Meyer for one of her masterpieces, make sure to give yourself at least two weeks to order, and more if you’re smart. Meyer’s cakes are in high demand and just the thing to bring special occasions to the next level.