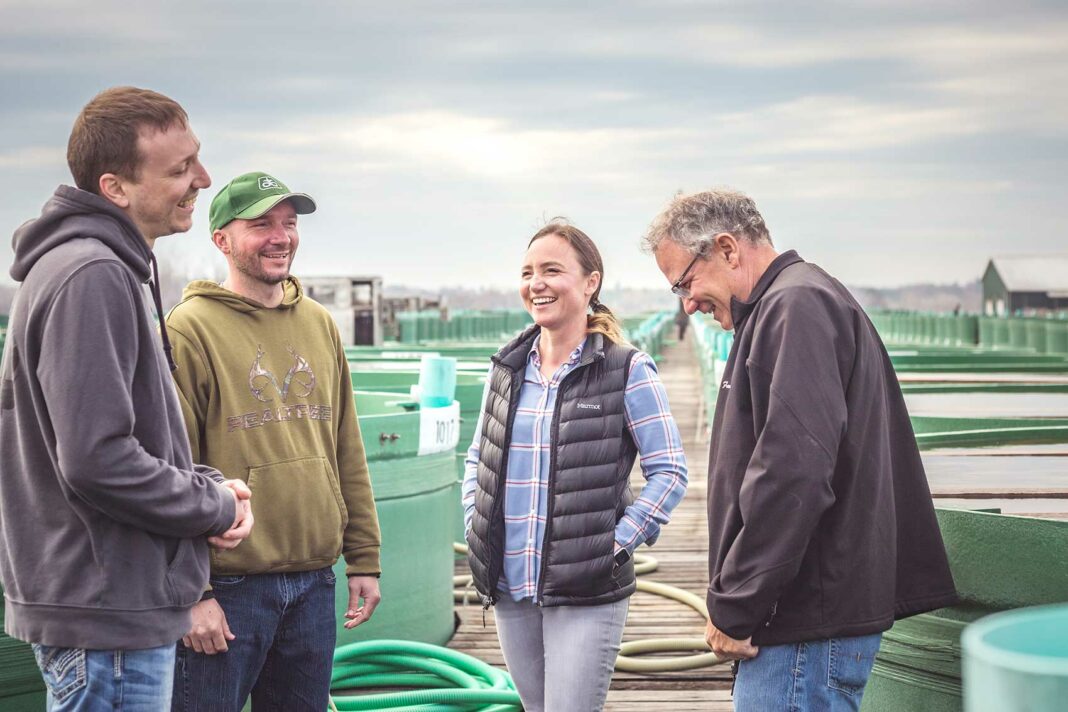 Michigan is one of the most diverse agricultural growers in the country, second only to California. So perhaps it shouldn’t be surprising that it’s the number one producer of cucumbers, specifically those grown for pickles. For such a tiny vegetable, pickles make for big business.

At Swanson Pickling Co. in Ravenna, Michigan, pickling goes back a long way, starting with John Wesley Swanson, who began by marketing and selling pickles grown in the state after World War II. Four generations later, the Swanson family grows, grades, and ferments pickles that find their way onto grocery shelves across the country.

“We grow almost 1,500 acres of pickling cucumbers, which yields about 200 bushels of pickles per acre,” said John Swanson, president of Swanson Pickle Co. “That’s just a third of what we brine, so the rest we’re getting from other farmers around the state.”

The company, which is a Great Lakes Energy Cooperative member, has more than 1,300 fiberglass tanks, each able to hold 905 bushels of cucumbers, with fermentation taking from four to six weeks. Pickles are then removed from tanks and shipped to client companies throughout the Midwest. These clients include big names as close as Holland, Michigan, where the Kraft Heinz Company uses these pickles as the base for many of its various products.

“We’re a company that knows how to pivot and grow based on what our customers want and need,” said John. “In the ‘60s, it was getting into farming. In the ‘80s, we needed to expand our tank yard. In 2000, it was sorting for customers who wanted to stop handling the raw product. You have to be nimble in any business.”

“Maybe it’s that there are a lot of family businesses in pickles, or the longstanding relationships we seem to have with one another. Or maybe it’s just a happy business. I mean, you can’t even say ‘pickle’ and not smile.”

John has seen his grandfather and father ride the ebb and flow of the pickle industry, and he’s worked with a lot of family over the years. The dynamics of working with his dad, brothers, and even cousins over the years has been a unique experience. Now, John watches as his three children take on their own roles in the family business.

The middle of John’s brood, Wes, manages that massive fiberglass tank yard with more than a thousand vessels to watch over. The youngest son, Matt, oversees the farming and growing operations that his own grandfather, Don, moved the business into. Finally, John’s daughter, Kate, who got her MBA from Spain’s IESE business school and used to work for Syngenta in Switzerland, functions as CFO, looking after the financials and sales.

“We’re honored to be a fourth-generation business, and luckily it’s never felt like a burden,” said John. “But even if the kids had decided not to take over the business, I wouldn’t have been upset. I’m still proud of what we’ve all built together.”

John says he doesn’t carry the burden of the business, the struggles of unknown factors in farming, or even the weight that could be felt in keeping the family business going, as he speaks of the work the family does.

Warmth and friendliness exudes from the present patriarch, and he notes that it feels small and tight-knit like a family within the pickle industry. He mentions moments of discovering “your grandpa knew my grandpa.”

“Maybe it’s that there are a lot of family businesses in pickles, or the longstanding relationships we seem to have with one another,” said John. “Or maybe it’s just a happy business. I mean, you can’t even say ‘pickle’ and not smile.”