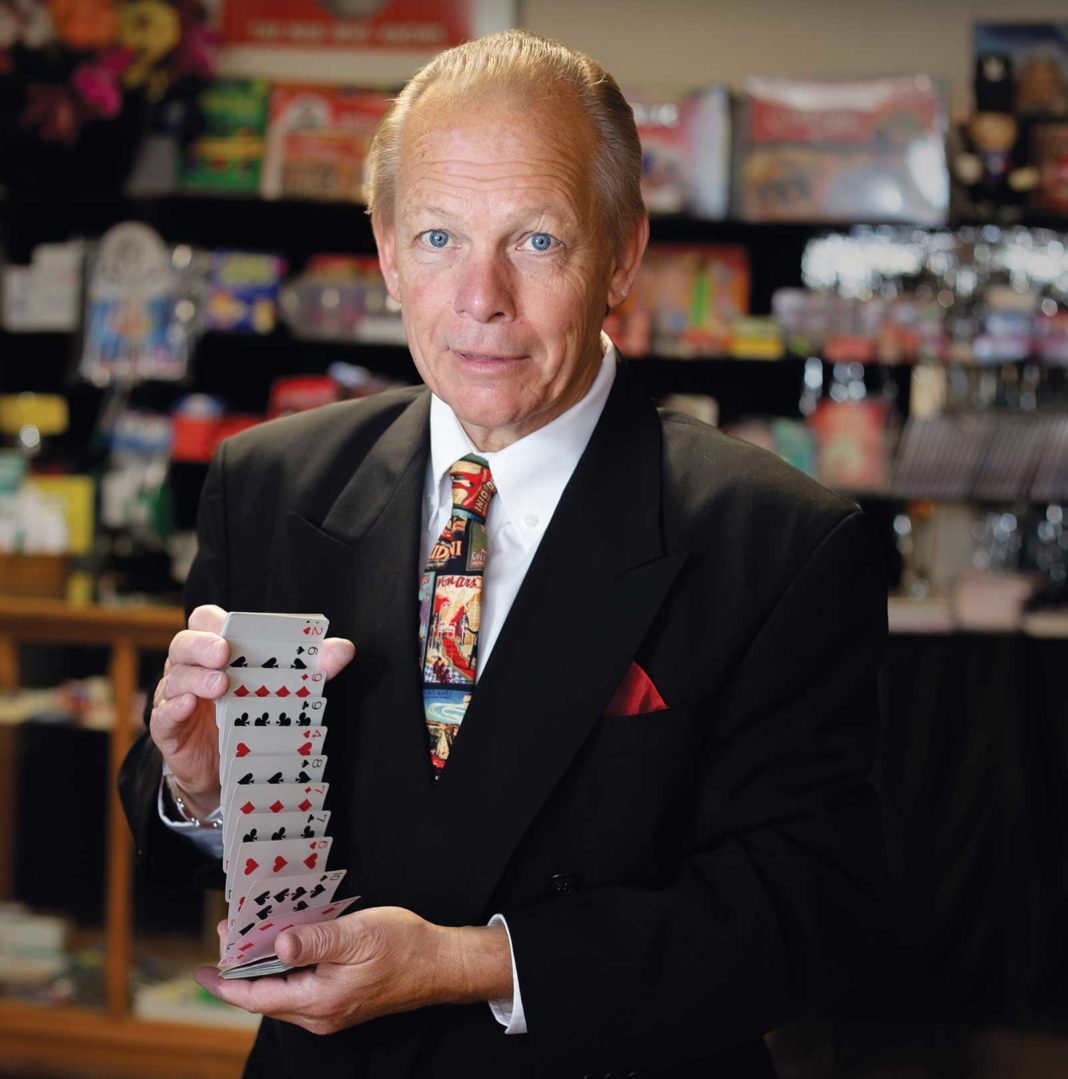 Many small towns in rural Michigan are quaintly magical. But in the tiny hamlet of Colon (population 1,100-ish), magical is more than an adjective, it’s a way of life.

The history of Colon’s relationship with magic goes back to the Roaring ‘20s, when famed magician Harry Blackstone Sr. (who was on par with Houdini and Thurston) did as many Chicago entertainers did in the sweltering city summers—escaped to cooler climates, like Michigan’s lake communities.

Blackstone’s wife was the one who happened upon the 220-acre plot of land that they would eventually call home. The entire Blackstone troupe traveled to the other side of Lake Michigan and settled on what the magician called Blackstone Island (though not technically an island) on Sturgeon Lake to work up the coming year’s act.

“It was in the late ‘20s that Blackstone met an Australian magician, Percy Abbott, and invited him to visit Colon,” recalls FAB Magic Company owner Rick Fisher. “The two built the Blackstone Magic Co. Eventually, Abbott met a local girl, got married, and stayed behind and tended to the business.”

The partnership was beset with drama equal to their own acts, and the two magicians parted ways as business partners, though both remained in Colon—rumored never to have spoken to one another again.

Abbott renamed the magic shop Abbott Magic Novelty Co. in 1933 and the draw kept magicians, and those with magic addictions, coming to explore its wonders, with many of them staying on themselves.

Lester Lake, also known as The Great Marvello, was one of them. He was known for his wild escapes, including one from chains while engulfed in flames in the middle of the road in downtown Colon. With so many folks visiting from the industry and many of them sticking around, Lake coined Colon “The Magic Capital of the World.” It was in 1991 that the small town was finally recognized officially by former U.S. Sen. Carl Levin.

Decades later, it was Fisher’s turn to fall in love with the magic of Colon.

“My family owned a lake cottage in Columbus City, and we visited Abbott’s when I was 7,” recalls Fisher. “I was hooked.”

Each summer, Fisher would save money from mowing lawns, beg for a ride to the magic shop, and buy a new trick. His mother was given some leftover fabric and sewed the first tuxedo for her precocious son.

The childhood hobby became a lifelong obsession. While always keeping magic near and performing on the road, Fisher also lived your average life as a sales representative, father of four, and loving husband. However, after a hospital stay in 2002 due to a blocked artery, Fisher found himself with time to think and came to the realization that the future isn’t promised. He told his wife Cheryl he wanted to start a magic shop in Colon.

“I told Cheryl we should do it. Buy a shop. Luckily, she agreed,” Fisher said. “I mean, it’s never been easy, but we’ve never looked back.”

FAB Magic Shop and Abbott’s Magic Co., as well as Sterlini Magic Mfg. and Theater, are all still in business and participate in an annual magic festival the first week of August each year. Even COVID-19 was no match for the ultimate illusion of normalcy, as a socially-distanced flea market with booths and shows still made its way to Colon’s streets. Over 150 people turned out, not sure if the magic would show up at all. But the community is always up for the next trick.

That’s what Fisher loves about his adopted hometown. Colon is as quirky as it is quaint, with banners along Main Street calling it the “Magic Capital of the World” and the high school giving its mascot—a rabbit—the name of “Hare E. Blackstone.” There’s also the Magic Walk of Fame along East State Street and over 35 magicians buried in the town’s cemetery. The town’s history is rooted in magic.

“Magic has put Colon on the map,” said Fisher. “You can talk to almost anyone in the magic industry from anywhere in the world and they’ve heard of Colon.”

Fisher has high hopes to keep the magic alive in the future too, even as the industry itself faces difficult times. One of the largest magic manufacturers out of California actually closed its doors recently. A looming sadness that Fisher hopes the Magic Capital of the World can avoid.

“I’m lucky to see the faces of the families and especially the youngsters as they look around the shop. There’s so much possibility. So much excitement,” said Fisher. “I want to keep that excitement going for as long as I’m able. Because if we don’t take care of the magic—it really could disappear.”