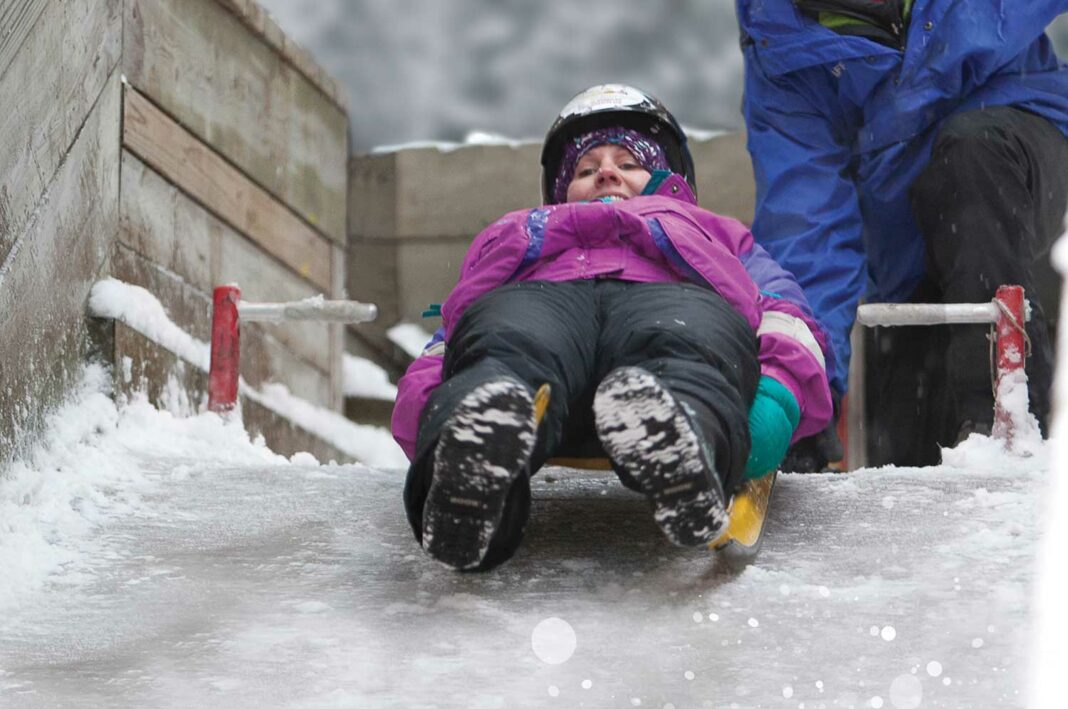 While the next Winter Olympics aren’t scheduled until 2022, the spirit of winter athletes is very much alive and active—especially at the Muskegon Luge Adventure Sports Park that calls Muskegon State Park its home.

On the Olympics, you see luge sliders (sliders, not lugers or sledders) going down icy tracks at up to 90 miles per hour, with nothing but a small sled just a few inches off the ground between them and the supersonic slope. There are just a few luge tracks in the United States, the most notable in Salt Lake City, Utah, and Lake Placid, New York, where most serious lugers train. There is a natural luge track in Negaunee, Michigan, that hosts the U.P. Luge Club. But nestled on the side of the sand dunes of Lake Michigan is a luge track that allows average folks the opportunity to fly.

“We’re so lucky to have this amazing location to call home,” said Bill Bailey, lodge manager of Muskegon Luge Adventure Sports Park. “None of this would even be possible without our community and volunteers who have supported and helped maintain the track and the program over the years. This is a labor of love for all of us.”

When the luge track was first being built in 1984, two young men were afraid their little local sledding hill would no longer be available. Builders on-site invited the two boys to help with some of the work, getting hands-on experience in what it takes to make a luge track. Both of those young men went on to become involved in competitive luge. Nearly 40 years later, one, Jim Rudicil, is now Muskegon Luge Adventure Sports Park’s executive director. The second, Mark Grimmette, went on to compete in five Winter Olympics games, winning silver and bronze medals. Grimmette now runs the competitive luge program at the Sports Park.

“So many great sliders have gotten their start here at the Park,” said Bailey. “Luge is the kind of sport that becomes a part of you. Jim and Mark have been a part of the sport in one way or another since they first saw the track being built.”

While luge definitely attracts its share of thrill-seekers, it’s accessible to anyone who wants to experience the rush of flying down a hill at speeds of up to 30 mph. Bailey and the team have made sure that those with the desire can experience luge—developing sleds to accommodate different physical impediments and rigging a snowmobile to get those who can’t access the stairs to the top of the hill. The Muskegon Luge Adventure Sports Park also offers an opportunity for every sixth-grader in the Muskegon school system to try out luge.

“Luge might seem like a real niche sport, but exposing kids like those in our area to it is always awesome to see,” said Bailey. “Some kids really take to it and stick with it by joining our competitive programs.”

While luge is a huge draw for the Park, those who enjoy a slightly different pace can find ski runs and a two-acre rink for hockey, figure skating, or just family fun, as well as skating trails. The Muskegon Luge Adventure Sports Park recently installed a 1,400-foot zip line, which got a soft launch this past fall. It also has wheel luge, archery, and paddle sports in warmer months. These are just a few ways that the Park is looking to make this gorgeous outdoor venue a draw year-round.

“We’re outdoors lovers,” said Bailey. “We want to share that with as many people as we can. Enjoying these resources and taking care of them is part of the stewardship our staff and our visitors want to be a part of to ensure they can be experienced by future generations.”

Check out DUNEiversity—team bonding experiences facilitated by the Park. There are half- or full-day sessions for corporations, sports teams, churches or scouting troops. For more information, visit msports.org/team-building/.