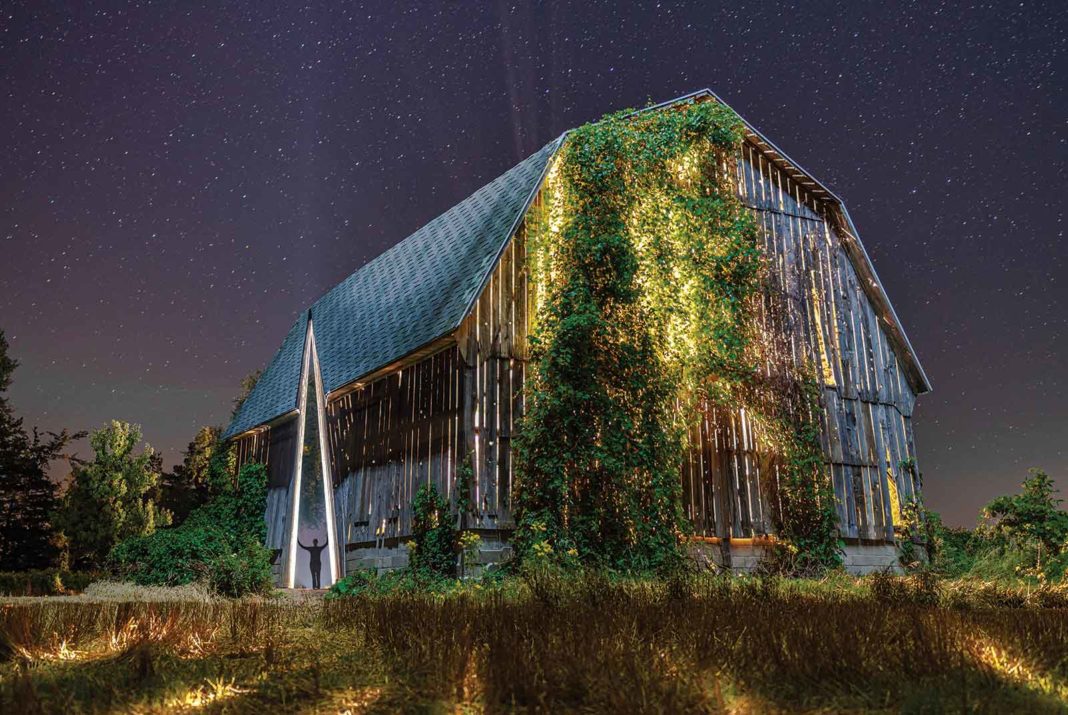 An art scene is emerging in the small, waterfront town of Port Austin in Lower Michigan’s Thumb area. And it’s emerging in a way that is totally unexpected and larger than life.

While driving the meandering roads of the Thumb, you can’t help but notice the many barns peppering the landscape. Most of them look like relics from a bygone era, which in some ways they are.

Jim Boyle, a former Port Austin resident, now works for a foundation in the Detroit area and has been deeply involved in the city’s art scene. His parents still live in the Thumb, and while visiting them years ago, he noticed the turn-of-the-century barns starting to lose in the undeclared war with nature. As the traditional family farm saw a decline, the story of struggle and hanging on by a thread, or rather a beam, was all too metaphoric in the barns. Once majestic, utilitarian structures, these barns were beginning to look all too often like abandoned dreams or livelihoods.

“You can’t help but make the connection to these beautiful barns and how just over a hundred miles away, Detroit has seen similar structural loss,” said Boyle.

As a member of the arts community, Boyle had intimate knowledge of how art has the ability to transform what might otherwise be forgotten. After 10 years with the Detroit Institute of Art and as the co-founder of a gallery—Public Pool—Boyle understood how art could help build up a community.

It started with a lofty goal—artistically modify 10 barns in the Port Austin area in 10 years. Boyle reached out to the art community in Detroit, and the farm and local community in Port Austin. He made the connections and hoped to watch the magic happen.

“Like any large installation project, it is a million moving pieces and gets away from you fast,” said Boyle.

The project, which started seven years ago, has artfully transformed three barns in Port Austin. While the number of projects shrunk, the scope and scale of these installations have had a big impact both in the community and on the visual landscape. Boyle urges those both local in Port Austin and beyond to take the drive and prepare to marvel.

Ultimately, Boyle notes that there is no shortage in interest from Detroit artists. With three projects to reference, Boyle hopes that the community organizers can now point to these installations to encourage additional involvement, fundraising, and more barn projects.

It’s a lofty mission with big dreams for future growth. However—for a project of this scope—“lofty” seems just about the perfect size.