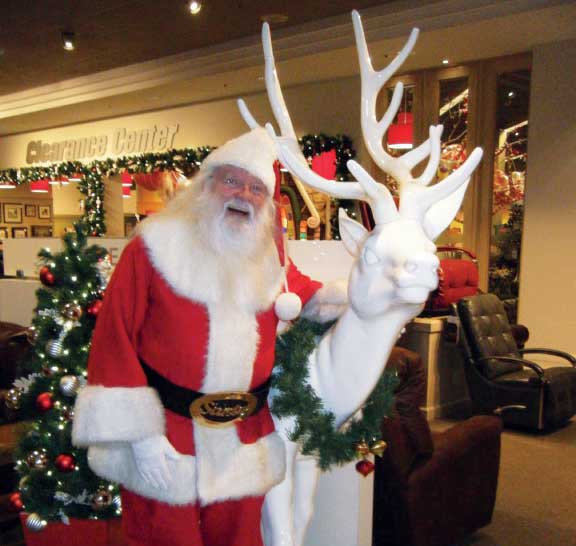 Holidays are a great time for tradition.

A favorite in our family was taking the kids to see Santa. With so many children all over the world waiting expectantly to meet Mr. Claus, he welcomes a little seasonal assistance! Enter A. Michael Deller, a graduate of the World Famous Santa Claus School in Midland, MI, and Santa’s helper since 2002.

How does one decide to enroll in Santa School? Years ago, Deller wanted to prove to his son that his beard would grow completely white, not salt and pepper. And it did! But even with a beard as white as snow drifting around Santa’s workshop, portraying Santa was not on Deller’s radar until he visited Livonia City Hall. After a volunteer backed out of the holiday parade, a staffer at city hall recognized Deller (and his beard). Frantic, she asked him to ride in the parade and with a “Ho! Ho! Ho!” Deller was hooked!

Knowing peoples’ expectations and how important his seasonal duties are, Deller strives to “be authentic, true to tradition.” The golden rule? “Don’t promise anything! Even if the parent is nodding yes. I tell children I will do my best but it will be a surprise.”

What about answers to the BIG questions? “I have a magic key. Elves are always watching who’s been naughty or nice. There is no such thing as a bad cookie. And yes, the reindeer like treats too!”

Genetics have given Deller “the Santa build,” so a gig impersonating Saint Nick was probably inevitable. With a jolly chuckle, Deller explained that the beard stays year-round because “it’s too itchy to grow it back.” So I had to ask, do kids spot this Santa when he’s off duty? Of course! And this Santa is prepared. A mother approached him one day and said her children thought he was indeed Mr. Claus! “You will grow up to be good detectives!” Deller told the kids, and handed each a card with his picture on one side and “I met Santa Claus” on the other.

But his favorite story involved his own grandchildren, Kate and Ryan. When they arrived at a function the two ran up and said, “Hi Santa!”…then Kate hugged him and whispered…”Don’t worry grandpa, I won’t blow your cover!”

Merry Christmas to all and to all a good night!

A. Michael Deller is retired and
a member of Presque Isle Electric & Gas Co-op.