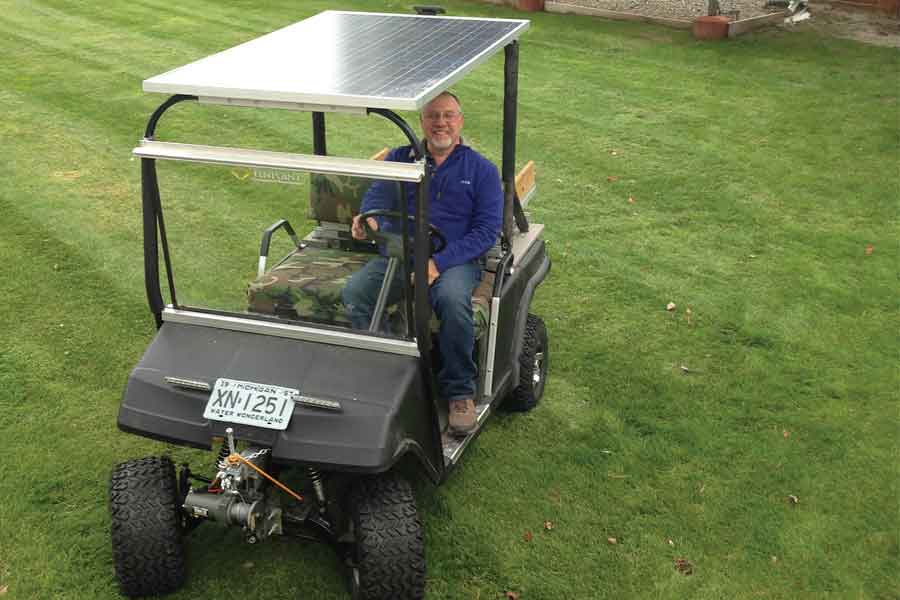 What happens when you combine a master electrician, educator, licensed contractor and self-described tinkerer? You get Mike Schmerl, an instructor at Northwestern Michigan College and owner of Panoramic Electricity.

Since starting his electrical company 23 years ago, Mike has made the study of electricity something of a hobby, fueling the fiddler within while inspiring a new generation of electricians. In fact, one of Mike’s electrical apprenticeship classes was awarded a grant to study solar power. With his home now covered in solar panels, wired with various switches and batteries, Mike uses his personal experiences with this alternative energy source in the classroom. And his students seem to be warming to the idea.

“Solar has amazing benefits,” Mike said. “We are much further along in its day-to-day use than people even know.” An electric car, for instance, can run approximately 238 miles between charges. Mike says, “that pretty much covers the average day driving for most of us.”

But what happens when you combine an electric car with solar power? Mike discovered you can have an affordable and comfortable means of transportation as proven by the solar powered golf cart he built! And while he admits some working vehicles might still need gas or diesel fuel to operate, Mike remains confident that soon we’ll be picking up groceries in electric powered cars.

Some argue that Michigan’s often cloudy, overcast skies make solar impractical. Mike insists that’s not true. He cites Germany, a country sharing its latitude with Michigan, as a global leader in solar energy. While acknowledging that solar might not be the total solution to man’s energy needs, Mike says sun power complements other energy forms, pointing out that “even oil companies see the value of finding alternative energy sources so as to extend their production life.”

Describing solar power as the perfect marriage of old and new technology, Mike understands many of us will never be truly off the grid. “We will always need bigger generating capacity to power an ever-growing infrastructure,” Mike explained. “If you want a hot tub or larger appliances, you will always need the power grid.”