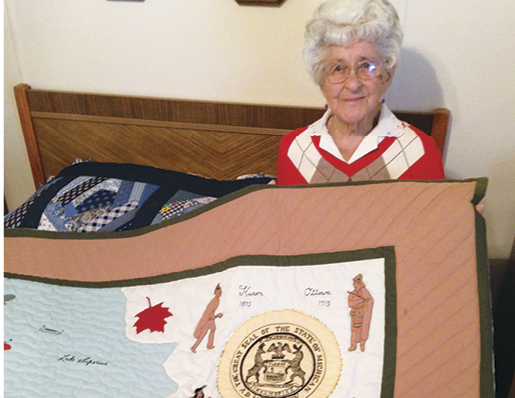 Eleanor Howard’s story began when she was eight years old and asked her mother how to quilt. As a team, they pieced together Eleanor’s first quilt and 87 years later, she still has it. “I’ve used that quilt on all my children’s beds. I pert near wore it out!”

Speaking of children, Eleanor has five. And 15 grandchildren, along with 20 great-grandchildren. Each one has a quilt lovingly stitched by grandma. In addition, Eleanor donates many of her quilts to charity. How many has she made? “Oh, too many to count!” Of the dozens of quilts assembled in her 95 years, one in particular stands out.

She made the quilt for her son, Albert, carefully patching each piece over two years. The result? A quilt depicting the state of Michigan, including all 83 counties, each painstakingly cut to its exact shape and featuring the product or service it’s known for. Using appliques, stenciling, embroidery and hand painting, Eleanor had no pattern.

She bought the biggest map she could find and went to work on figuring scale. The detail of Eleanor’s Michigan quilt catches everyone’s eye and has won multiple medals and ribbons.