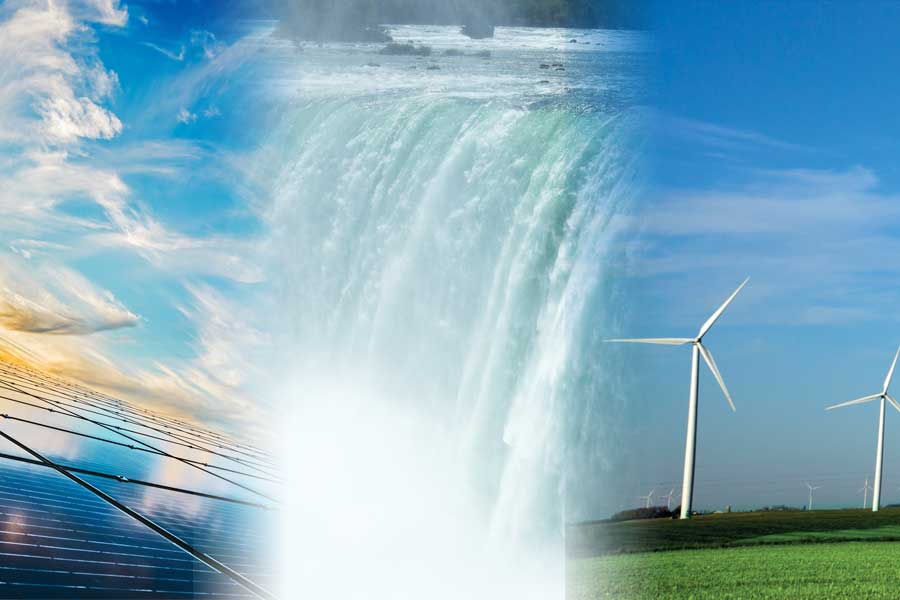 Michiganders know these elements can make for a great day at the beach. Michigan’s electric cooperatives also know these raw energy sources can be a great way to power your home.

From solar to wind to hydroelectric (hydro) power, Michigan’s electric cooperatives are the state’s undeniable leaders in renewable energy.

Collectively, Michigan’s nine electric cooperatives will receive more than 20 percent of their energy from renewable resources in 2017. Meanwhile, the statewide average for other utilities is closer to the Renewable Portfolio Standard (RPS) requirement of 10 percent.

Michigan’s cooperatives have been ahead of the curve on renewable energy for more than a decade.

In 2006, Wolverine Power Cooperative* partnered with John Deere Renewables to develop Michigan’s first commercial scale wind farm in Huron County. The wind farm was fully operational in 2007 with an output of 50 megawatts. The following year, Michigan adopted the RPS which mandated a 10 percent supply of renewable energy be utilized by electric providers by 2015.

After Michigan’s first wind farm, progress continued with the state’s very first community solar project at Cherryland Electric Cooperative in 2013. Another community solar project was built by HomeWorks Tri-County Electric Cooperative in 2014. Community solar offers an affordable, convenient way for members to use renewable energy as a power source. A solar panel subscription entitles members to a share of energy produced on a utility-scale community solar array. Participants receive solar credits on their utility bill. It’s a great way to remove up-front costs and installation barriers of solar, making it available to the wider membership.

Cloverland Electric Cooperative operates one of the largest hydropower facilities in Michigan. Located along the St. Marys River in Sault Ste. Marie, the hydro plant produces one-fifth of the power needs of the eastern Upper Peninsula.

This fall, a partnership that includes several of Michigan’s electric cooperatives will begin construction on a large solar project located in Missaukee County, between Cadillac and Lake City. This large-scale array will begin generating electricity using the sun starting in January 2017. The project is still in the early stages, and more information will appear in future issues of Michigan Country Lines as it develops. Additionally, members can sign-up to receive project updates at spartansolar.com.

So why do Michigan’s electric co-ops continue to lead the way in renewable energy?

“We listen to our members and are able to capitalize quickly on renewable energy opportunities,” said Craig Borr, CEO/president of the Michigan Electric Cooperative Association (MECA). MECA is the service organization representing electric cooperatives in Michigan.

Clean, renewable energy generation is where the future of energy is headed.

And for Michigan co-ops, that future looks pretty bright.