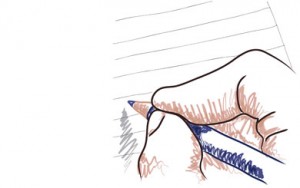 I recently wrote a note in a card. It was a simple note in a simple card for my wife Barbara’s birthday. The card was bought years ago, but never given for one reason or another. (I have cards, bought for immediate use, stashed away for happy and sad occasions that haven’t seen a stamp yet. I’m not a big fan of cards, paper or digital, which is a different animal and doesn’t deserve to be called a card. I don’t like shopping for cards, and the novelty of digital cards wore off after about two.)

But this is not about the card, it’s about the note and how awful it looked after I finished writing it. “Writing” isn’t the right word, because I couldn’t read the note after I finished. I even butchered her name. At first glance, it looked like “Bondt,” which isn’t really close to “Barb.”

I used to laugh-off my handwriting. Now it embarrasses me. I have to warm up just to sign my name; otherwise, my hand muscles won’t follow my brain signals in any recognizable pattern. My signature is worse than any doctor’s. At least a doctor mangles his or her name in the same way consistently. Their signature is a mark that the pharmacist knows on sight; it doesn’t matter that the name isn’t readable.

Some say our signature is important because it’s our legal mark, without which we couldn’t enter into contracts, cash checks or approve credit card payments. I think those digital signature pads in grocery and other stores must have some other way of verifying who I am because they certainly can’t tell by my signature. It’s different every time. Who can write on those things, anyway?

It wasn’t always so. I once had decent handwriting. It flowed, one letter to the next, in an unbroken line, with recognizable letters and little upturns at the ends. This skill was taught, almost religiously, in grade school, following the precepts of popular programs, such as the “Palmer Method,” a rigorous set of rules for hand and arm control of a pen that swooped and swirled on lined paper until pages and pages were filled with the same whirly strokes. It was pretty, but not many of us write like that anymore.

My mother’s writing is beautiful, and so is Barbara’s Aunt Jeanette’s. They spent a lot of time practicing in the 1930s. Since then, the teaching of handwriting skills has steadily disappeared from many school curriculums.

The likely cause of all this is that we don’t have to write much anymore. Now we have mechanical messaging, with keyboards and texting, even voice recognition software that takes dictation. It’s easier to use a phone than a pen. It’s quicker to text than write. We can reach more friends on Facebook than we can with a card. No wonder the Post Office is in trouble—but that’s another issue.

The point is, handwriting—that is, “cursive” writing—seems doomed. Once our kids learn how to print, they get little instruction in cursive penmanship before they move on to computers. It’s not out of the curriculum yet, but penmanship as a skill is in sharp decline. As with most states, penmanship is still required to be taught in Michigan schools, but it is not included in national curriculum guidelines set for 2014.

Before you bemoan the loss, consider that handwriting for the masses is a relatively recent phenomenon. Its use grew in 17th century Britain along with the Industrial Revolution and the growth of business, which sought to standardize writing to make it faster and more legible. Our Declaration of Independence, rewritten in impeccable longhand by a professional writer, from Thomas Jefferson’s original cursive, is a prime example of connected writing at its best.

Austin Palmer introduced his method in 1894 to compete with the typewriter. At its peak, the Palmer Method was promoted by certified instructors who emphasized regimentation. They suggested that the Method would improve discipline and character, change lefties to right-handers, and even reform delinquents. In its early years, advanced penmanship was seen as the way to a job, even after 8th grade.

The schools doing away with cursive instruction say time is better spent on other skills­ – those needed in today’s job market. But cursive instruction has its defenders, too. They say penmanship practice improves kids’ motor skills, eye-hand coordination, and artistic aptitude. Plus, they ask, if kids are not taught cursive, how will they read historical documents like the Declaration of Independence?

Barbara’s Aunt Jeanette sends us handwritten notes that are models of penmanship. The letters flow into each other like waving fields of grain. They’re easy to read and look good on the page. My writing, however, looks like I’m a tortured soul. Our sons, who had cursive instruction, are also converts to the dark side.

It turns out, though, that we’re not alone. Studies have shown that my tortured script is commonplace. In fact, most people abandon the strict cursive writing they learned in school in favor of a more casual combination of cursive and block print that has the advantage of being a more natural, and faster, way to write.

Still, it would be nice if you could read it.