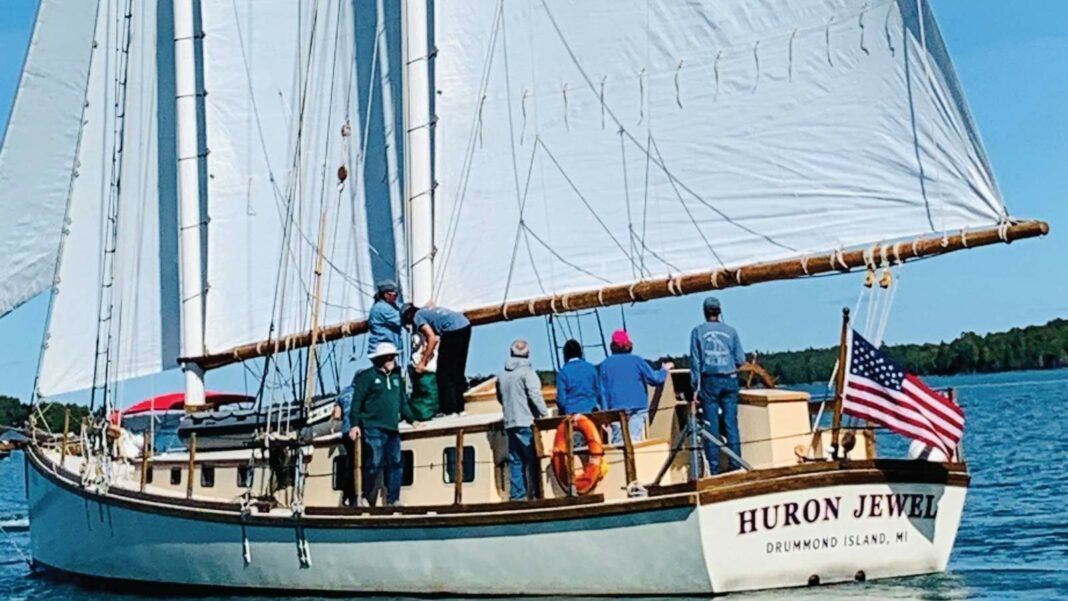 For anyone who has considered moving to an island to pursue a passion for sailing, take inspiration from Hugh and Julie Covert. After making a “bucket list” on New Year’s Eve in 2010 and pondering it for a couple of years, the couple transformed their dreams into reality.

Julie met Hugh in Baltimore in 2009 and describes the encounter as “essentially love at first sight.”  Shortly thereafter, she learned to love sailing as much as he did. Hugh spent 20 years captaining tall ships on both the East and West Coasts, through the St. Lawrence Seaway to the Bahamas. When skippering a schooner in Traverse City, he searched for property to support his dream of having a place where he could moor a sailboat in his backyard. He had purchased a property in 2003 and built a house on Shelter Island, a small island just off Drummond Island.

In 2010, they moved to Shelter Island and began to fulfill their dream of building their own schooner. Great timing and happenstance supported their dream when Julie learned the local paper, the Drummond Island Digest, was for sale. Purchasing the paper in 2014 aligned with her writing and photography interests, plus the paper would serve as a tool for communicating progress on the schooner’s construction.

“I kept hoping someone would bring a tall ship to Drummond Island,” says Hugh. “Then I decided it could be me.”

By the time the couple moved to Shelter Island, Hugh had built seven boats. Sailing since age 4, Hugh had both sailing and engineering in his genes. The Coverts knew the logistics of getting materials and volunteers to Shelter Island would be challenging, whereas Drummond Island would allow friends and neighbors to view progress as they constructed the schooner. They purchased property on Drummond Island, then built a structure that included a 30-by-72-foot workshop and an insulated room to keep epoxy glue and paint warm, plus power to run a chop saw and drills.

For two and a half years, the couple worked seven days a week to construct their own schooner. They were assisted by more than 50 volunteers (both residents and seasonal visitors) who swept floors, painted the hull, or donated trees for the project. Julie reported progress in a monthly blog.

Constructed of 18 types of wood and epoxy, the 78-foot Schooner Huron Jewel yields sleeping quarters for Captain Hugh, First Mate Julie, two deckhands, and six passengers. Its name reflects its birthplace and Hugh and Julie’s initials. Cedar trees harvested from Drummond Island formed the gaff and boom. The Schooner Huron Jewel was christened with 15-year-old rum amid a crowd of island residents in 2018, then set sail for the start of many adventures as the Drummond Island Tall Ship Company.

The location for Drummond Island Tall Ships offers an ideal vantage point for all the excursions they offer aboard the Huron Jewel. The island’s surroundings are a labyrinth of channels, inlets, and harbors.

Each season, Hugh and Julie also provide the opportunity for two deckhands to learn to sail the waters surrounding Drummond Island and Canada’s North Channel. To train deckhands trying to gain experience to work on bigger schooners as Hugh did, they’ll take deckhands with no experience but enthusiasm, curiosity, and willingness to learn.

Hugh believes that writing down dreams is essential versus just talking about them. “You have to actually do it. You have to make it happen and there’s no time better than the present,” he says.

After the pandemic gave them time to reflect on what is important, Hugh and Julie were even more motivated to encourage others to follow their dreams. They set out on a nine month voyage this past August to sail from their homeport through the Great Lakes to the St. Lawrence Seaway, then south along the eastern seaboard. They plan to participate in the Great Chesapeake Bay Schooner Race and Annapolis Sailboat Show, and most importantly, at each port of call, they will encourage people to live their dreams. They’ll continue south for the winter spreading their message and return to Drummond Island in Spring 2023. On their “dream inspiration tour” of over 8,000 nautical miles, their mission is to share their story with thousands of people to inspire others to live their dreams.

Sailing with the Coverts and crew is a relaxing yet adventurous experience. It’s also as interactive as you wish. Passengers can assist with raising and lowering sails and even taking the wheel under Captain Hugh’s watchful eye. The Schooner Huron Jewel is allowing the Coverts to live out their motto, “sailing the dream,” while sharing their experience with passengers with great delight.

For the blog, more photos, and schedule visit: ditallship.com