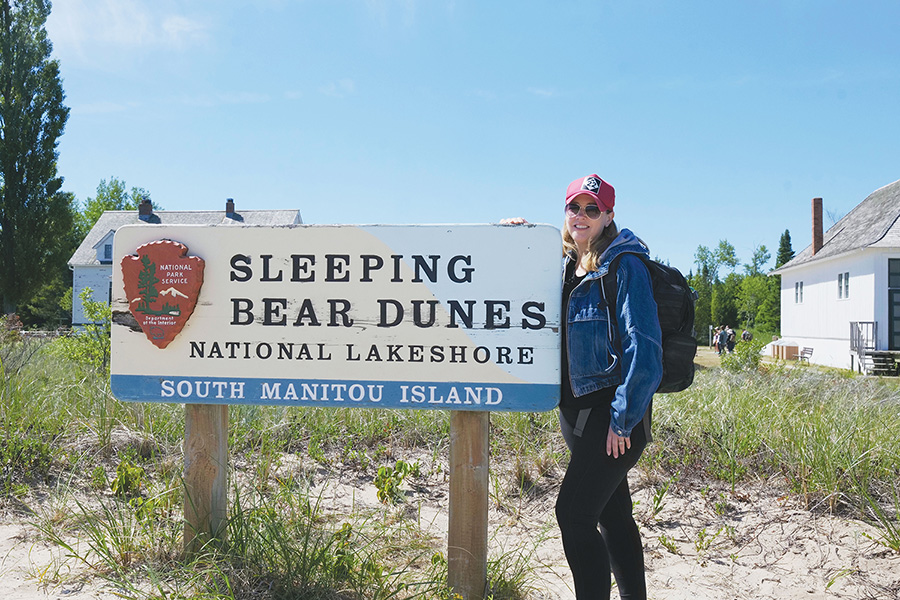 I think everyone can relate to wanting to “get away from it all.” The chance to disconnect from our modern lives and reconnect with nature, and ourselves, is not just appealing…it’s necessary. That’s what I kept thinking about as I hiked through the majestic beauty of South Manitou Island, just 16 miles off the coast of Northwest Michigan and yet another world away from where I’d woken up that morning.

Fueling Up
The day began in downtown Leland at Leelanau Coffee Roasting Co.’s Breakfast Bistro, where I enjoyed a delicious omelette and steaming mug of Sumatra dark roast. Afterwards, a quick stop across the street to the Leland Mercantile for supplies, and then down to the waterfront to Manitou Island Transit—our ride to South Manitou.

Pro Tip: Be sure to bring snacks, lunch, and water with you to the island!

The History
Settled in the 1830s by William Burton, the island was first seen as another resource for timber, but logging operations eventually fizzled because of difficulty getting there. A small village formed, and at one point many thought South Manitou might become a vacation destination, but, again, the travel difficulty ended those plans.

Arrival
When our ferry docked and we set foot on South Manitou, the first thing I noticed was the beauty. Lake Michigan is remarkable from any vantage point, but being surrounded by her blue waters was magnificent. The second thing I noticed was how incredibly quiet the island is, immersing myself in the natural sounds of rustling wind in the trees and light waves almost tiptoeing to meet the shore.

Exploring
Manitou Island Transit offered a tour, and our first stop was a “farmhouse” with the most amazing waterfront view I’ve ever seen. Built by the Burton Family in the late 1800s, this idyllic structure—featuring eight rooms, each with its own sink—was purchased in the early 1900s by those who wanted to push the island resort transformation. As previously noted, that never came to be. Now, the boarded-up house is home only to a large bat population.

In the southwest corner of the island lies a valley of cedars that time forgot, twice the typical size. Being underneath these gigantic trees reminds me of the Japanese concept of “forest bathing,” or “taking in the forest atmosphere.” No soap and water required—the practice encourages you to spend time in nature, citing all the restorative effects that time in the woods has on a person.

The island has seen its fair share of tragedy and is riddled with heartbreaking tales of slaughtered native tribes, sailors dead from cholera thrown into mass graves, and lighthouse keepers losing children to the harsh waves of the Manitou Passage. And, of course, the over 50 shipwrecks surrounding both North and South Manitou. None are more visually striking than the Francisco Morazon, located off the southern shore. She passed over another shipwreck and ran aground in 1960. Seven years later, Michigan Attorney General Frank Kelley filed a lawsuit to have the wreck removed, citing rotting cargo and leaking fuel oil as a health hazard. The next day, the Francisco Morazon caught fire, and all its contents were consumed in flames. The shipwreck is now property of the state.

Saying Goodbye
As we sat on the dock, awaiting the ferry’s return, I couldn’t help but already miss the island I had yet to leave. It is a place to slow down, reflect, and appreciate the strident majesty of Lake Michigan. Plans to return to camp are already in the books.