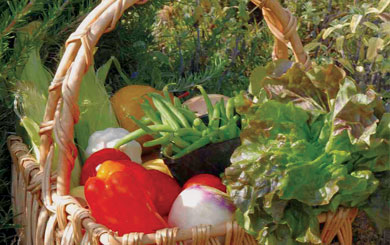 Some vegetables, herbs and flowers protect and feed each other when grown side-by-side.

Have you ever noticed how one vegetable plant can fail in one location yet thrive in another? Given the same soil, water and light, the two plants don’t seem to grow the same. The difference may be a plant that’s growing next door.

This plant compatibility is the foundation of a gardening technique called “companion planting.” Basically, it’s a partnership formed by growing plants next to each other that are different but also enhance each other’s ability to grow and increase productivity in five ways.

Certain plant allies improve the flavor of neighboring vegetables by providing nutrients. For example, comfrey (an important herb in organic gardening, used as a fertilizer and herbal medicine), buckwheat and other deep-root plants can mine nutrients by bringing them to the surface and making them more available to other plants. Various cover crops, such as alfalfa, clover and vetch (a scrambling, herbaceous plant of the pea family that is used as silage or fodder) also nourish neighboring plants with essential nutrients and trace minerals, including nitrogen, phosphorus, potassium, calcium, magnesium, and iron.

Other plants—such as peas, beans, lupines and clover—can transport nitrogen from the air we breathe down into their roots, where bacteria converts it into a friendly form for their neighbors. In this case, corn, peas and other nitrogen-hungry plants make great companions, as they will benefit from the “nitrogen-fixing ability” of these legume-type plants.

Other plants can improve their neighbors’ health through a network of defensive chemicals that help ward off pests and disease. Marigolds are a classic example, as both the French and African varieties contain thiopene, which is toxic to certain soil-dwelling worms. As such, they are great companions for tomatoes, beans and other plants susceptible to nematode damage.

Plants that use similar chemicals for protection against disease include garlic, onions and chives—commonly-known compatibles that prevent black spot on roses and scab on apples. Likewise, brassica roots release chemicals that suppress some soil-borne diseases. Equally important are silica-rich plants such as comfrey and borage (herbaceous, used medicinally and as salad), which can neutralize rust, fungal attacks and other water-borne diseases. And, dandelions in a tomato patch are a good thing since their presence may deter fusarium wilt, a soil-borne fungus that reduces plant health and yields.

Other ways companion plants protect is by keeping things cool. Summer heat can take a toll on radishes, spinach, lettuce and turnips. Larger plants, such as pole beans and tomatoes, provide needed shade that conserves moisture and reduces heat that causes these vegetables to become woody or bolt.

Most pests locate their next meal from their host plant’s chemical odors or color. A diversified garden boasts a complexity of plant odors, colors and textures, thereby composing a natural barrier that makes it harder for pests to locate their target meal. How easy it would be for the cabbage moth to attack an area growing only broccoli and cabbage. By surrounding and interplanting that same area with carrots and onions, you confuse the moth by masking the scent of broccoli and cabbage.

Strong-scented plants also benefit their neighbors by masking their scent, especially for pests that rely on scent to locate good eats. Rosemary, sage, lavender, oregano and other aromatics often foil aphid attacks on susceptible neighbors. Another idea is to plant the garden perimeter with garlic and marigolds to repel aphids and beetles.

Some plants repel bugs simply by creating a physical barrier between the critter and the plant it wants to eat. If raccoons are raiding your corn, try surrounding it with a scratchy barrier of squash vines. Or, consider the fact that flea beetles love to devour cabbage and cauliflower, but never seem to bother the sticky, hairy leaves of tomatoes. Catnip is another that repels flea beetles, but also Colorado potato beetles and green peach aphids. However, you don’t necessarily have to plant catnip in your garden to benefit from its protection. Catnip easily self-seeds, and if you grow it outside the garden it can then be cut and used as a protecting mulch.

Additional repellent plants are leeks, onions, and rosemary against the carrot fly; parsley and tomatoes against the asparagus beetle; geraniums and petunias against leafhoppers; southernwood against cabbage moths; and nasturtiums against whiteflies.

There are some bugs you want to attract because they prey on pesty ones. These insatiable insects seek out and destroy pests such as aphids, slugs and snails, cucumber beetles, caterpillars, and other nasty bugs that wreak havoc in your garden.

Adult beneficials and their larvae feed on insects, however these hard-working adults also need pollen- and nectar-rich flowers to survive. Begin with spring-flowering plants such as sweet alyssum and sweet woodruff. Include long-blooming plants like marigolds, coreopsis and petunias, and extend the season with later-blooming asters, chrysanthemums and salvias.

Attract parasitic wasps, lacewings and syrphid flies with ­flowering members of the umbel family, including yarrow, parsley, dill and chamomile. This will greatly reduce pest populations of caterpillars, aphids, leafhoppers and thrips. Sunflowers, echinacea, cosmos, zinnias and others in the composite/daisy family are prime flowers for luring large predatory insects that dine on cucumber beetles, grasshopper eggs, slugs and caterpillar pests. And, when you get behind on harvesting the broccoli and lettuce, leave them be—their flowers provide food for beneficials.

Another way to keep bad bugs in check is to attract birds that feast on insects. Bugs from soil-dwelling grubs to codling moths provide a feast for chickadees, robins, wrens, swallows and other bug-eating birds.

Attract these beneficial birds by growing a mix of nectar, seed and fruit-bearing plants. For example, cosmos, asters, zinnias, sunflowers and other seed-bearing annuals or perennials attract a variety of songbirds that feast on insects. And tubular- or bell-shaped flowers rich in nectar—such as bee balm, pineapple sage, nicotiana, verbena and salvia—lure in hummingbirds, which also dine on caterpillars and small insects.

Companion planting is all about diversity, which is key to any healthy garden. So, go ahead and experiment with your own neighborly plantings. Grow flowers and herbs among your vegetables, and tuck a variety of vegetables in your flower bed. The result is bound to be a more beautiful, sustainable and bountiful garden.

Kris Wetherbee specializes in writing about gardening, food and outdoor living. Her publishing credits include over 60 regional, national and international magazines.