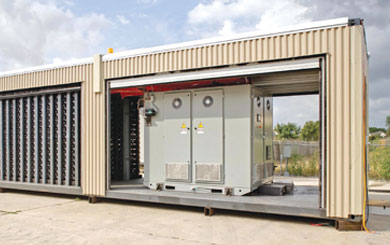 One of the main obstacles to widespread use of wind and solar power production is nature itself: The wind doesn’t always blow, and the sun doesn’t always shine. But electric co-ops are on the cusp of efforts to develop technology aimed at storing excess renewable energy for when it’s needed most.

Battery storage systems were developed in the 1970s and have become more viable on a large scale, thanks to recent chemistry breakthroughs that increase the longevity while lowering the cost of batteries. If battery energy storage at the utility level can be made commercially viable, it could result in a revolution for the aging American electric grid.

Wind and solar energy are called “intermittent” power sources—meaning they don’t provide a steady supply of electricity like traditional generation fuels, such as coal or natural gas. Even in the best situations, the wind blows an average of only about 30 to 40 percent of the time and usually not during hot, humid weekday afternoons or extremely cold mornings when electricity use spikes. Meanwhile, solar energy production can dramatically drop even when a band of fluffy clouds briefly passes over the sun.

That’s where battery energy storage comes in. For example, this technology can store electricity produced when the wind blows at night and the sun shines for use during times of “peak demand”—the electric utility industry’s version of rush-hour traffic, when power use skyrockets—to avoid buying expensive supplemental power.

So far, a handful of electric co-ops across the country are testing various ways to use these batteries.

Harnessing Energy Saves Money
Battery storage systems are a big investment for any electric co-op, but the good news is that benefits exist beyond leveling out renewable energy supply.

“Properly managed battery storage systems can delay the need for building expensive transmission lines that are difficult to get permits for in the first place,” says Dale Bradshaw, a senior program manager with the Cooperative Research Network (CRN), the research and development arm of the National Rural Electric Cooperative Association (NRECA). “It also reduces wear-and-tear on baseload power plants, which operate year-round to provide dependable electricity at a low cost, and can make electric distribution systems run more efficiently. All these opportunities add up to cost savings for consumers.”

At present, pumped-storage hydro—a hydroelectric plant that generates power by using water previously pumped to an elevated reservoir during off-peak hours, when electricity is less expensive—remains the largest-capacity form of energy storage available. Another option, compressed-air energy storage—power plants “fueled” by air pushed into an underground cavern during times of low electricity consumption—has received increased attention because it can be expanded relatively cheaply. PowerSouth Energy Cooperative, a generation and transmission co-op based in Andalusia, AL, operates one of only a few compressed-air energy storage facilities in the United States.

“Pumped-storage hydro and compressed-air energy storage facilities generally operate when electric use soars,” mentions John Holt, former NRECA senior manager of generation and fuels. “But geography limits where they can be located.”

This means development of better batteries could be the key to wide use of energy storage technologies.

Before central station electric service came to rural America via the electric cooperative movement in the 1930s, farmers used “battery sets” that were recharged with windmills and ram pumps. In this situation, the ram is often useful—especially for pumping water uphill—because it is self-powered. A ram pump requires no outside power source other than the gravity from flowing water. Like conventional, sealed lead-acid car batteries, those contraptions could go only through a limited number of discharge/charge cycles before they were exhausted.

Fast-forward to 2013, and developers are aiming for batteries that can function through 80 percent discharge for 10,000 cycles—allowing for longevity of three decades or more.

“If you’re supplementing wind or solar, you’re going through a complete cycle on a daily basis,” Bradshaw notes. “In other words, a long-cycle life remains key.”

What Energy Storage Means for the Future
The U.S. Department of Energy forecasts that energy storage will significantly change the electric grid. With it, the nation could possibly create an electricity “stockpile” like the Strategic Petroleum Reserve. But initially, energy storage systems will make renewable generation sources more financially feasible—a critical step as U.S. lawmakers contemplate ways to create a more diverse energy production portfolio.

“Co-ops could also use battery storage systems to cut down on blinks—those momentary service interruptions that force you to reset your digital clocks,” Bradshaw notes. “If enough energy is stored, power could continue to flow to homes during such an event.”