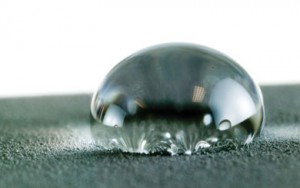 New protective coatings developed for power lines may guard your cell phone, too.

Imagine dropping your cell phone into a swimming pool—and then, after a panicked retrieval, finding it’s completely dry and works just fine.

This scenario is now entirely possible thanks to recent developments in water-repellent coatings known as superhydrophobics. Once applied, these coatings make a surface not only water resistant (like a Gore-Tex-treated raincoat), but completely untouchable by liquids. The potential is astounding.

“Practical application of this technology will save electric consumers millions of dollars in repair costs by protecting equipment that is vulnerable to liquids, like ice,” asserts Tom Lovas, technical liaison and contractor with the Cooperative Research Network (CRN), the research and development arm of the National Rural Electric Cooperative Association.

Scientists refer to superhydrophobics as the “lotus effect.” Revered by many Far East cultures for its purity, the aquatic lotus plant boasts large, round leaves covered in hairy micro- and nanoscopic protrusions. These protrusions instantly repel liquids (such as raindrops) by forcing them outward at a 150- to 180-degree angle.

In essence, that force allows air to enter between the leaf and the droplets, keeping water from ever actually touching the leaf. In fact, if you were to immerse an aquatic lotus into a tank of water, the foliage would appear coated in shimmering translucent silver because air is trapped between the water and the leaf’s surface.

For electric utilities, Dr. John Simpson, a pioneering researcher at the U.S. Department of Energy’s Oak Ridge National Laboratory, has developed a glass-based coating that he says could be applied to power lines and other outdoor electrical equipment. Simpson’s powder creates a microscopic air layer between the coated material and any water on the surface so that, just like a lotus leaf, the material stays dry even if totally submerged in water.

In a simulation test conducted in an environmental chamber at the lab, Simpson sprayed cables in freezing water and found that only a small ridge of ice accumulated, which easily vanished with a quick tap. “In the real world, vibration from power flow plus movement from wind would continually knock any ice off,” Simpson points out.

There’s another feature of superhydrophobics that mimics the lotus leaf: “self-cleaning.” The lotus leaf’s continual movement—caused by wind, rain, waves or passing animals—drags away dust particles, fungus or other potentially harmful contaminants. Similarly, Simpson’s coating allows power lines and attached devices to repel water droplets that, in turn, carry away salt and other elements contributing to deterioration.

“Every winter, ice and freezing rain cause power lines to snap and equipment to short out,” Lovas remarks. “And in coastal areas, sea spray coats distribution and transmission equipment with corrosive salt. These harsh conditions cost electric utilities, and consequently consumers, millions of dollars every year in equipment damages. A superhydrophobic coating could prevent these problems and improve service reliability.”

If his formula proves effective in practical applications, Simpson estimates that losses to large transmission lines could be reduced by 40 to 90 percent—saving individual electric co-ops hundreds of thousands of dollars annually.

In partnership with researchers at Georgia Institute of Technology, CRN has been field-testing its own superhydrophobic coating. “Superhydrophobics are a prime focus for our research because part of our job is to create solutions for electric co-ops,” Lovas explains. “Ice and corrosion continue to be very expensive concerns. We hope to change all that.”