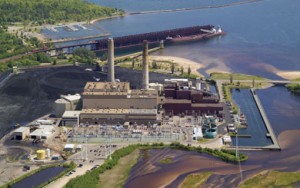 Wolverine Power Cooperative and We Energies agreed in late November to pursue joint ownership of We Energies’ Presque Isle Power Plant. In exchange for an approximate one-third ownership interest in the facility, Wolverine will fund construction of a state-of-the-art air quality control system for the plant.
The plant, located along the shore of Lake Superior in Marquette, consists of five coal-fired units capable of generating approximately 344 megawatts of electricity. In October 2011, We Energies announced the plant’s potential retirement, targeted for 2017.

“We met with executives from We Energies in November 2011 to discuss opportunities for working together,” explains Eric Baker, president and CEO of Wolverine. “The discussion led to a proposed joint venture that would keep the Presque Isle plant open and meet new air quality requirements.”

We Energies and its employees will continue to operate the plant, as well as the air quality control system.

The two companies must first obtain approvals for joint ownership, as well as installation of the air quality control system, from state and federal agencies, including the Michigan and Wisconsin public service commissions, the Michigan Department of Environmental Quality, and the Federal Energy Regulatory Commission.

“The Presque Isle Power Plant provides needed baseload power supply for our members, in addition to protecting grid reliability in northern Michigan,” Baker says. “We are pleased to have a quality operating partner in We Energies.”

Michigan Gov. Rick Snyder was in Marquette in late November to express his support for the continued operation of the Presque Isle Power Plant.

“The partnership of We Energies and Wolverine Power Cooperative to keep the Presque Isle Power Plant open is good news for the current and future availability of a reliable electric supply for businesses and residents in the Upper Peninsula,” Snyder said. “The agreement will also be good for the economy with more than 100 workers remaining on the job, and for the environment with the plant’s new state-of-the-art emissions equipment. This is a great example of how, through relentless, positive action, we can come together to make Michigan a better place to live and work.”