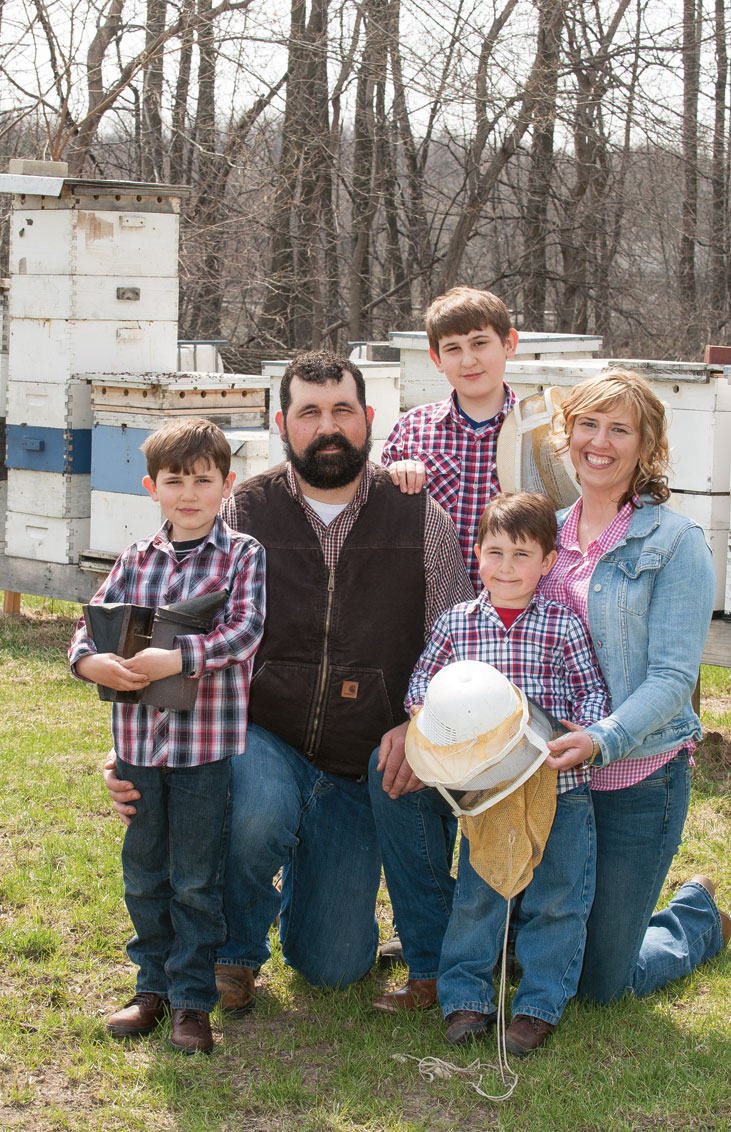 Ask most people what bees contribute to the world and they’ll name three things: honey, wax and stings. Put the question to Josh and Jodie Kieliszewski and you’ll get a longer list: soap,  body creams, ointments, lip balms…

Another unusual fact about the Kieliszewskis: While describing the wild swarm of bees that set up housekeeping in a hollow maple tree near their home in 2007, they call it a “blessing.”
One person’s threat is another’s opportunity.  The swarm might have caused the average person to summon a pest control company. Josh and Jodie, who share an interest in the natural world, found the bees fascinating. “We saw intelligence…a social structure,” Jodie says.

The swarm moved on, but not before the Kieliszewskis were bitten by the beekeeping bug—a passion that eventually became Bee Lovely Botanicals, LLC (beelovelybotanicals.com)—
a home-based business offering handmade, all natural bee-related products sold at Michigan farmers markets and on the internet. Honeybees have taken a beating in recent years. Colony Collapse Disorder—the result, experts believe, of pesticide overuse, has forced many commercial beekeepers out of business. This is an agricultural crisis because honeybees are essential for pollinating crops like apples, blueberries and cucumbers, and the U.S. Department of Agriculture (USDA) notes that one-third of the food we eat is pollinated by bees.

Recognizing the importance of honeybees in our food supply, the USDA will, according to the Associated Press, pay farmers and ranchers in Michigan, Minnesota, Wisconsin and North and South Dakota to reseed pastures with clover, alfalfa and other plants that attract bees. Publicity surrounding Colony Collapse Disorder has ignited interest in honeybees, and backyard beekeepers like the Kieliszewskis, are stepping up to fill the gap.

Josh and Jodie live in Unionville, Mich., with their three sons, where they are members of Thumb Electric Cooperative. A certified athletic trainer, Jodie now divides her time between her boys and the family business. Josh, a fisheries and wildlife biologist,  is a quality-control scientist in his day job, but beekeeping, he says, has transcended from a hobby to a second job. Not that he’s complaining. “It’s all fun; it’s not really work,” he explains.

The business, however, is not without setbacks. This winter’s extreme cold took a heavy toll on the Kieliszewskis’ bees, with only five out of 40 hives surviving. An average hive holds 60,000–70,000 bees
at its peak occupancy. But the heavy losses won’t stop the Kieliszewskis—they switched to a hardier breed called the Carnolian honeybee. The Kieliszewskis pride themselves on keeping their operation friendly—to their bees, the environment, and the people who use their products.

“We do a lot of research, and are really careful about our ingredients,” Jodie says. “We personally use all the things we make.” They also resist using chemicals on their hives— even if it means taking bigger losses in harsh weather. Josh says that he’s been stung “a time or two”—especially in the beginning, when he didn’t own the proper gear. His dark hair doesn’t help. Bees, he explains, equate the color black with bears and other predators.

Jodie casually mentions the time a swarm chased her 300 feet, and stung her 20–30 times. Bees, she says, have different personalities, and this swarm was particularly ornery. Naturally, the Kieliszewskis know something about bee sting remedies—both conventional and unusual—noting they have “tried almost every bee sting remedy known to man.” Jodie likes meat tenderizer, while Josh prefers a remedy that’s free and always available: spit. It has enzymes, he says, that break down the venom.