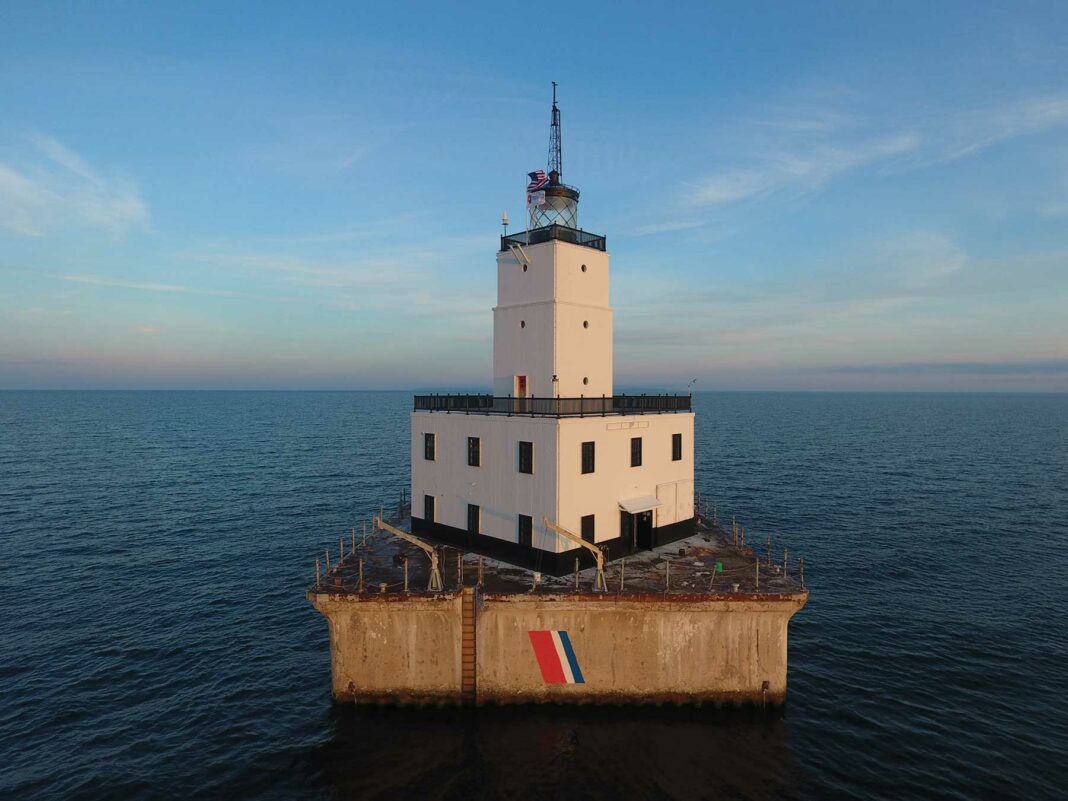 There is a mystery, magic, and something altogether romantic about lighthouses. Whether it’s tales of swarthy sea captains and ghost-like specters wandering catwalks or the simple metaphor of light in the darkness leading one to safety, lighthouses feel like they have stories to tell.

The story of North Manitou Shoal Light Station, built in 1935 and known locally as The Crib, in the straits between the Manitou Islands and Sleeping Bear Dunes, has its own rescue story to tell. It starts with a peculiar notice in 2016 alerting the public that there would be open bidding on The Crib in a public auction.

If you’re wondering how one goes about purchasing a lighthouse, ask a group of friends who collectively are the North Manitou Light Keepers (NMLK), a nonprofit group formed specifically to purchase, restore, and open this maritime treasure to the public. In their everyday lives, these lighthouse rescuers are known as Todd and Natalie Buckley, Dave and Sherry McWilliam, Jake and Suzanne Kaberle, and Dan and Anna Oginsky, who all live and work around Michigan.

“Within just a few days, a couple of my friends had mentioned there was ‘this lighthouse’ for sale,” remembers Dan Oginsky, president of North Manitou Light Keepers and Great Lakes Energy member. “At first, you can’t help but think—‘how cool would it be to own a lighthouse?’ It’s only later you start to realize what a big undertaking it’s going to be.”

Dan, his wife, Anna, and their friends realized that if they were serious, they needed to create a more formal organization and started NMLK as a nonprofit to explore the specifics of what custodianship of a lighthouse would look like.

They decided to move forward with the bidding process and came up against one other serious bidder, each day outbidding the Light Keepers and testing their resolve. Finally, the team decided just one more bid, and then it was time to step away gracefully. They placed their final offer … only to be outbid once again.

“With 24 hours between bidding rounds, we had a few hours left when my wife, Anna, came to me and asked, ‘Would you be mad if I thought we should bid once more?’” Dan said.

Anna had finally taken a long look at the pictures of The Crib and told Dan, “It told me not to give up on it.”

The Light Keepers conferred and made one last bid. With that final bid, they secured the lighthouse.

It’s an exciting story of an endearing victory, except now the Light Keepers had a “mothballed” lighthouse, covered in guano (yup, bird excrement), and the mighty task ahead to restore it to some former glory.

With a laundry list of not-inexpensive tasks to complete, the Light Keepers drew on the community and the affinity so many have for lighthouses. The team set an ambitious five-year goal to have The Crib ready for its first visitors in July 2021.

“We wanted to honor the Coast Guard and the noble work they and this lighthouse did to keep people safe in the straits,” said Dan. “We also want to build community, giving people something positive to rally around.”

In the end, more than 160 bags of garbage, guano, and debris were hauled away from The Crib. Then scaffolding was built so that the lighthouse could be blasted, primed, and painted. Next came the removal of steel plates and 1930s windows and the replacement with new, clear glass—letting the light shine on the inside for the first time since the 1980s.

The NMLK is already looking at phase 2 of the project, which involves renovating the lighthouse’s interior—including a kitchen, great room, and multiple sleeping quarters that would allow individuals to stay overnight at The Crib.

While always keeping things moving forward, the Light Keepers were able to take a moment to celebrate. With two weeks to spare, the first visitors took a charter out to The Crib for a tour, with more scheduled throughout the summer. NMLK is looking to expand tours more next summer and recommends signing up for their newsletter and membership at northmanitoulightkeepers.org to be the first to know.

So if you’ve ever wanted to visit a maritime feat in the middle of one of the country’s most beautiful areas, or have ever dreamed of being part of a rescue mission of history, maybe it’s time to see some folks about The Crib and what it means to be a lightkeeper.

Getting Power To The Crib

Getting power out to The Crib is a big part of phase 2 planning. Once NMLK started talking to folks in the community about how to power up, community members connected the team to Cherryland Electric Cooperative, who recently went out to The Crib to test equipment and see what it would take to power up the mighty beacon.