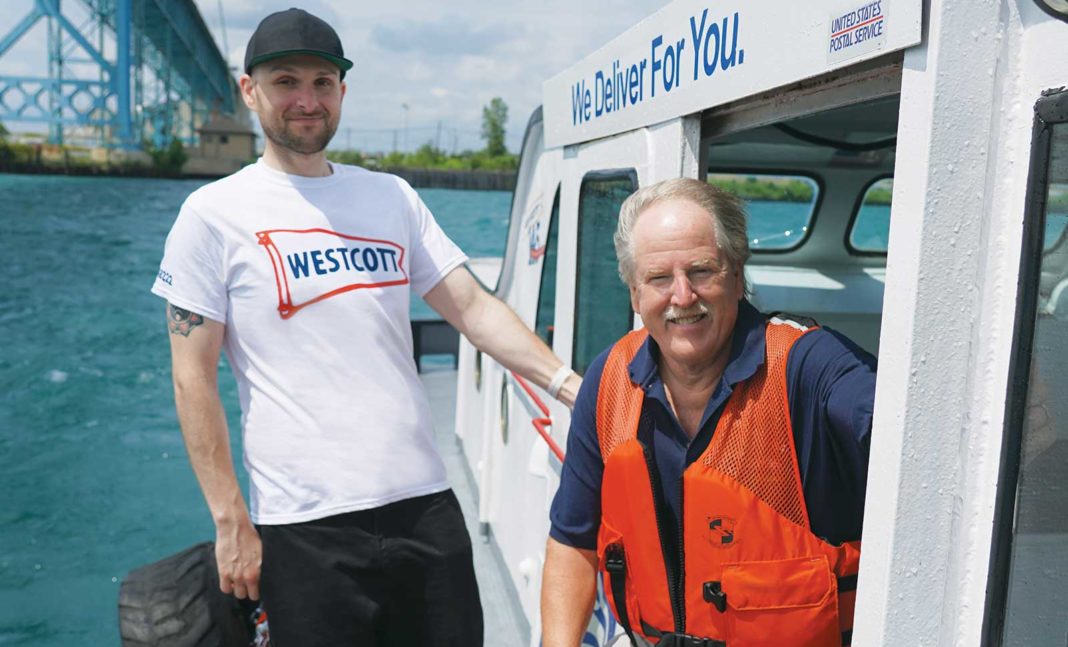 It’s not just that Hogan likes water, or has lived and worked on it most of his life. He is the fourth generation to operate the J.W. Westcott II, a mail boat and the first floating ZIP code with the U.S. Postal Service.

The love of water goes back to Hogan’s great-grandfather, Captain John Ward Westcott, who founded the J.W. Westcott Company back in 1874. Back then, it was simply John rowing a small boat out to commercial ships passing through the Detroit River. He started by delivering shipping orders and updates on routes and ports. Nearly 150 years later, the vessel and the operation have grown, while never seeming too big.

“Before cell phones, one place things didn’t change immediately was on the water,” said Hogan. “You wrote a letter and hoped it would get there in a week and wait for a response in another week. Boy, things have changed.”

Changed indeed. Now instead of handwritten letters and telegraphed route instructions, it’s online prescriptions, packages from Amazon and occasionally, a locally-baked pizza. The pizza started as a fun service the Westcott provided for a river tour. However, open radio channels being what they are, sailors caught wind and some have ordered up pies as their ships pass through the Port of Detroit.

“While it’s sometimes crazy how much things have changed since even I started,” muses Hogan, “out here, there is still a pace that is consistent with life on the water.”

Hogan started in the company’s 100th year after he graduated from high school in 1974. These days the Westcott runs 24-hour shifts, seven days a week, from the time it launches in April. The three shifts are operated by two veterans who have been with Hogan over 30 years—Sam Buchanan and Bill Redding. No two days are the same, with the possible exception of the fresh pot of coffee put on at the beginning of each shift, as each crew swaps stories.

If other ships are in the neighborhood, the fresh crew can jump right into the fray—loading, unloading and/or delivering “mail by the pail.” This literally consists of large buckets on ropes that are raised and lowered between passing ships and the Westcott—delivering mail addressed to the individual, their ship’s name, and Marine Post Office, Detroit, Michigan 48222.

Among the crew sweeping in for a shift is Captain Jimmy Hogan, Jim’s son and the fifth generation of Westcotts to work the ship. While the elder Hogan had started working right out of high school, he wanted to make sure his sons didn’t feel obligated to join the family business.

“We wanted to make sure the kids did something that drove them in their lives. We didn’t want the business to feel like a burden,” he said.

For 147 years and 5 generations there is a legacy by any standards. But if Jim Hogan knows anything, it’s that life on the water is constantly ebbing and flowing. He’s found himself spending more time down at the riverfront office since April. Considering his 47th season with the business, seeing how things have changed. Seeing how things have stayed the same. Wondering, as we all do when reflecting on our lives, what it was
all about.

“This isn’t a ‘get rich’ business,” muses Hogan. “But I’ve come to realize that I’ve been so fortunate with the experiences I’ve had in my life. Experiences that I owe to a wild idea my great-grandfather had.”

Hogan pauses like any great seaman setting up the moral of the story and says, “To be blessed by the opportunity to be associated with so many good people in my life—such a great crew. I guess I am rich.”

To learn more about the legacy of this Michigan business, visit jwwestcott.com