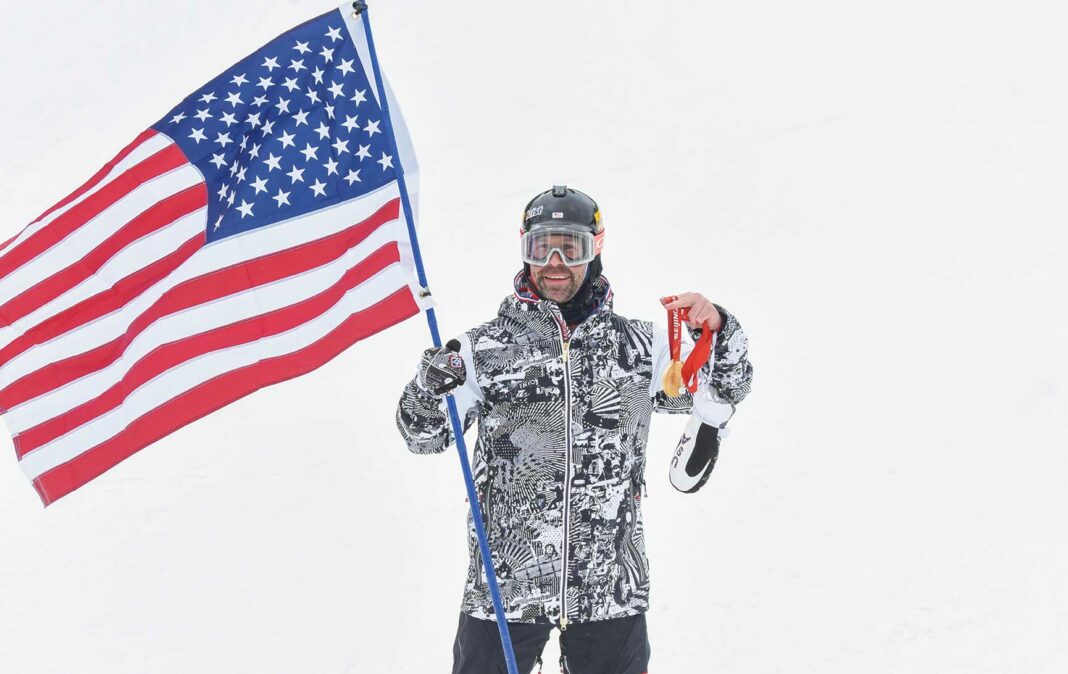 It’s not every day that an Olympic gold medal finds itself in Michigan’s Upper Peninsula. But that’s what happened after Nick Baumgartner of Iron River captured first place with teammate Lindsey Jacobellis while competing in the mixed team snowboard cross event at the 2022 Beijing Olympics.

This event, which made its debut in this year’s games, features a male and female rider from the same country paired and placed into a multi-team bracket. Competitors tear down a course with turns, jumps, rollers, and drops designed to push them to their limits.

Competitive snowboarding is not for the faint of heart. “Snowboard cross is chaos in every sense of the word,” Baumgartner said. “We are doing something that is so unpredictable. We go down the course at highway speeds of 50–60 mph on a five-foot-long board with metal edges that are sharp as a sword, with nothing to protect us except for the helmet on our head.”

At 40, Baumgartner was the oldest medalist in Olympic snowboarding history—but he started riding early. “When I was 10 years old, I got this funny-looking plastic snowboard for Christmas, and I took it to the sledding hill behind my house,” Baumgartner said. “Fast-forward 30 years, and that plastic snowboard and my persistence turned into an Olympic gold medal at age 40. To think that 18 years after I started on this team, here I am still going, I would never have imagined it. You’re never too late to take what you want from life.”

When reflecting on receiving his gold medal, Baumgartner said, “I’ve always been a huge fan of ‘The Star-Spangled Banner.’ It hits a little bit different when you’re standing there on the podium and listening to it being played because of something you did. It was a proud moment and very emotional for me.”

That emotional celebration followed him back to the U.P. A born and bred Yooper, Baumgartner wasn’t surprised when crowds of local people welcomed him home from Beijing. “I know the people of the U.P., and I know Yoopers, and it didn’t surprise me at all that the celebration started so far away with people standing out on the side of the road hooting and hollering in the freezing cold weather, holding signs that they had made,” Baumgartner said. And when he says, “so far away,” he means it: His supporters began lining the route 60 miles from his hometown, where a community parade awaited him.

But even a 60-mile celebration couldn’t hold a candle to the welcome home from his 17-year-old son Landon. “Getting a gold medal is wonderful, but Landon is my greatest accomplishment. It has meant so much to me to be able to share this journey with him and to have him be proud of me,” Baumgartner said, his voice brimming with emotion. “That’s what really matters to me. I’ve been trying to show him through my whole career what it takes to be a champion, how you don’t give up on your dreams, and that you can accomplish anything. I think he learned those lessons along the way, but winning the gold medal definitely cemented those ideas for him.”

Nick Baumgartner is a model of commitment and determination. Entering the elite atmosphere of gold medal athletes did not come easy. It took considerable work, endless training, and competing at countless events for many years, but he made it to the top. Michigan is not just proud to be the home of an Olympic gold medal winner, but incredibly proud to be the home of Nick Baumgartner.