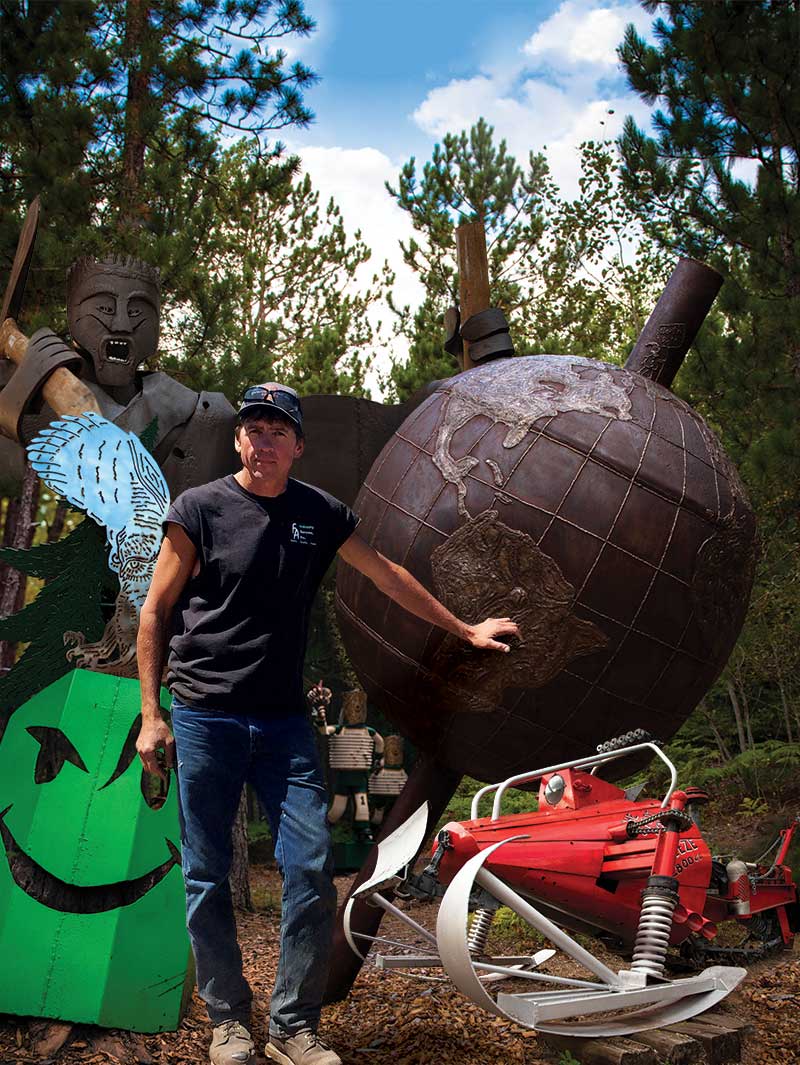 Highway M-28, east of Marquette, is a typical stretch of U.P. road—until you notice the startling, out-of-place objects emerging from the nearby woods. Some say the experience is like stumbling upon a north woods “Jurassic Park.”

In truth, you have entered the fantastical and far-friendlier world of Lakenenland Sculpture Park.

Yes, you will find a dinosaur or two roaming the nearly 40-acre woodland park. But they’re gentle giants—over 80 whimsical sculptures created by a single artist from bits of salvaged iron. Each of the works scattered throughout the park are the creation of a local iron sculptor, Tom Lakenen, 53.

The park is the result of a major lifestyle change and grew from a single project. “I traded beer drinking and bar stools for metal sculpting,” Lakenen says with a wide grin. Working in his garage, he first crafted “Eight Dancing Wolves,” which he hesitantly displayed in his front yard. “No one threw eggs at my house, so I decided to make something else,” says Lakenen, a boilermaker by trade. These were soon joined by a motorcycle-riding skeleton and other imaginative creatures. His neighbors didn’t appear to mind his installations, but his output soon overflowed his yard. And thus was born the Lakenenland Sculpture Park.

“In 2003, I remortgaged my house for the next 100 years!” Lakenen jokingly exclaims about buying 37 acres “to scatter my ‘junk art’ around.” After years of clearing trees and building roads by himself, the park has evolved to include a visitor pavilion, band shell, two fishing ponds and a lean-to warming shack for the many winter visitors arriving by snowmobile.

The park is open year-round and there is no admission fee.

Most winter weekends find Lakenen stoking the bonfire for snowmobilers and offering free hot chocolate, coffee and snacks to upwards of 150 people. (Snowmobile Trail #417 runs through the park). His generosity is matched by his resourcefulness, since he’s become adept at bartering. In fact, Lakenen traded sand from the property with both a neighbor and a road crew, who removed enough earth to create the two large craters that became the ponds he now stocks with fish.

Lakenenland and its contents are financed solely by the sculptor himself—with one fine exception. An area doctor, Ken Buran, once left a $2,000 donation. Buran subsequently asked Lakenen if there were any other improvements he wished to make in the park. “A pavilion,” Lakenen told him, “so guests can eat their lunch in shade.” The pavilion arose from a $10,000 second donation. “Tom and his wife, Lisa, are good people,” Buran says. “They do a lot for the community. His park is unique, and I thought it worth preserving and building upon. Communities need these places as a cultural heritage and identity.”

And indeed, Lakenenland represents more than a sculpture park. It stands as a testament to creativity, determination, generosity and—above all—community. And you can’t put a price on that.

Visit lakenenland.com for more information on the park.