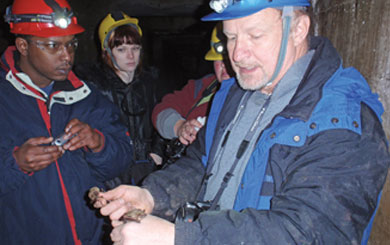 This is the only one in Michigan’s Lower Peninsula.

It’s not the typical bat cave the Caped Crusader would hang out in—in fact it’s not a cave at all—but northern Michigan bats don’t seem to care. Up to 20,000 bats hibernate every winter in the cavernous insides of the Tippy Dam spillway.

When Tippy Dam was completed in 1918 it included four large spillway gates, an unusual design that no other Consumers Energy dam system has.

“The design created large hollow chambers within the dam structure, and the chambers remain within a few degrees of the water temperature held behind it, just above freezing,” says Lorren Hannah, Consumers’ Manistee River hydro supervisor, during a tour. “It’s very much like a natural cave.”

“The stability of the Manistee River watershed—dominated by sandy, water-absorbing soil—has made it necessary to spill water through the chambers only once in nearly 100 years and that was during summer,” he explains.

Apparently it didn’t take the bats long to discover that. Routinely 16,000 to 20,000 bats hibernate in the chambers during the winter months. Although bat use was documented for decades by Consumer employees, nobody paid much attention until the 1990s when the company enlisted the aid of Allen Kurta, PhD. An Eastern Michigan University biology professor, Kurta is known for his work with bat species, particularly the endangered Indiana bat.

For the past 19 years, Kurt and his students have made pilgrimages every few years to study and catalog the Tippy Dam bats during hibernation, and again in the fall when the bats are still actively gathering for hibernation.

“The first time I saw this I was amazed at the number of bats that hibernate in here. The population has remained very stable over the last 18 years,” Kurta reports. “What I’ve been most amazed about over the years is finding a few Indiana bats and Eastern pipistrelle bats among the population.”

Eastern pipistrelles are common throughout northern Mexico and most of the United States, but typically not in northern Michigan. They hadn’t been found north of Berrien County before, and the same was thought of the Indiana bat. “A few of those bat species are finding their way north to hibernate, which might indicate climate change,” Kurta adds.

Kurta and his students handle the hibernating bats carefully to make sure they do not become active and use up excess fat reserves stored for winter hibernation.

“We handle them quickly to reserve their fat and energy. Normally, they will quickly go back into a hibernation state once we leave,” he assures. “It won’t be a problem for them.”

Consumers Energy is also on-board to minimize contact with the bats during their hibernation state, Hannah says.

“We enter the spillway chamber only when necessary during the winter months, which isn’t often,” he stresses. This policy also extends to the property around Tippy Dam that Consumers Energy owns. Many local bats, like the brown and northern, spend their summers roosting in trees around the pond. Consumers energy prohibits tree cutting on its property around the dam from May to October—the time when the bats return to the cave-like spillways.

On his last visit, Kurta says the bat population looked healthy and appeared to be stable. Many of the bats they catalog were banded during previous visits. One of the Indiana bats was banded in 1996, and of the 18,000 or so bats wintering here, probably less than 30 are the endangered species, but it’s like looking for a needle in a haystack.

Bats will live about 20 years and return yearly to the same hibernation spot unless they are interrupted for some reason, Kurta says. They are incredibly helpful to the people and the environment, he adds, as they devour insects at an incredible rate. One small brown bat can eat up to 3,000 mosquitoes in a single summer night, and they help pollinate a variety of flowers and transport many plant seeds.