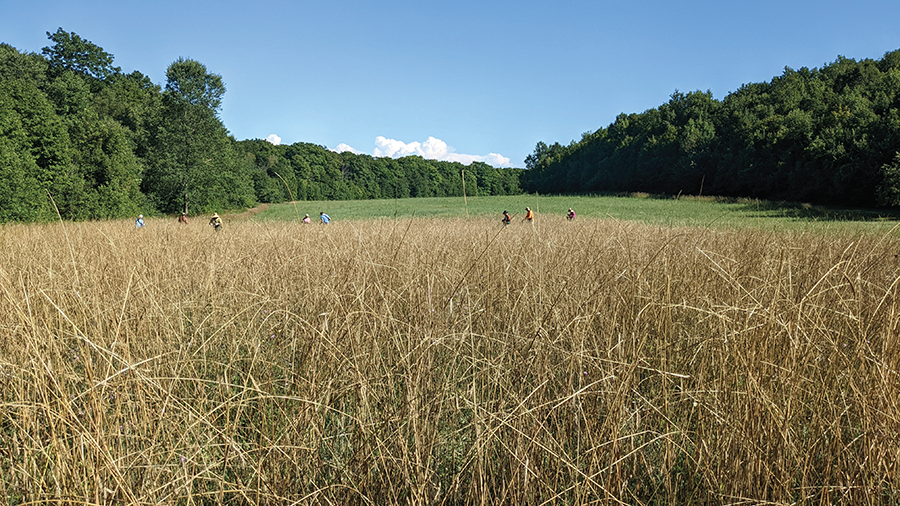 When Chad Munger held just a palmful of Rosen rye seeds in his hand in 2020, it was the beginning, or at least the continuation, of a 100-year-old story.

Munger, the founder and owner of Mammoth Distilling, with its flagship tasting room in Central Lake, and whiskey maker Ari Sussman had first spoken about these valuable seeds a few years earlier when he made a discovery while army-crawling his way through the agriculture and food archives at Michigan State University. He came across a full-page ad for Old Schenley rye in a 1934 issue of Vanity Fair touting that it was made with Michigan Rosen rye: “The most compact and flavorful rye kernels Mother Earth produces were used for this luxurious brand,” it said.

“Ari called me right away,” said Munger. “First, we couldn’t believe this rye had basically existed in our own backyard and we hadn’t heard of it before. And then the wheels started spinning on how to bring this rye back.”

The seeds had been successfully grown just off the Leelanau Peninsula on South Manitou Island for the first time 100 years ago. With the seeds shipped from Eastern Europe in the early 1900s to Joseph Rosen, they eventually found a home at MSU, where Rosen worked with colleagues to test the flavor. The more the Mammoth team dug into the details, the more amazing the story became. They came to a simple conclusion—this was not your average rye.

“It quickly became coveted by the country’s top whiskey makers,” said Munger. “Unfortunately, it had a fatal flaw—it cross-pollinated very easily and would quickly lose the magical flavor that made it so special.”

Enter South Manitou Island: Being 16 miles from the Michigan coastline and not too far from MSU, it eliminated the danger of immediate cross-pollination. While Rosen rye had a good run supplying whiskey makers for decades, post-Prohibition times brought a hefty hurdle. During those “dry” years, folks had become accustomed to the low price tag of corn-based whiskey.

As the folks at Mammoth kept pulling threads on this unraveling story, they quickly addressed the obstacles of bringing Rosen rye back, as well as introducing interested parties into the existing story of the strain.

“We didn’t create it, we rediscovered it,” said Munger. “It really felt like we were being charged with keeping the story alive.”

Many amazing groups helped to keep that story alive, from the USDA, to MSU, to the National Park Service (which manages South Manitou Island as part of the Sleeping Bear Dunes National Lakeshore), in order to bring Rosen rye back to Michigan.

The initial crop, just 14 acres, was planted in October 2020, nearly 100 years after the first seeds made their way to Michigan. Eighty years after the last crop of Rosen rye left South Manitou Island, members of the Mammoth team celebrated the first Rosen Rye Day this past August to harvest the grain. The hope is to continue this historical process for years to come.

None of it has been easy. Or even logical. Farming on South Manitou Island comes with its own set of unique obstacles, including no irrigation, no pesticides, a lot of work done by hand, and concerns that the team won’t know for years how the whiskey will taste.

So, why do it? Why spend the time, energy, and, let’s be honest, money on a venture that may never pay off? Munger suggests that the entire team, including those at Michigan State, the NPS, and the whiskey community at large, all agree—“Because it’s the right thing to do. Bringing the grain back is good for the world.”

If that’s the “why,” Mammoth is certainly slogging their way through the “how.” Watching the research, the passion, the grit, the sweat on the brow, and the vision, it’s not a simple path and it takes more than falling in love with a great story. It takes a leap of faith.

Munger identifies the simple, but not at all easy, path forward: “All we need to be willing to do is the unreasonable thing.”

Unreasonable or not, there’s an excitement around this agricultural rediscovery and a connection to history, land, and rich storytelling that is at the heart of Mammoth Distilling.