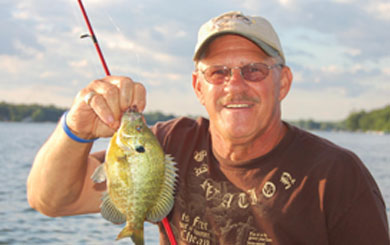 There are a lot of ways to make a name for yourself as an angler: catching record fish, winning fishing tournaments, designing productive lures, even writing about the experience.

But Bob Miskowski didn’t do it any of those ways. Miskowski became one of Michigan’s legendary anglers simply by catching fish.

A 70-year-old retired maintenance man who lives in rural Lenawee County, Miskowski is known statewide by the “Bluegill Bob” moniker that he was given by a Department of Natural Resources fisheries biologist over 20 years ago. And though he’s carried the nickname around for so long, he’s still surprised when another angler pulls up to him on the lake and asks: “Are you Bluegill Bob?”

Miskowski says his first recollections of fishing are as a 6-year-old accompanying his father on the ice. His predilection for piscatorial pursuits is in his genes, he says.

“My father taught me everything I know,” he says, proudly. “He was a heckuva fisherman, and so were his brothers.”

Truth is, Miskowski started picking up tips from other anglers, fishing magazines, and even developed a different style of fishing than the rest of his family while he was still in single digits. He has refined his style over the years, until he established his reputation as one of the best bluegill fishermen anywhere.

First, he said, he started using simple flies instead of the standard hooks and worms used among panfish anglers. Instead of a bobber, he uses a heavier plastic practice plug, which, while still floating, allows him to cast much further distances than a lightweight bobber. As a result, it covers more water and presents his bait to more fish. While the heavier float doesn’t submerge like a light cork when a fish bites, he just watches for any unusual motion and then sets the hook.

Although he’s spent plenty of time fishing for everything from suckers to salmon, Miskowski seems to always gravitate back to bluegills.

“You can always catch bluegills,” he explains. “You may not catch a lot of them, but you always catch some—always. With bass or pike or walleye, you can fish all day long sometimes and get skunked, but with bluegills, that just doesn’t happen.

“They’re fun to catch, too. They fight as well as any fish in the lake. And they’re good eating—ask anybody.”

Miskowski begins the season as soon as the ice is off the lake. He concentrates on shallow, dark-bottomed backwaters—often canals off the main lake—where the water warms up fastest. He starts with just the bobber and an unweighted fly, which sinks slowly in the cold water. If it’s not working, he adds a tiny bit of bait—usually a spike (fly larva) or wax worm (bee moth larva). As the season progresses and the fish move a little deeper, he adds some lead wire to the chenille body of his hand-tied flies so they’ll sink faster and get down to the strike zone more quickly.

Miskowski maintains this same presentation until the bluegills go on the beds, then, when the sunfish become more aggressive, switches from insect larva to red worms—the bait he’ll stay with all summer until the water begins to cool again in the fall.

Once ice fishing season arrives, Miskowski is really in his element. He’s designed his own lightweight combination seat-and-gear box that has become known as a “Bobby Box,” in which he carries a lantern for keeping his hands warm. Miskowski dislikes ice shanties or shelters—“I want to be out on the ice and be able to pick up and go and where I can move around,” he says. That’s a big part of his strategy; he begins the day by drilling a number of holes and rarely spends more than a couple of fishless minutes at one before he moves on.

It’s a fairly rare day that Miskowski doesn’t bring back his limit of fish for the fryer. It used to be a rare day that he didn’t fish, too, though he admits that as the aches and pains of advancing age make their presence known, he’s down to fishing three or four days a week now—anytime the water is open or the ice isn’t unsafe.

“I used to fish every day, and sometimes twice a day, except on Sunday,” adds Miskowski, a deeply religious Christian, who signs off on the telephone with “God bless.”