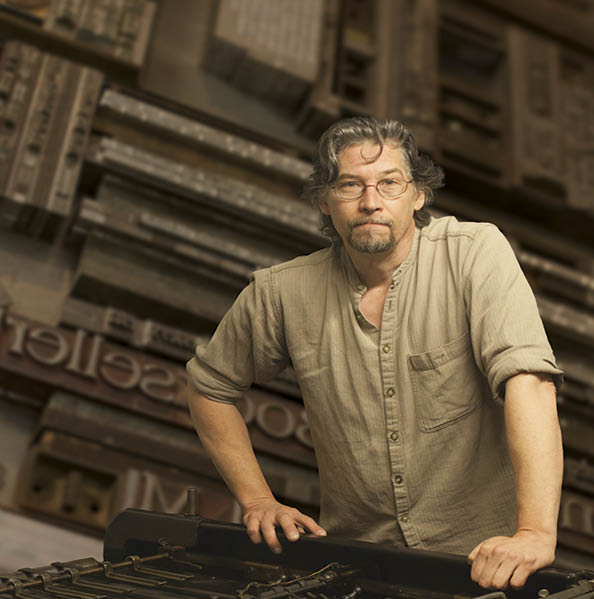 Chad Pastotnik’s alchemy is half art, half toil.

In a recent blog, Pastotnik, who runs Deep Wood Press out of his home in the woods near Mancelona, wrote: “Sometimes running a business and being an artist have nothing to do with actually making art.”

“I make books the old-fashioned way,” Pastotnik says. But not quite. His limited edition fine-press creations are world-renowned and sell for up to $3,000 each. That was the price tag on a one-of-a-kind deluxe edition of Pastotnik’s treatment of Joseph Conrad’s famous novel, “Heart of Darkness.” Typically, Pastotnik’s books cost between $100 and $1,000.

Pastotnik’s type is hand-set, or cast on a linotype machine, from molten lead. His pages are printed on obsolete cylinder presses. He uses wood engravings and linoleum cuts. His handmade cotton paper is tucked into luxurious bindings of fine leather and exotic cloth. The finished product: “A piece of art that functions as a book.” By Pastotnik’s estimate, only 50 to 70 other people in the U.S. do what he does.

Pastotnik is grateful that his ancient equipment (one of his presses was built in 1911) is surprisingly reliable: “Fortunately, it’s built much better than most things are nowadays.”

Born in Cadillac, Pastotnik made his escape from northern Michigan as a young man.

On a fly-fishing trip to Antrim County around 1990, Pastotnik came upon a small fishing cabin on the Cedar River that was for sale. The bucolic setting struck a chord. He moved in. In 1992, the cabin became the home of Deep Wood Press. Pastotnik studied printmaking at Grand Valley State University. His first venture into hand-made books came in Chicago. Pastotnik says, “I get to share my wonderful life with my wife, Kathryn, and our two children. Being able to raise a family in such an amazing environment is something we’re thankful for every day.”

Pastotnik confesses that he loves fly-fishing as much as making books. Some recent titles (“The Trout in Winter,” by Jerry Dennis, for example) reflect a blending of the two passions. “It’s a good excuse for business meetings on the stream,” he says.

Among Pastotnik’s other recent books:
“The Intruder,” by Robert Traver (the pen name of John Voelker, the Upper Peninsula author of “Anatomy of a Murder”) and “There Be Monsters,” written by Pastotnik, who calls it “a little fable about how to walk in the woods.”

In 2010, Pastotnik won the prestigious Carl Hertzog Award for “Heart of Darkness,” and he’s featured in the PBS television series, “A Craftsman’s Legacy,” as “The Bookmaker,” Episode 11. It aired last fall, but you can find it at craftsmanslegacy.com/Home.

Pastotnik hopes his works of art aren’t handled with white gloves and parked in display cases, however, “I would certainly hope,” he says, “my books get read.”