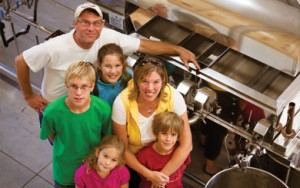 Todd Petersen sees far more in maple trees than the leaves turning color in the fall. He sees an entire industry that Michigan is potentially passing by. And he’s trying to change that, one tap at a time.

“Do you realize that maple syrup can only be produced in North America?” Petersen asks. But the stats are more interesting the farther you dig: Quebec produces about 75 to 80 percent of the world’s total volume of maple syrup. And Vermont, the top U.S. producer, follows at about 15 percent. Meanwhile, Michigan produces only .07 percent.

But here’s the kicker: “Michigan has six times the hard sugar maple capacity in quality and quantity of trees that Quebec does,” Petersen says. “We’re on to something big here, Michigan has an opportunity.”

The opportunity is one that Petersen is trying to get in front of state legislators. If, like Vermont does, the state would allow tapping of some state trees, the industry could boom.

“There’s great potential for producers to lease trees from both their neighbors and from the state,” he explains. “There’s a lot of hilly private land that can’t be farmed, and most of the good timber-quality trees have been cut. But there’s still potential in the remaining trees.”

Petersen noted that it takes 120 to 200 years for a maple tree to grow to a valuable timber size. “It’s a long, long process,” he says. “That, and the problem of overcutting can hurt more. It’s completely possible to have a balance between the timber-cutting industry, which is vital to Michigan’s economy, and maple sugaring. The model already exists in Vermont.”

The beauty of maple sugar production is that younger trees can be used and re-used. With proper technique, trees 7 to 12 inches in diameter can support one tap, trees 12-18 inches can support two, and trees 18 inches or larger can support three taps or more when high vacuum is applied through the tubing systems.

Petersen uses a new, automated high-vacuum and air-tight system that produces up to three times the yield of traditional methods to tap his own trees. “The machines literally suck the sap out of the tree like the automated milkers they use on cows in the dairy industry. It allows us to tap a much smaller hole,” he adds. “There is not as big of a wound in the tree, which makes for healthier trees.”

The vacuum-sealed system also prevents bacteria from getting into the hole and damaging the tree. And, there’s no doubt it’s entirely different from Petersen’s old hobby of tapping maple syrup. “I had 40 buckets and used a turkey cooker to make syrup!” he says with a laugh.

In the Petersen family’s relatively small sample of northern Michigan forest—27 acres of an 80-acre farm—they harvested 700 gallons of maple syrup in their first year with the new system. And the season this February was very short, due to weather conditions. Instead of the usual 40-45 day season, they had just 12 days to harvest.

“This is exceptional, considering the short season,” he says. “We garnered only about 30 to 40 percent of an average crop.”

And, the way Petersen did it is the next thing creating a buzz in the industry: using reverse osmosis. The new equipment uses electricity instead of relying solely on wood or fossil fuels.

Sap, he notes, is normally about 98 percent water and 2 percent sugar. In the old process of using evaporation, the sap was heated using wood or fuel oil to evaporate the water. It took about 3 gallons of fuel oil to produce 1 gallon of syrup.

With reverse osmosis, electricity creates high pressure that is used to force the sap through a fine membrane. The process separates out the sugar and most of the water, reducing the need for fuel oil to about a half-gallon for the same 1 gallon of syrup. The result is 70 to 90 percent less in fuel oil costs.

“This year, in our small facility, that saved us more than $3,000 in energy costs and reduced our carbon footprint significantly,” Petersen says. “In a typical year with a bigger crop, it would save us up to $10,000. The machine pays for itself in three years.” And, Petersen is hoping others are watching what he does as the new farm and equipment begins to produce data.

“We are a working model for showing Michigan what this industry can do,” Petersen notes. “What if we can grow our state’s production to 10 percent in 20 years? To 40 percent in 50 years?”

And of particular note is that the industry creates local, hands-on jobs.

“These are jobs that can’t be shipped off to Mexico or China,” he says. “It’s exciting to be able to do this here in Michigan, in Petoskey, in the beauty of northern Michigan.” In recent years, other hi-tech farms and models have popped up in Michigan, Petersen says, and interest seems to be sparking in legislators working in agriculture and natural resources.

The next maple syrup run, in February 2013, will mark Maple Moon’s second year of production. Petersen bought the property four years ago and has since invested $300,000 in the farm—a move he made with the support and hands-on help of his family, including wife Christi and their children Luke 13, Haley 11, Kyle 8 and Maggie 6.

“I wanted this to be a family-run business and I wanted my kids to learn about the values of hard work, ethics, responsibility, cooperation, communication, and the outdoors,” he says, noting that the entire family learned side-by-side as they ran lines and tapped trees.

Maple Moon Family Sugary also gives tours year-round to the public. “I want people to see this, to touch this, to see what trees produce and how,” says the Great Lakes Energy Co-op member.

The Petersen family also offers other products like homegrown honey, granolas, cookies, candies, jams, salsas, ice cream, and even root beer made from maple sugar. Visit their website (mmsyrup.com) for more about their farm and to go on a tour.