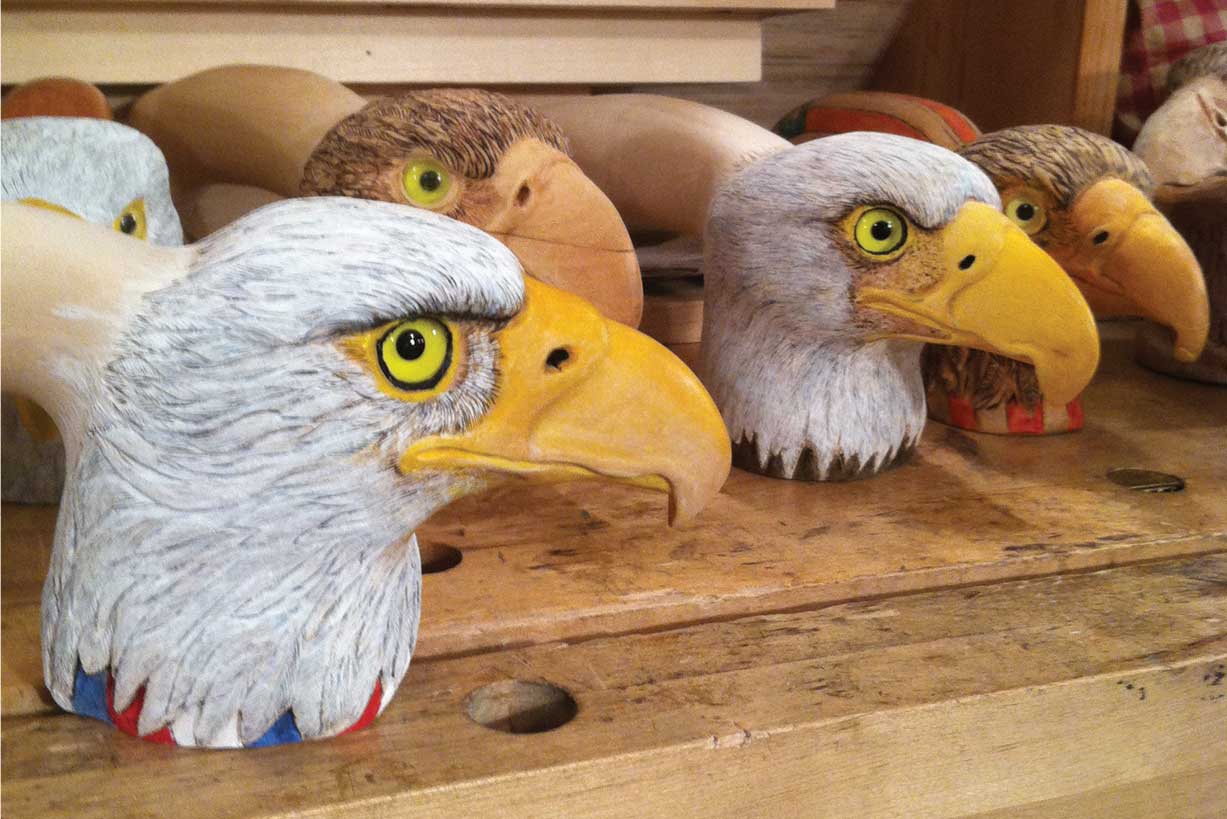 The idea came about in 2004 when Jack Nitz of Tulsa, OK, watched a news segment about wounded post-9/11 veterans.

The visions of vets with leg wounds and amputations weighed on his mind. Nitz knew that as a woodcarver and cane maker, he could make a difference in the lives of these heroic veterans.

Nitz proposed the idea of making unique canes that veterans could proudly use to the Eastern Oklahoma Woodcarvers Association. His eagle-head cane has since spawned a program that enlists thousands of woodcarvers across the nation to support and honor U.S. veterans.

In 2007, Jim Wilsford from Tennessee came to Michigan to teach a class about making these eagle-head canes for veterans. Members of the Michigan Wood Carvers Association (MWCA) were so impressed they also decided to sponsor the project. To date, over 2,500 canes have been presented by MWCA.

During a visit with my friend and carving mentor, master carver Dick Lamphier of Elk Rapids, MI, he showed me an eagle-head cane that he was working on, and explained who the canes were being made for. I was very impressed by the whole project.

Initially, Lamphier had no interest in carving eagle heads. While at a seminar in Midland, Lamphier had the opportunity to witness the presentation of one of these canes to a veteran of the Vietnam War. There were about 250 people in attendance, and hardly a dry eye in the place. Witnessing the feelings and emotions that were on the faces of so many, Lamphier became determined to do what he could to assist with this healing program. Since that day, on two separate occasions, he has witnessed veterans from Afghanistan walking with these personalized canes.

In each instance, he complimented the veteran on the beauty of his cane. Each raised his cane with a BIG SMILE to acknowledge the compliment. Clearly, they held them up with great pride! Currently, 12 local carvers are working with Lamphier to create these tokens of thanks to our veterans.

Recently, while inspecting an overhead electrical line in the Suttons Bay area, I found a large basswood near a line that had found favor with woodpeckers. The tree was a potential power outage and needed to come down. The property owner agreed to donate the wood and another Cherryland employee, Dave Bott, volunteered his sawmill to cut the logs into usable material. This wood has been donated to the Michigan Wood Carvers Association and after it has cured, will be used to create more canes.

Visit miwoodcarvers.com to learn more about the Patriot Cane/Memorial Project.