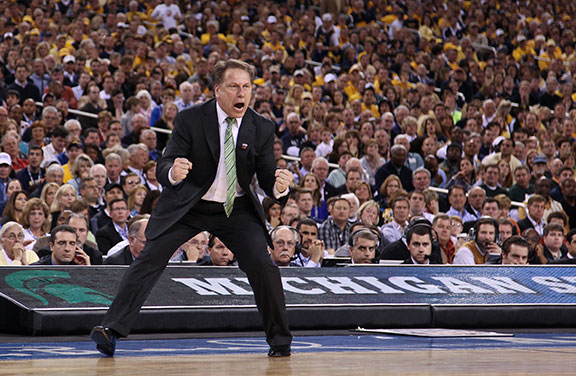 Tom Izzo surveys the basketball court in Michigan State University’s Breslin Center and still relishes what that court represents. Fifteen years earlier, Izzo led the Spartans to the NCAA championship on that very floor in Indianapolis.

After beating Florida, MSU purchased the portable court for its own use from Horner Flooring Co. Inc., which has manufactured sports flooring in Dollar Bay, MI, since 1891, the year Dr. James Naismith invented basketball.

“You wouldn’t put the U.P. and basketball together for being famous,” Izzo says. “But when you think about it, it makes some sense.”

The Upper Peninsula has been the center of the athletic flooring universe for over 100 years. And, Izzo’s one NCAA title, six Final Four appearances, 11 Big Ten regular season and tournament crowns, 17 consecutive NCAA Tournament bids and eight National Coach of the Year awards make the Iron Mountain native one of Michigan’s most prominent sports figures. So, it all makes perfect sense.

Michigan State’s journey to the 2009 Final Four at Ford Field in Detroit and most recent national semifinal appearance the following year back in Indianapolis, ended on courts made by Connor Sport Court International Inc., located in the heart of Iron County. Connor Sport has been in business since 1872 and in 2005 was named the official supplier of courts for the men’s and women’s Final Fours.

Both U.P. companies have amassed an astounding list of venues they have equipped—from high schools and colleges and professional facilities to the Olympics.

During the Spartans’ last practice before defeating the Gators on the Horner floor that momentous Monday night in April 2000, Izzo commiserated with his equally renowned boyhood rival, former Iron Mountain High School and Northern Michigan University teammate and best friend, Steve Mariucci, who at the time was the head coach of the San Francisco 49ers.

“We were laughing about it, saying me, you and this floor were made up in the U.P.,” Izzo says. “I always knew about the floor companies up there and there’s no question that when I’m watching a Final Four or an NBA event, I take a lot of pride in it, being a Yooper.”

Proximity to a select variety of hard maple trees, which thrive in the U.P. climate, is the reason Michigan has become the world leader in athletic flooring.

“Hard maple trees obviously grow south of there, as well, but when you go that far north the growing season is real short,” says Jason Gasperich, Connor Sports’ sustainability director. “So, what happens is you end up with a very tight-grained, dense hardwood.”

The old-growth forests have been replanted numerous times by an industry that has been at the forefront of renewable resource development. Some 40 different sawmills supply the lumber and a minimum of 30 trees—roughly 25 years old and up—will be used to make the court on which the Final Four will be played at Lucas Oil Stadium in Indianapolis, April 4–6.

Michigan State’s court has been taken apart and put back together countless times between non-sporting events, such as commencement exercises and concerts.

According to MSU Deputy Athletics Director Greg Ianni, who oversees the Spartans’ athletic facilities, Horner has taken the floor back to the U.P. to be refurbished on numerous occasions, though it is nearing the end of its life expectancy.

After the surface is replaced in the next year or so, parts of it will be put on permanent display, others stored in the school’s archives, and “pieces will be made available to our fan base,” Ianni says. “The quality of the court has been terrific, and the irony of the fact that this floor was built in the Upper Peninsula of Michigan where our head basketball coach came from, is quite unique.”