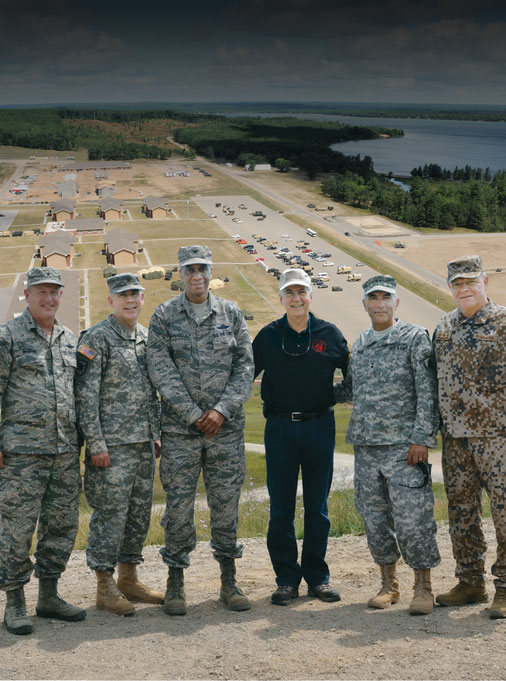 Northern Michigan is a destination for outdoor lovers—paddlers, campers, fishermen and cross-country skiers—and for military convoys carrying camo-clad soldiers to the largest National Guard training facility in the U.S.

Camp Grayling Joint Maneuver Training Center’s 147,000 acres sprawl across Crawford, Kalkaska and Otsego counties, neighboring Hartwick Pines State Park, the AuSable River, and Lake Margrethe. Since 1913, when lumber baron Rasmus Hanson donated 13,000 acres for a state military training grounds, the base has grown into a year-round facility with a $30 million impact on the community. It is utilized by the Army and Air Force National Guard, all branches of the military, FBI, local law enforcement agencies, Department of Homeland Security and foreign military units.

The 24,000 personnel who trained there this year tallied 358,000 man-days (one soldier on the ground for one day), a 62 percent increase over 2014. It’s a goal of Maj. Gen. Gregory Vadnais, Michigan’s adjutant general and director of Military and Veteran Affairs, to raise that throughput by marketing Camp Grayling and improving its assets to meet changing demands.

Vadnais, a Lansing native with a bachelor’s degree in sociology/psychology from Central Michigan University, has seen the Guard’s role evolve since he started his career with the military in 1970. “The National Guard’s mission is to fight our nation’s wars—we are the operational reserve of the United States military—defend the homeland and build a global partnership, something we’ve been doing for 23 years,” he says. Michigan’s State Partnership Program partners with Latvia and Liberia, as well as Canada, Denmark, Hungary, Poland and Estonia, and all sent military personnel to Camp Grayling for training this year.

The Michigan National Guard operates a counterdrug team and responds to national disasters like Hurricane Katrina, where Vadnais was Joint Task Force-Cyclone commander. The Guard’s peacekeeping role has grown, and since 9/11 it’s been mobilized to combat terrorism and put boots on the ground in Iraq and Afghanistan.

These duties require specialized training and Vadnais cites Camp Grayling’s competitive package, including a counter improvised explosive device training area, firing and tank ranges, a Simulation Center with state-of-the-art virtual trainers, and one of the newest Combined Arms Training facilities in the country. “We’ve got 26 buildings designed for units to come in and train in an urban setting to replicate the sights, sounds, smells and environment that our soldiers would face in actual combat.”

Sheer size is a plus. “It’s 50 miles from north to southwest,” Vadnais explains. “We can put units at the doctrinal distances that they would actually be experiencing in actual combat. We have a large airspace, particularly with the Alpena Combat Readiness Training Center.” Another advantage Camp Grayling has over facilities in southern climates: winter training conditions. The base can bed 8,000 soldiers in the summer and 4,000 in the winter.

Several times a year Camp Grayling, under Installation Commander Col. Tom Perison, opens its gates for public tours. The outreach is important, says Vadnais. “The Grayling community is a part of that installation. They live with it. They’ve been great partners.

“I love telling our story, because it’s a great story to tell.”