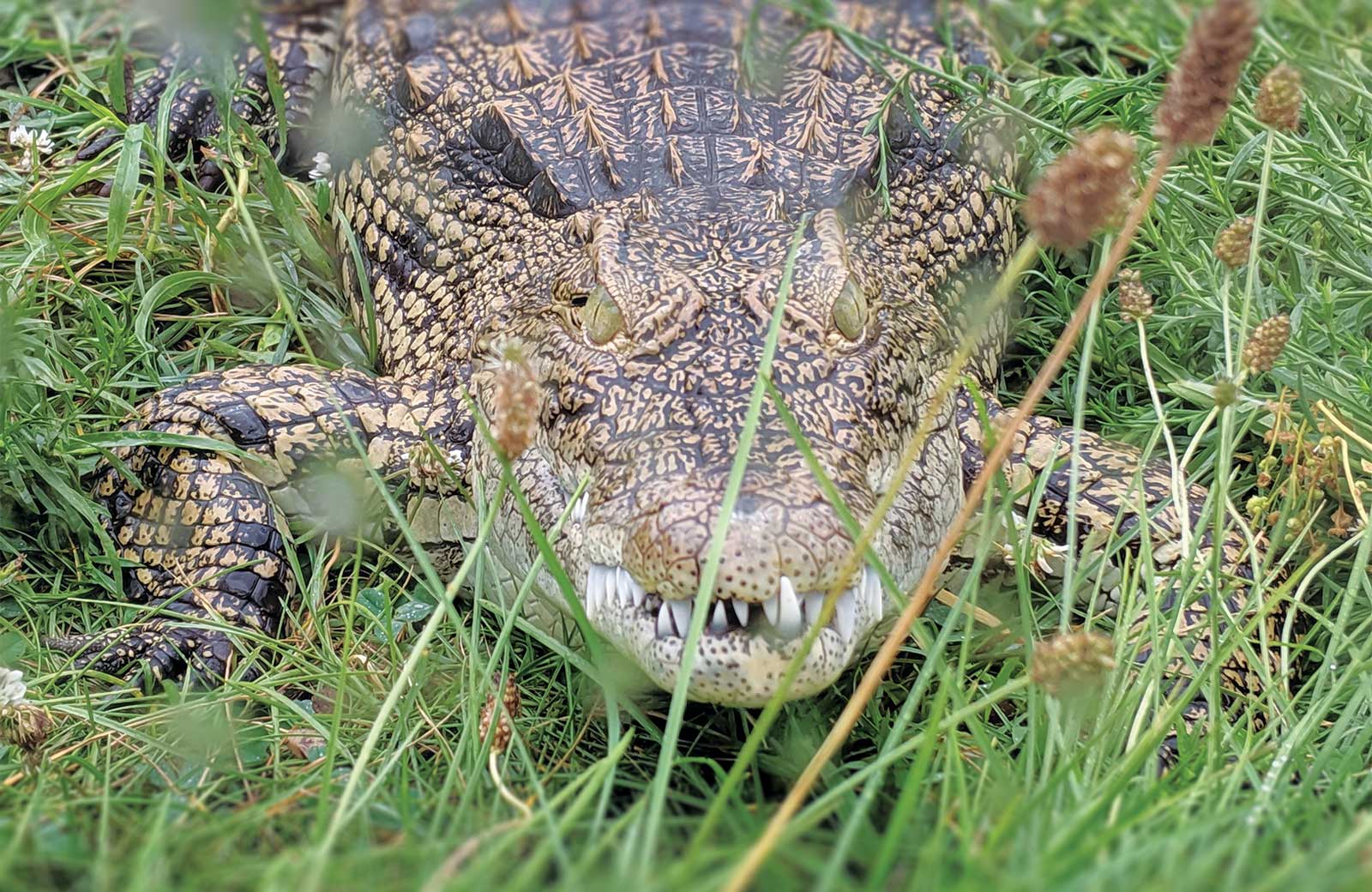 When we think of alligators, we’re flooded with imagery of sunbathing crocodiles on southern golf courses or Everglades-dwelling animals we’d just as soon not have a run-in with.

But in Athens, Michigan, alligators are not only living and thriving, but people are actually hoping to have a real-life encounter with these prehistoric-looking beasts.

When David Critchlow was a FedEx delivery man, he enjoyed chatting up people on his route, and while there were always interesting stories to hear and packages to deliver, a weird, but common, thread started to arise.

“Dad would see a package from an exotic pet supplier and realize he might be delivering a snake,” said David’s daughter, Lina Kelly, the director of animal care and enrichment of Critchlow Alligator Sanctuary. “As time passed, he’d start chatting to folks, and the conversations changed to ‘hey, do you know anyone who wants a snake?’”

Unsurprisingly, many people who thought a snake would be an interesting pet were less interested when that same pet began to outgrow its habitat. David was always an animal lover and outdoorsy sort, and he eventually started offering to take in the newly homeless reptiles.

“At some point, we had dozens of snakes,” remembers Lina. “Growing up, there were always reptiles around. It felt super normal.”

One day, a new request came in, as someone asked David if he knew anyone who could take in an alligator. While David had never owned an alligator before, his heart couldn’t take the idea that the animal would be put down because its owner hadn’t thought through the consequences. David figured out what it would take to make a suitable environment for an alligator and become a new foster owner.

Little by little, word spread that there was a guy who would take in alligators, and the family eventually had 10 to 30 of them housed in fenced-in areas in the backyard at any given time.

“Eventually, people would just drive up to the house and ask if they could go take a look at the alligators,” said Lina. “We’d give them these little tours and tell them about each alligator’s story and what we knew. That’s how the sanctuary got started.”

In 2007, David made his informal reptile shelter into a full-time sanctuary. The family learned about alligators, snakes, and even tortoises, as new members continually found their way to the Critchlows. It involved extensive research, along with reptile-related workshops and conferences, to understand the animals, as well as finding out how to best feed, house, and even train them. The Critchlows never buy or sell any of the animals in their care—all are rescues.

“We’ve learned so much over the years,” said Lina. “And it’s important always to be learning more, so we can help as many animals as we can.”

The sanctuary has grown into a home for turtles, tortoises, snakes, and nearly 200 alligators in the past decade. All the alligators are given names, but training them to learn their names happens when they are around 5 feet in length. These include Godzilla, an 11-foot-long and 500-pound fella, and Medusa—named because she’s not exactly attractive and is a little on the cranky side. Another, named Grace, is a 100-pounder who came to the sanctuary with a missing left foot. She’s been trained to lie still for medical treatment, a positive sign for some additional training David looks to do.

If it sounds like a lot to do, it’s because it is. So, to round out the crew, Lina, along with her nephew (Alex) and her brother (Peter), all came on board to help with the family business. They’re committed to making education a huge arm of their mission, with David doing hundreds of school and community presentations a year.

“A little baby alligator is cute. There’s no denying it. But you have to think of the animal and be ready for when that baby grows up,” said Lina. “We love what we do, but in some ways, we’d rather not be in the reptile rescuing business. We’d rather have people make smarter decisions about whether or not they’re capable of the commitment.”

For now, the need is still there, and the Critchlow Alligator Sanctuary remains a safe space for displaced reptiles. It’s an unlikely place where these animals can live out their lives while enriching the lives of those who make the visit and are willing to learn.