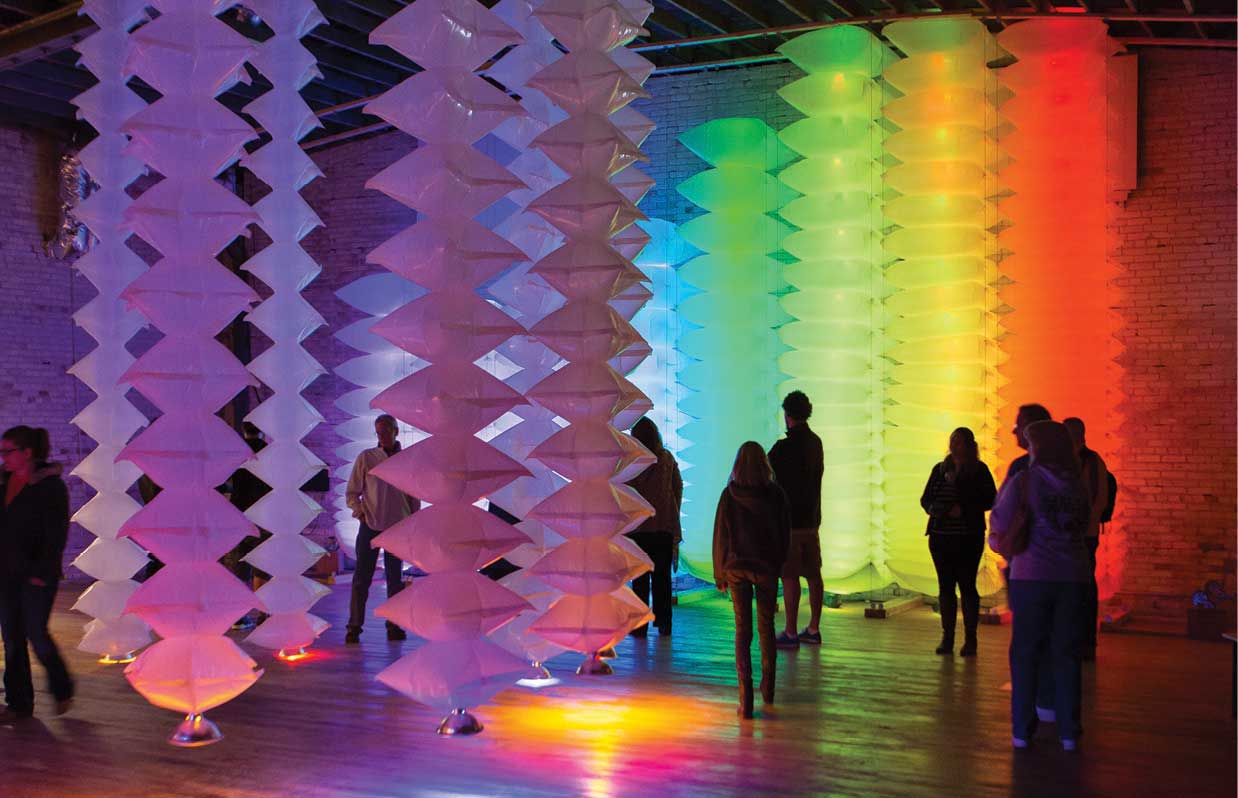 Coined the largest open art competition in the world—Grand Rapid’s ArtPrize has made its mark on the art world. It has been covered by the likes of The New York Times and GQ and lauded as both a great art experiment and lambasted as the art equivalent of a reality TV show.

The art competition opens up to any adult artist with the $50 entry fee and a venue willing to act as its pop-up gallery for the event. When it launched in 2009, no one knew what to expect, but after the first week local restaurants had run out of food, hotels were booked solid and over 200,000 people came from around the country to check out the phenomenon. The big twist is the two $200,000 grand prizes and eight category awards, resulting in more than $500,000 awarded by both the public and a jury of art experts.

Whether you love the artful canvas that Grand Rapids becomes once a year or prefer your art in a climate-controlled museum amongst whispered commentary—ArtPrize has some very real rewards for Michigan artists.

“A large number of people see my work at ArtPrize. It is a large-scale event by any measure,” says John Dempsey, who lives on the Ocqueoc River and is a member of Presque Isle Electric & Gas Co-op. “The number of people who come to see ArtPrize is extremely large compared to all of the other exhibition opportunities available to the vast majority of contemporary artists.”

A Traverse City artist and member of Cherryland Electric Cooperative, Royce Deans says that with the sheer volume of people having exposure to his artwork, the feedback is immediate and thrilling. “ArtPrize is a good place to try out some new ideas in front of people. It can be a little dangerous.”

The opportunities that ArtPrize exposes participating artists to can be anything from potential buyers, connections with fellow artists and even future employers. Grand Rapids artist and member of Great Lakes Energy Cooperative, Lily Lihting Li Kostrzewa credits her current teaching position at Kendall College of Art and Design to her participation in ArtPrize. Lily’s daughter, Isabella Kostrzewa, entered the ArtPrize young filmmaker awards and won second place. Her prize allowed her to purchase video equipment to continue her passion.
While exposure to a massive audience and opportunities is rewarding, many artists have also benefited on a very personal level.

“I gained a lot of confidence as an artist,” says Craig Snook, an artist who splits his time between Saginaw and Lakeview, and is a member of HomeWorks Tri-County Electric Cooperative. “It was a great learning experience
and it is fun being known as an ‘ArtPrize artist’.”

Colleen Whittaker, a Traverse City artist and member of Cherryland Electric Cooperative, says overhearing people comment on her artwork allowed her to capture uncensored opinions from the public. “The feedback was overwhelmingly positive, but the ones I remember are the critical comments—which I keep in mind while creating new work. Feedback from such a wide variety of people is invaluable in my quest to create art that appeals to a wide range of people while still being true to my artistic vision.”

September 2022
Share your favorite “Healthy Living” recipe with us by Nov. 1 and you could win a $50.00 credit on your electric bill. Plus, there’s...