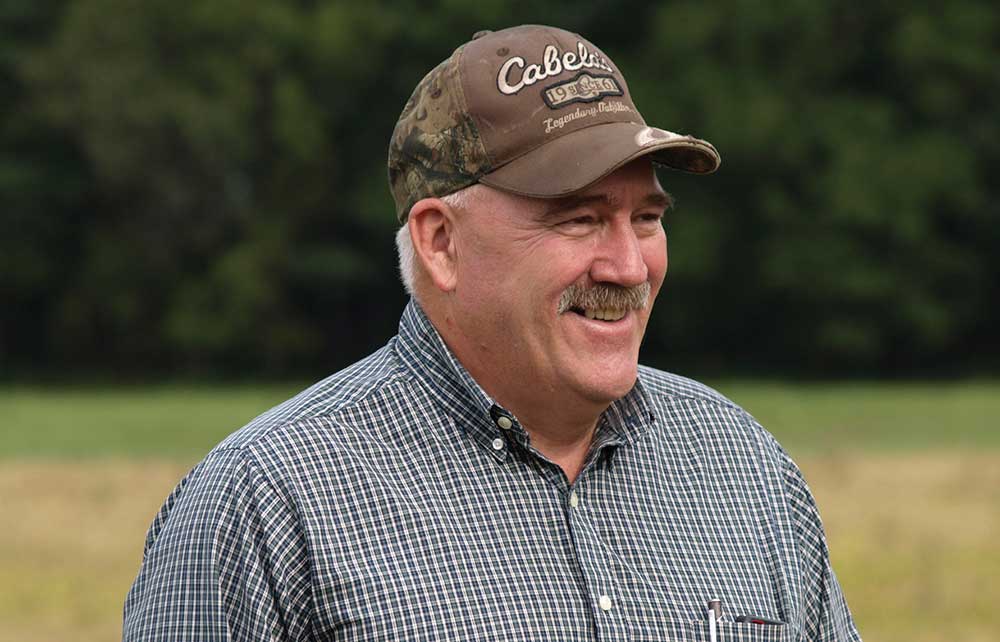 We can grow more food, but we can’t grow more land. So, how do we protect our planet and get the most out of every acre? It starts with healthy soil. Soil is everything to a farmer. It houses the nutrients, minerals and water for crops to grow. Essential nutrients like nitrogen, phosphorus, potassium, magnesium, calcium and sulfur are the life-blood of every plant and are crucial to their survival. When the soil is lacking any of these key nutrients, a farmer’s crops will know it.

Brian Stratton knows this all too well. Stratton is a third generation farmer in Vestaburg, MI, and a member of HomeWorks Tri-County Electric Cooperative. His family began farming the area in 1909, and Stratton continues to cultivate the soil—over 800 acres of it. His crops, mainly white winter wheat, dry edible beans and corn, help feed people in the United States, but also in places like Italy, Spain, China and Pakistan.

Stratton leases 80 acres of farmland from Wolverine Power Cooperative near its Vestaburg Power Plant. He started farming this ground in 2010, planting his rotation crops as well as rye and switchgrass wildlife plots. After testing the soil, he found that it was low in calcium and sulfur. “With low calcium and sulfur levels, you aren’t going to be able to take advantage of the nutrients that are there,” Stratton explains. “You’ve got to have all these things balanced as much as possible for the whole system to work efficiently.”

So, why was the soil lacking sulfur? A big reason is because coal-fired power plants have greatly reduced sulfur emissions into the air. When the Clean Air Act Amendments were passed in 1990, coal-fired plants were required to reduce their sulfur dioxide emissions. Over time, new rules continued to decrease sulfur dioxide emission limits, ultimately requiring coal-fired plants to install environmental control equipment, such as scrubbers, to meet the new limits.

An unintended result is that crops are no longer receiving sufficient sulfur from the atmosphere.Coal-fired plant owners, such as the Ohio Valley Electric Corporation’s (OVEC) Kyger Creek and Clifty Creek Plants, of which Wolverine is a partial owner, have spent over $1 billion installing environmental controls to capture and remove sulfur dioxide emissions. A process known as flue gas desulfurization (FGD) scrubs the sulfur dioxide from the power plant exhaust by using a limestone slurry that contains calcium. The sulfur and calcium react to produce calcium sulfite, and then oxygen is added to create calcium sulfate, otherwise known as synthetic gypsum.

This high-quality gypsum is becoming a hot commodity for beneficial reuse in everything from wall board to soil amendment fertilizers. For a by-product like synthetic gypsum to be considered for reuse, it must provide a functional benefit to end users and meet or exceed the specifications of the virgin material that it is replacing.

In fact, the Michigan Department of Environmental Quality (MDEQ) is a strong supporter of beneficial reuse programs. Duane Roskoskey, with MDEQ’s Office of Waste Management and Radiological Protection, said they promote the beneficial reuse of industrial by-products such as FGD, coal ash, cement/lime kiln dust, foundry sand and paper mill sludge. “Since 2009, the amount of industrial by-products reused in Michigan has more than doubled to over 900,000 tons per year,” Roskoskey explains. “The MDEQ recognizes the benefits of adding FGD to agricultural soils—FGD contains both calcium and sulfur, which are needed micronutrients, for most crops.” Over 36,000 tons of FGD were reused in Michigan in 2014.

Coriell decided to work with Charah, a company based in Louisville, KY, that provides coal combustion product management and power plant support services for the coal-fired electric utility industry. While Charah has been around since 1987, they just recently began manufacturing a product called SUL4R-PLUS® Fertilizer, a patent-pending pelletized calcium sulfate product made from synthetic gypsum. “Charah may be new to gypsum,” Coriell says, “but they’ve been in business a long time and have an innovative product that is very attractive. They have a newer process in the market and it is working.”

Stratton agrees. He has been using SUL4R-PLUS Fertilizer on his crops and is currently participating in a yield study with Charah to gather data and measure its effectiveness on the property he leases from Wolverine. “I like the pelletized product because it’s a much friendlier product to handle,” Stratton says. “It spreads more evenly and you don’t have the dust to contend with.” Results from the first year’s use are coming in and, despite a heavy dose of rain that caused root rot to his cranberry beans, the yield results look promising.

With the new products on the market today, like SUL4R-PLUS, Stratton says his crops are getting the same sulfur they used to from the atmosphere, but now it’s through a different route. The key is to replenish the nutrient levels in the soil so plants can achieve maximum growth. “With farm crop plants, it’s the same as with our own bodies,” Stratton explains. “The more attention you pay to your own nutrition, the healthier you’re going to be. It’s no different for a plant.”