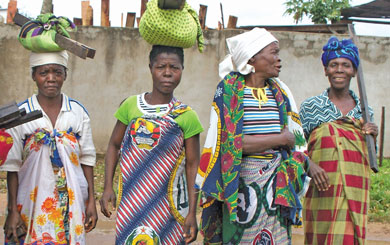 A Michigan logger makes life better in a small town a world away.

When Jim Kirt left the family farm in Leelanau County, he chose a path less travelled. Like his old home, his new one sat in close proximity to water.

The similarities, however, abruptly ended there.

After logging across Michigan for 15 years, Jim yearned for something bigger than himself. He felt called to be a Christian missionary, and what better place to serve than Africa?

In early 1999, Jim relocated his sawmill business to central Mozambique on the banks of the mighty Zambezi River, which gathers water dropped by the magnificent Victoria Falls upstream in Zimbabwe.

On the outskirts of a small village called Morrumbala, Jim lived in a tent for five months with his wife Eileen, whom he had recently met and married in Africa. Together, they built a house, and with the aid of Jim’s sawmill, they would bring the gospel and employment to the people of Morrumbala.

The mill, known as Kalibu Timbers, changed all that. It was a catalyst for economic activity in the area, and provided employment for 25 men.

Soon, carpenter “shops”—one man with a handsaw and planer huddled under the shade of a mango tree—sprang up around the village, where wood from the mill was transformed into simple furniture, doors and window frames. Employment also brought income and trade. The mission provided training and educational opportunities in support of economic development.

For the first four years, operating the saw mill was a labor of love for the Kirts’. Diesel-powered generation made it possible to run a saw and keep saw blades sharp, plus provide about two hours of electricity to the house each night. The rest of the work was manual.

Electricity was available in the village on a limited basis, but had not yet extended to the mill site. All that changed in 2003 when government inspectors, noticing the positive economic impact the mill was having on the local economy, offered to extend electric service in the village and out to the saw mill for free.

Reliability has been surprisingly good since then, although frequent power surges required the installation of protective gear around new electric power tools at the mill. The utility also has a “maintenance day” every three months, when it cuts off all power for an entire day—usually a Sunday.

The mission also benefited, with the building of a new fully-electric church, complete with a projector, copier and computer. The sawmill followed by adding new equipment. Sanders, table saws, joiners, and a new electric-powered mill helped boost productivity and capability. The Kirts’ also acquired a few electric appliances in their home and started to feel like they had returned to at least the 20th century.

While the mill and mission don’t have power outages resulting from heavy wet snowstorms like we see in northern Michigan, the business of electricity in rural Africa has its own unique challenges. For instance, industrious locals once drained oil from the primary transformer serving the area, and power was not restored for six weeks. On another occasion, the mill lost power and called in the outage to the utility. After getting no response, the Kirts’ discovered that a utility employee had removed a number of fuses to re-sell. After a lengthy discussion, the employee returned the fuses. Just this past Christmas, a transformer failure resulted in a week-long power outage that ran through the holidays.

A relatively small, long-lived and slow-growing tree, this blackwood has an esteemed place in history that dates to antiquity. Egyptians were so fond of it they sealed blackwood artifacts in their tombs. Ancients called it the “musical tree” because the dense, oily heartwood produces a beautiful sound when used for wind instruments. It’s a favorite for clarinets and bagpipes, and Luthiers treasure it for making stringed instruments, such as guitars. It’s also the wood of choice for custom billiard cues, knife handles, and fine turnings such as extremely thin finials and executive ink pens. In Africa, hand-carved blackwood figurines are a tourist favorite to this day.

This brings our story full circle. In need of a distributor for their blackwood and other exotic woods harvested around Morrumbala, such as Panga Panga and African mahogany, the Kirts’ turned to their niece, Cherryland Electric Co-op member Rachel Stivani.

Like her uncle, Rachel took a leap of faith. She knew little about wood and less about running a business, but given the niche market served and small order sizes, Rachel helped her aunt and uncle launch a web- based business named “Blackwood Source.”

To keep overhead costs down, she keeps inventory in her garage and at a small storage shed south of Traverse City. Since launching the business, Rachel has filled orders from all but two states and shipped wood to every continent except Antarctica.

Though web-based, Rachel has developed many personal relationships with customers who are eager to share stories and samples of their woodworking projects. Popular uses for the wood she supplies include game calls, bagpipes and executive ink pens.

Given its natural beauty, it’s almost impossible not to become mesmerized by the blackwood species­—especially when carefully worked by a master craftsman, and Rachel has not been immune from catching the bug. She recently completed an introductory wood-turning class and joined a local club.

Back in Africa, strong worldwide demand coupled with agricultural expansion has raised concerns about the future sustainability of blackwood. Mill operators, like Kalibu Timbers, conservation groups, and governments across Africa are implementing practices that will allow the trees to flourish while maintaining an important source of revenue.

As for Jim and Eileen Kirt, they are ready to start a new chapter in their lives and plan to relocate stateside early this year. Their departure will mean the end of Kalibu Timbers, but not the mission, as a new couple has stepped in to continue the good work started by the Kirts. Eventually, when existing inventories have run out, Blackwood Source will shut down, too.

The Kirts’ do plan to return to Mozambique for short visits in the coming years and stay connected to the mission they began so many years ago. For them, it’s been a fascinating and rewarding journey that has touched many lives, which is what often happens when you choose a path less-travelled. Visit cherrylandelectric.com to see more pictures of the mission, sawmill, and people of Morrumbala.