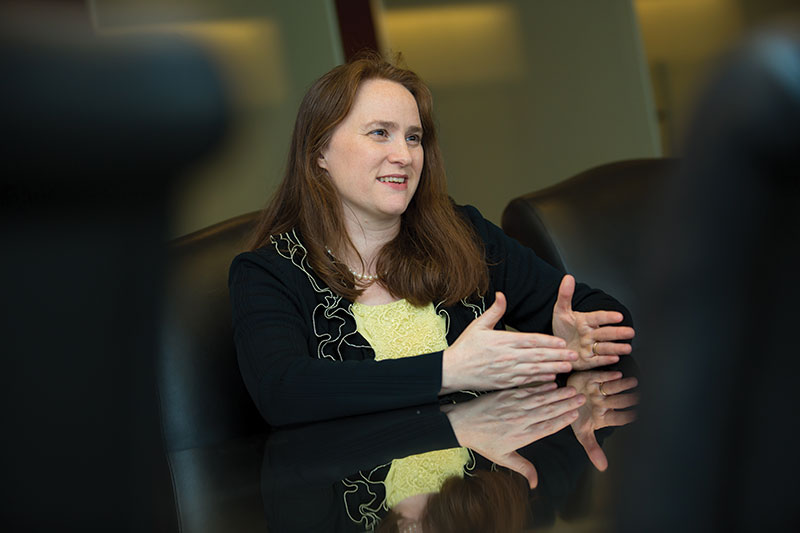 Often referred to as Michigan’s “Energy Czar,” Valerie Brader chuckles at that moniker. She appreciates the respect, but prefers the title that Gov. Rick Snyder gave her, executive director of the Michigan Agency for Energy.

Brader, 38, is the first boss of a brand-new agency—an acknowledgment by Snyder that keeping the lights on for Michiganians deserves the undivided attention of a high-powered executive. Brader will spearhead, among other things, the effort to keep the juice flowing while Michigan, facing federal mandates on emissions standards, finds cleaner energy sources than its coal-fired power plants.

“That’s our first big challenge,” Brader says. “That’s the issue that will have the greatest impact.”

Because of EPA air-quality requirements and the aging of conventional facilities, the state must close 10 coal-fired plants (nine in the Lower Peninsula and one in the Upper Peninsula) within the next few years. Combined, these plants currently supply electricity to more than 1 million customers. Snyder plans to wean Michigan’s electric plants off coal and onto cleaner fuels, such as natural gas.

Meanwhile, the state’s two largest energy suppliers—Consumers Energy and DTE Energy—see a looming crisis. They predict that, absent proper management of the transition and careful attention to other energy challenges, rolling blackouts and electrical shortages could become a routine part of life in the state.

Averting that crisis, Brader says, will require a multi-pronged approach involving reducing energy waste, finding the right place for renewable energy in the mix, and balancing the pros and cons of utility regulation versus commercial customer choice.

Brader has been with the Snyder administration since 2011, most recently as a deputy legal counsel and senior policy adviser. Before that, she was the chief energy policy officer at the Michigan Economic Development Corporation. Brader also practiced environmental and corporate law, and was an adviser to former Idaho Gov. Phil Batt.

Snyder has described the new agency, which will become part of the Department of Licensing and Regulatory Affairs, as one that “responds to the energy challenges that we know are before us.” Choosing Brader to head the Agency is a recognition of both her energy policy expertise and legal skills, he said.

Brader and her husband, Ted, have a 2-year-old son, Finn. She commutes to Lansing from Ann Arbor every day. The high-powered job, the family, the commute…It’s no wonder that when asked what she does in her spare time, Brader offers her signature laugh and a “spare what?” look.

The one person, Brader says, who doesn’t acknowledge that she is juggling a lot of balls in the air is Finn.
“He’s sure the most important thing in my life is him.”

Considering the energy issues Michigan must confront in the immediate future—power plant closings, pressure to deregulate the utilities, etc.—one might wonder why Brader took the job in such a tumultuous time.

“Because it’s also the most exciting time…,” she says. “Big challenges offer the biggest opportunity to make
a difference.”