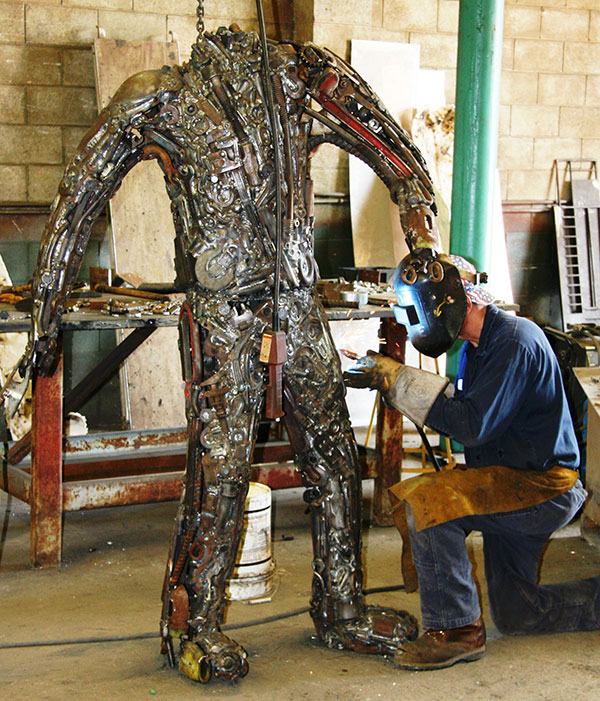 While he makes his living from his 37-year-old business, Moran Iron Works, Tom Moran has had a second career as a teacher. His first student? Tom Moran.

The son of a career lumberjack, Moran always had an interest in metalwork, but with college an unlikely possibility and his high school no longer able to support metals classes, he used some of the abandoned tools in his shop class to teach himself how to weld.

“I started tinkering with some tools and working on broken chairs in classrooms,” says Moran. “Then, it was fixing trailers for teachers. By the time I graduated, I’d become the unofficial school repairman.”

After graduation, Moran worked in the logging business with his father and at night made his own tools, practiced his craft and eventually started his own business. The land where he first built, an abandoned dairy farm in Onaway, MI, has since undergone 29 additions.

As his business grew, he was faced with the challenge of finding qualified welders and metalworkers in northeast Michigan.

“While we’re in love with northeast Michigan, it’s hard to recruit skilled tradespeople in this area of the state,” he explains. “We found the best way to make sure that we had a qualified workforce was to create our own training program,” Moran says. “We started evening classes for people with potential and interest. Some were folks we knew we’d be hiring and others were members of our community, like farmers or loggers, who wanted to be more self-sufficient.”

The training program is now a full-time school that is staffed by Moran Iron Works employees—10 full- and part-time teachers.

While Moran provides plenty of opportunities to teach his beloved trade, he’s humble and certain there is always more to learn.

Moran Iron Works has recently embarked on a large-scale project with Shepler’s Mackinac Island Ferry, to build their most recent ship—an 85-foot, all-aluminum ferry christened “Miss Margy” that is thought to be the first ever built entirely in Michigan. While Moran Iron has worked on many ship extensions, retro-fittings and conversions, this is the first vessel they’ve built from start to finish.

“Every project is unique and there is always something to learn,” Moran says. “With a project of this scale and scope, where you’re integrating several complex systems, you’re going to run into challenges. But in the end, the old lesson of ‘a job well planned is a job well done’ had really seen us through. Ship building is an art. The teams at Moran Iron have really turned it into an art and a science.”

When he’s not busy building ships, turbine components or customizing industrial and commercial fabrication jobs, Moran creates large-scale art projects for the annual Fourth of July parade in Onaway and as donations for area fundraisers.

“Maybe the art has gotten out of hand over 45 years,” Moran jokes. “Every year I say I’ll do something smaller and easier, but it hasn’t really gone that way.”

Maybe that’s the next lesson for Moran, but for now—the bigger the better.